How To Write A Book

She has written seven novels, a book of thirteen short stories and a small book of poetry.

This is part one of four on how to write a novel.

Part Two - How To Write A Book Draft

Part Three - How To Write A Manuscript

Part Four - How Do I Get A Book Published

Of course, the first thing any writer needs is a story. Sounds easy? It is not always easy to find a subject that you are not only passionate about but also capable of writing approximately eighty thousand words about that subject. If you have ideas, my recommendation to you as a professional writer, is to get started. Sit down and write. It is that simple. If you don't try, you will never succeed. A story will not just write itself. It takes time and dedication to actually get it all into text. Writing is not a hobby, it is a job. If you already have a full-time job, you might want to rethink the idea of actually writing a book. It will be like working two jobs at the same time. Serious dedication is the only way a writer can succeed in such an overwhelming task of writing a novel worth reading. If you want a hobby, collect stamps, coins or pick lint off the dog.

First things first. If you are serious about writing, you need a couple of things to start out; a real paper notepad and a real ink pen. Old fashioned, yes, but they are definitely the best way to go. They will be your constant companions for a long, long time. Long gone are the days of long-hand manuscripts, carbon papers, triplicate copies, white-out for errors. All of that has been replaced by the modern computer. But some things, such as scribbling ideas, can never be replaced by a computer. I recommend a pen and not a pencil for this stage as there is nothing worse than the lead breaking in the middle of an idea. A pen may run out but that would be a rare occurrence. Doodling is still the best way for thoughts to form on paper. Doodling words is the same. Always available, you never have to think about turning the real paper notepad on, worry about it crashing before you saved the page of ideas and having the computer blow up before a back-up could be made. The computer is useful only for typing up those words, later, when the thoughts and ideas are clear. 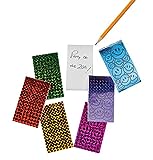 Fun Express - Smile Face Prism Notepads (6dz) - Stationery - Notepads - Notepads - 72 Pieces
I always keep a good supply of small notepads around the house, in my purse and in my pocket. These small size, 20 page, spiral bound notepads are great for jotting down random thoughts on a work in progress.
Buy Now

For a few days, regardless of the strange looks from family, friends and strangers, wander around with the paper notepad and pen. You never know when a great idea will strike you. Do not be afraid of what others think as you mumble to yourself and make quick notes, sometimes even giggling madly over some random thought. Writers are known for their eccentricities. Just do it. Do not worry about being rude when people ask you what you are doing or writing. Wave them off with a quick flip of your hand until you are finished writing whatever thought had entered your head. It is important to get the fresh idea down without interruptions from outside sources such as people, pets, telephones, doorbells or any other annoyance this noisy world of ours can throw at a serious writer. It is way too easy to get sidetracked and lose that golden train of thought. I personally have no telephones and my doorbell is turned off when I am working. Nothing is more important than the job at hand; writing, thinking and creating.

Do not give up.

Do not despair of the first stages of writing, sometimes this process can take months instead of just a few days. Writing is not "Fast Food" work. It is long, tedious and sometimes very frustrating. Arranging your thoughts and ideas is a major part of the artistic process of writing a full-length manuscript. Hours can go by while you think and yet sometimes after hours of thought, not a single idea will form. It is all part and parcel of the process, even the failures. At times it will seem to be a daunting and impossible task, but if you stick with it, it will be done....in time.

An important process of writing a novel is continuity. If a car was blue at the beginning of the story, it should remain blue throughout the tale, unless, of course, somewhere in that story the car went to a paint shop and had a colour change. The same goes for characters. The hair, eyes and basic description of each character has to remain the same for the whole story or at least have an explanation of why something changed during the tale. If the hair colour changes without explanation, subconsciously the reader sees it and it can ruin the whole reading experience when their minds cannot accept the unwarranted change. For this reason, the notepad notes of descriptions of the characters is very important. Each character should be described on paper for easy reference. Write the descriptions of each of your planned characters and then add on if new ones appear as the story is being written.

The appearance of the characters can be had from your mind, made up from some vivid idea in your imagination. You can also use descriptions of your friends as an aid to memory if they fit the "type" of character you have in mind. Some magazine people, models, movie stars or even someone you saw at a coffee shop can be used as well. Regardless of where you found the characters, they MUST remain consistent throughout the story. Notebook descriptions of characters, scenes, cars or anything that may be used during the tale make life easier when you cannot remember the exact details. Without such quick notes, you may find yourself skimming through the manuscript, frustrated, trying to find a description you wrote months before.

Once you have made a bunch of notes and scribbles, then the hard part really begins, sitting down for hours and hours at a time for days on end, weeks, months, years and actually typing out the story from beginning to end. It is a long and challenging process, sometimes seemingly endless. Most people do not realize how much work actually goes into a book that they have read. A book that takes a person a few days to read most often took a writer over a year to write and perfect. When you write that first book, you will appreciate the writers of the books you have read and will read in the future.

Do not stop carrying that paper notepad and pencil with you. You will always need it during the long process of forming your story. Remember, some of our best thoughts come to us in the bathroom, so do not leave your notebook and pen behind. Take it with you for those bathroom breaks.