Why Is Everything Made In China Nowadays?

An Anecdote About All Things Chinese

‘We’re out of pegs,’ I shout to my husband on washday - a perpetual state it seems. I'm pegged out too, trying to find some that are still serviceable; they fall foul of the lawnmower and my teenagers eager to get their clean undies back. Ping! Ping! Ping! Plastic pegs are tugged from the washing line only to lie shattered and broken on the lawn until the remorseless mower shreds them completely.

I go to Tesco to replenish our supplies: out of stock. Sainsbury's: ditto. Hubby doesn’t believe me; he says I’m making excuses for my lousy memory - well I wish I could forget him.

‘Worldwide shortage of pegs is there?’ he sneers.

I can never do anything right in his book. If the sky fell in it'd be my fault for not being out in the garden holding it up. He says I should die so he can raise our kids properly. No wonder I call him Mr Shitler. Our house is like Stalag 17(on a good day).

Hubby eventually buys some pegs from the local Spar then it’s my turn to complain as he thrusts the virtually weightless package of pegs at me. They are tiny. You could maybe hang out some dolls’ clothes with them or a hanky or two if you’re lucky.

‘Bet these are made in China,’ I say and sure enough, it says so on the packet. ‘Ping! Ping! Ping! - pegs from Peking!’ I exclaim in a sing-song voice but hubby fails to see the funny side. He is in Herr Ubermeister mode. Still on the subject of things from China, being married to him reminds me of a saying supposedly attributed to an ancient Chinese philosopher:

Confucius, he say: ‘when wife complain about no magic in marriage, husband disappear.’

The episode with the pegs starts me thinking about China and why virtually everything seems to be made there nowadays Apparently it's because of cheap labour. I have nothing against the Chinese and I just love Chinese food but many items made in China fail to impress me,

Having no luck hanging out the washing, I decide to paint the garden fence seeing as it's still a nice sunny day. My attempt lasts all of three minutes after which time my new paintbrush snaps clean in half. Those three little words glare out at me yet again, this time from the side of the offending brush as I toss it in the bin. What a pity it wasn't as durable as the packaging it came in.

Chinese New Year is fast approaching so I decide we’ll have a Chinese tonight, in spite of my persistent bad luck with their merchandise. I’ve never been to China, although I enjoyed a Chinese meal in Chinatown, San Francisco many years ago but Ho-lee-fook, why is everything made in China so damned small? The seats on my local bus are made in China and don’t do my ample derrière any favours, the hats in Christmas crackers are minuscule and baby clothes imported from China go nowhere near your average seven pounds born British baby. It's as if the people of China went totally all out big when they built The Great Wall and haven't bothered much since.

Our evening meal confirms my suspicions. It could be Tesco’s fault but a Chinese meal (intended to serve four) consists of oodles of noodles and a few scraps of mechanically recovered shredded duck, an awful lot of packaging and not much else. Well, duck fat for a satisfying meal; that’s all I can say. Better to get some chicken breast, a pack of stir-fry veggies and soy sauce and cook up a homemade Chinese meal myself. Oh, and you don't need to get in a paddy over the rice if you buy those little microwaveable packets. I can do a great 'sweet and sour' too - an appropriate dish for hubby and me - because I'm sweet and he's sour. During the meal, he goes to great lengths to explain how you can supposedly see The Great Wall of China from the moon.

‘Why don’t you go there and find out?’ I suggest. I Google it myself later to get the facts and apparently you can’t see the wall from the moon at all. I also discover I was totally wong about the Chinese not bothering to build anything big since The Great Wall. They're still building massive long structures but this time vertically and at an amazing pace. They’re currently erecting thirty-storey skyscrapers in a matter of weeks (probably because they don’t stop for a mug of tea every five minutes like British builders).

It all makes sense I suppose because the Chinese have always been very clever when it comes to packing an assortment of little things into big boxes full of thin air and lots of bubble wrap. Now they can have the last laugh, bless them, with their impressive new skyscrapers consisting of prefabricated modules which are really just little boxes to pack lots of people into; but who am I to complain when there are more of them than there are of anyone else? Everyone needs somewhere to live and most of them will get a fairly decent view from their flat-packed high-rises into the bargain.

Chinese factories are impressive too - just watch the video at the end of this article which features one of the largest factories in the world. It employs 17,000 workers and feeds them and houses them too. You've got to hand it to the Chinese for their teamwork and organisation skills even though their pegs and paintbrushes are quite useless. This particular factory makes irons and coffee makers so maybe their electrical goods are better quality - I certainly hope so for safety's sake. Apparently, Chinese manufacturers are now making aeroplanes too and I'm sure they're very good at it - seeing as my Made in China washer managed to take off all on its own.

Chinese Plate From The Tang Dynasty

Later, I phone my cousin who works for Kentucky Fried Chicken (he thus has no illusions about the fate of animals in the food industry). He relates his own amusing Chinese tale:

A few days after a Chinese family move in next door, his beloved dog disappears. The new neighbours are friendly and hospitable and invite him round for a Chinese meal that same day. He spends all day worrying but the meal placed before him is obviously chicken (he knows because of his job) and the missing dog turns up later with all his limbs still in situ. My cousin says he likes dogs and he likes the Chinese but he wouldn't want to be a dog in China.

An Informative Film About A Vast Chinese Factory

China Is The Fourth Largest Country In The World 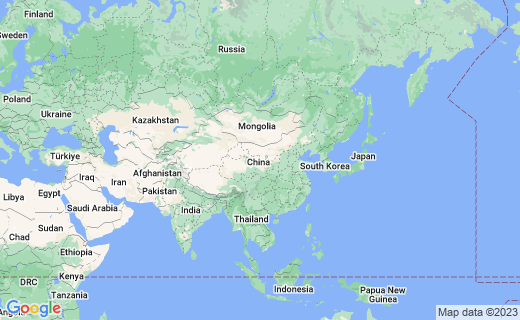 'All The Tea In China'

Because the Chinese don't seem to be particularly renowned for their red wine, I'll go and make myself a nice cup of tea - in a china cup of course.

As I’ve said I like the Chinese and I suppose it was wong of me to hold them responsible when I couldn’t get to sleep at night as a child. ‘You're still awake because there's a chink in the curtains,’ mother would often say (but perhaps they were only Peking).

And as a final word, if you don't like this article you can put it in your junk mail.