Back in 1996 DC comics, and Marvel Comics decided to merge a couple of their characters for twelve issues. This was the start of Amalgam Comics. They decided to do it again in 1997, and created twelve more mixed up books. I always enjoyed reading alternate stories of my favorite heroes, and I loved these books. It was fun seeing the different combinations that the two companies came up with. No matter how cheesy some of them may have been it was a history making event, and one that has not happened since.

In this lens I will introduce you to the visionary world that these two companies created, and the heroes that they forged. These are not the superheroes you know. Welcome to a new universe of Amalgam. Sit back and enjoy.

Amazon - Was a cross between Storm (X-men) and Wonder woman. It was written and drawn by John Byrne.

Assassins - 2 heroes named Catsai, and Dare the Terminator. Using a mix of Daredevil, and Elektra with lesser known DC characters.

Dr. Strangefate - Combined Dr. Strange and Dr. Fate. This book of mystical doings introduced the amalgam only hero of Access who was the reason for the merger of the two univereses.

Legends of the Dark Claw - Batman and Wolverine become the Amalgam hero, Darkclaw.

Super-Soldier - Captain America and Superman combine to become the Super-Soldier, drawn to look like the golden age books, and going with the story of this "classic" hero vs Nazi Germany.

Bullets and Bracelets - Combined elements of The Punisher with Diana Prince (Wonder woman).

Magneto and the Magnetic Men - Magneto and his Brotherhood mashup with the Metal Men.

Speed Demon - The Ghost Rider and the Flash combined.

X-Patrol - X-factor and The Doom Patrol mashed up.

The Amalgam Age of Comics: The DC Comics Collection

The Amalgam Age of Comics: The Marvel Comics Collection 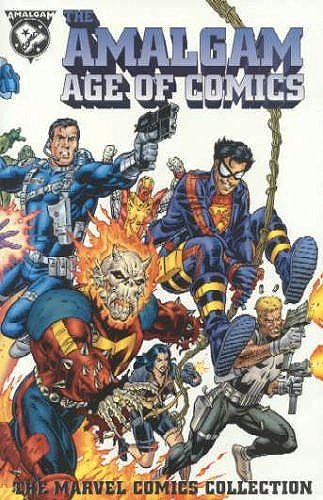 The Amalgam Age of Comics: The Marvel Comics Collection
Graphic Novel collects the Marvel Amalgams in this book.
Buy Now

A Glimpse into the Amalgam Universe

The Return of the Amalgam 1997

Dark Claw Adventures - The combination hero of Wolverine and Batman is back, and drawn in the style of Batman:The Animated Series.

JLX Unleashed - The mixed up JLA/X-men collision is back for another book.

Super-Soldier: Man of War - The Mixed up Captain America/Superman is back for another book.

Exciting X-Patrol - X-Factor/Doom Patrol mix up is back for another book.

The Magnetic Men featuring Magneto - Magneto and his altered Brotherhood back for another book.

Spider-boy Team up- Spiderman/Superboy collision is back for another book. He teams up with the Legion of Galactic Guardians 2099.

Return to the Amalgam Age of Comics (The DC Comics Collection) 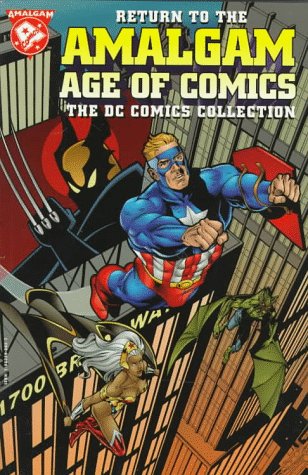 Return to the Amalgam Age of Comics: The DC Comics Collection (The Return of the Amalgam Universe)
Combining characters from both DC comics and Marvel comics, this graphic novel merges the world's best-known superheroes and villains, turning them into all-new characters. For example, Superman and Captain America become "Super Soldier". --This text refers to an out of print or unavailable edition of this title.
Buy Now

Return to the Amalgam Age of Comics: the Marvel Collection
Combining characters from both DC comics and Marvel comics, this graphic novel merges the world's best-known superheroes and villains, turning them into all-new characters. For example, X-Force and Doom Patrol become "X-Patrol".
Buy Now