Writing your book is only the beginning!

There was a time where any writer who self-published a book was thought to do so only because he or she had written a book no publisher wanted to publish. The writer would turn to one of several “vanity” publishers and pay to have their book printed and assembled. He or she would have a few hundred books produced to pass out to family and friends while experiencing the satisfaction of feeding their (ego) by telling people they had written a book. Thus the word “vanity” was attached to such writers and the self-publishing industry as a whole. This term was applied even if the author sold his books/products. Traditional publishers drilled into the public psyche the idea that any material not published traditionally was trash.

There is no other business I can think of where a person that invests their time, talent, and money to launch an enterprise or create a product is degraded by having their efforts called a “vanity” project. If creating your own business/product is a vanity act that would mean Microsoft, Dell Computers, Wal-mart, CNN, and The Huffington Post are all vanity enterprises.

Historically “creative people” have always been known to have some self-esteem issues. The bulk of their time is used to improve their craft with the hopes that someone will tell them they are talented or worthwhile.This not only applies to writers but also actors, musicians, singers, dancers, and painters, all in search of approval or validation.

Game Changers Give Birth to the Authorpreneur

With the advent of companies such as Amazon's CreateSpace, Lulu publishing, AuthorHouse, iUniverse, and many others offering editing services, press releases/promotional tools and book cover designs which rival in quality with any traditional published book; the winds of change have arrived!

Lots of writers are ignoring the traditional publishing process without even sending so much as a single query letter to a publisher. These people not only see themselves as writers but also as entrepreneurs/Authorpreneurs.

An Autorpreneur is defined as an author who creates a written product, participates in creating their own brand, and actively promotes that brand through a variety of outlets.

Sally Collins an Authorpreneur recently wrote: “People think the end game of writing a book is getting published, but it's not. The end game is making money influencing, touching, and entertaining a vast audience with your story.”

My point is self-publishing these days is no longer seen as a "last resort" or some "vanity" exercise. Many writers are looking at it as their first option. Having said that like anything in the market quality eventually rises to the top. Not all self-published or even traditionally published books are "Masterpieces" such as Snookie from the Jersey Shore, "A Shore Thing". Unfortunately books today are viewed as a success only in terms of how well they sell. It's magic when both a well-crafted book comes to light and the public embraces it. However there are many people who would be content selling a million ebooks for 99 cents such as John Locke did and earned $300k in 5 months. The goal is to get paid for your efforts no matter what your chosen field is.

Naturally not everyone is going to hit the ball out of the park but the playing field is starting to level more between those who self publish and those that are traditionally published. "50 Shades of Grey" began as a self-published book. The Daily Beast recently published an article titled How Fifty Shades of Grey Is Shaking Up the Business of the Romance Genre.

Another writer by the name of Jessica Park recently wrote an article titled How Amazon Saved My Life. In it she goes over the advantages of self-publishing.

The following comes from an article the Associated Press ran on April 16, 2013.

"I had no intentions of ever getting the book published. I was just writing it for fun," said Hoover, who uploaded "Slammed" a year ago in January. (2012)

Soon after self-publishing, people she didn't know were downloading the book — even after it was only available for a fee. Readers began posting reviews and buzz built on blogs.

Missing her characters, she self-published the sequel, "Point of Retreat," a month later. By June, both books hit Amazon's Kindle top 100 best-seller list. By July, both were on The New York Times best-seller list for e-books. Soon after, they were picked up by Atria Books, a Simon & Schuster imprint. By fall, she had sold the movie rights."

Having recently written my own book My Cat Won’t Bark! (A Relationship Epiphany), I am just now taking the plunge into the Authorpreneur arena. I plan to keep my fellow Hubpage writers posted regarding my journey as well as share with you any viable marketing tips and networking groups I discover along the way. Below are two options I have come across.

The Business of Writing... 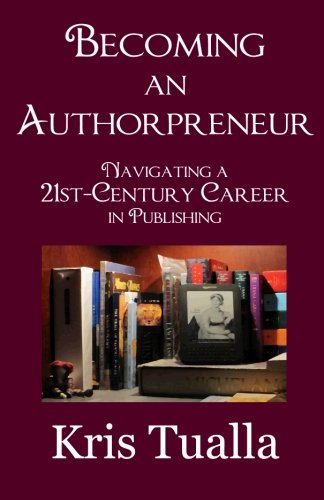