All three of these are memoirs of living in China -- rather than just traveling there on vacation. They share that at least.

All three are fascinating reads -- that, too, they share. But the oldest of the three, Sledge's, is from the months immediately following the end of WW2, when Chiang Kai-shek was still in power. Chiang did not lose to Mao until four years later, and we all know that that change in power effected a tremendous transformation in China.

The newest of the three, Hessler's, reflects present-day China, though even it was written just before the Three Gorges Dam was completed, and with the incredible annual growth rates of China's economy, one wonders how long this book's currency will last.

The middle book, Salzman's, will soon be three decades old. Mao was dead*, but China was not yet the economic powerhouse it would later become. Much of the book is about martial arts, but then so is Sledge's -- real martial arts.

* For the Mao period see #1 in this series, the book by Jung Chang.

The People's Republic of China has never considered itself underdeveloped and in need of assistance in the way that Third World countries do. The PRC is, after all, in the Second World (or First, depending on who is doing the enumeration), not in the Third. Always has been. The PRC, then, has no need for the US Peace Corps. It is a matter of face.

Except for one thing -- the PC can help in teaching China English.

So that is how Peter Hessler got to China. "River Town" is based on the diary the young author no douibt kept upon arriving in Fuling, a town on the Yangtze (aka, nowadays, Yangzi) river where it flows through the middle of China. The much small Wu River joins the Yangtze at Fuling; further east is the Three Gorges Dam, under construction in Hessler's day. Hessler is familar with river towns, having grown up near the Missouri, not far from where is joins the Mississippi, in the middle of the US. He has come to teach English Literature -- Hamlet, even (Hessler had studied at Oxford before heading east). But also to learn Chinese.

There are plenty of mundane experiences here, but the fact that they occur in China makes them interesting, as does Hessler's skill in recounting them.

One that rises above some of the others concerns a male student named Rebecca. (Hessler remarks that he had chosen his English name poorly). Hessler's Peace Corps colleague at the Fuling Education College, Adam Meier, had tried to get his students to debate something, but rather than incur scrutiny by having anyone oppose a Chinese policy, he decides to center the debate on whether America should adopt China's policy of limiting families to a single child. Rebecca opposes this on grounds that it would be inconsistent with America's freedom and its concern for human rights. Rebecca is also in Hessler's class, and the day after the debate he wants to talk with Peter about freedom. He says that there is not enough freedom in China. Hessler: "It was the first time I had heard a student speak this way, and I wasn't sure how to respond." He ends up warning Rebecca to be careful. Then he ponders the fact that Rebecca's poor performance in school is related to his dissidence. Hessler's best students have all been recruited by the Party.

It is a common experience among those who come to teach in China that they end up learning more than are able to teach. Bertrand Russell was one of the most prominent teachers to comment on this. In Hessler's case his teaching is under constraints, so the disproportion is a foregone conclusion. But the merit of the book lies in his careful conveying to his readers the many, many things he observed and learned back in the late nineties.

Eugene B. Sledge was one of the Band of Brothers, Pacific Division. That is to say that the TV mini-series based on military historian Stephen Ambrose's book about "E Company, 506th Regiment, 101st Airborne from Normandy to Hitler's Eagle's Nest," was so immensely popular and did such a good job of honoring soldiers who fought in the European theater that there just had then to be a mini-series based on those who fought in the Pacific theater. And when the producers looked around for source material, most prominent was the memoir by Eugene B. Sledge of Mobile, Alabama, nicknamed Sledgehammer.

That memoir, "With the Old Breed," is the story of a marine private at the battles of Peleliu and Okinawa. "China Marine" is a different book, a less dramatic book of course, but nonetheless immensely interesting because Eugene B. Sledge of Mobile, Alabama was sent to China right after the war ended.

Joyous that the war has ended, and has ended in victory, Sledge envisions a ticker-tape parade down Fifth Avenue. Instead: "Hey you guys, we'll be China Marines, yeehaw!!" his tent-mate shouts. They are sent to Beijing, or Peiping as it was then called, to fend off Mao, since Chiang Kai-shek is unable to do that. Brig. General William A. Worton, threatens all out war if Mao comes in, and Sledge and his mates are being sent to back up that threat. Mao decides to wait. The Yanks will go home. Meanwhile, Sledge has a unique opportunity.

Huge crowds of people holding American flags, shouting 'Ding hao (very good)' line the route into the city. Sledge and the other men wave back. His friend, Jim, repeatedly shouts "Gung Ho (work together)," unaware that this is the slogan invented for Mao's armies.

China's capital is full of interesting sights, wherever Sledge turns -- bound feet on one occasion, for example. He was also intrigued by the camel caravans driven driven into town by Mongols.

His first real Chinese friend is the mortar section helper, about the same size and age as Sledge. They teach each other

the language they speak. His friend can cook, and each morning he would prepare breakfast from packages of fresh bacon, fresh eggs, and loaves of French bread." Each Marine commonly ate six to eight eggs and an equal amount of bacon. "[M]ost of us had not eaten fresh food of any type in nearly two years or more."

there is her sister, Anna. The doctor, head surgeon at General Hospital, studied at the Sorbonne and speaks French, but not English. He replies in

French even to his much younger wife, who speaks to him in Chinese since she doesn't know French. The whole family is devoted to Mozart,

and they own many recordings, which Sledge joins them in listening to. Conversation runs from the French philosopher Descartes, about whom they

educate Sledge, to comparisons between China and the US. At one point he is asked to stay for dinner. A servant is sent off and returns with prepared

Sledge's coming home is well recounted. He registers at what later became Auburn University. In the scene shown in the series, the young woman registering him goes through a checklist to determine what courses he's had in the past. Finding nothing, she says "Didn't the Marine Corps teach you anything?" Sledge, with unaccustomed anger, replies that it taught him how to kill people. The words in the book are a little different from those in the mini-series, but the important difference is the young woman's response, which got left out of the miniseries. She apologizes. Sledge says he didn't mean to upset her. " 'You didn't,' she said, 'You made me think.' "

In 1900 a young Yale graduate, Horace Pitkin, working as a missionary in China, was killed during the Boxer Rebellion. Yale Foreign Missionary Society was founded in 1901 to carry on the work Pitkin was engaged in. The capital of Hunan Province, Changsha, right in the middle of China, was chosen as the society's home. The society later became the Yale-China Association and was informally known as Yale-in-China.

Eight decades after Pitkin's death, and about five years after that of Mao, another Yalie, Mark Salzman, arrives to teach English at a college in Changsha, to study martial arts, and to write about his experiences. His book is sometimes described as a novel about his experiences, but "memoir" seems the better term.

It is pretty funny right from the first page. He is leaving mainland China after his two years there, intending to take the train from Canton (aka Guangzhou) to Hong Kong. However there is a problem about his luggage. His seven-foot-long leather bag containing five swords, four sabres, a staff, a halberd (think axe blade on end of pointed pole), two hooked swords, some knives, and "a nineteen section steel whip" is arousing suspicion. He has documentation that these were gifts and are not items of China's heritage, but it isn't working. What does work is a demonstration of martial arts right there in the train station, suggested by a policeman friend of his.

Other vignettes are revealing in other ways. Why does Changsha have such an immense train station, virtually empty of passengers? Was this due to some corrupt city official who overbuilt in order to up his kickbacks? No, blame it on the Red Guards. During the Cultural Revolution all Red Guards had to make a trip to the place where Mao was born and grew up. This is just outside Changsha. The crush of people coming from all over China to worship Mao's beginnings was chaotic, clogging Changsha's primitive train station. But government had the answer. Build a gigantic new station. Handle the crowds and by the way let people be impressed by how efficient Changsha is. But it is very difficult to see into the future, even for government bureaucracy. The train station was finished just as the Cultural Revolution died down. No more crowds. Lots of empty space.

As for martial arts. Salzman manages to find, the grand master of the particular art he is interested in, Pan Qingfu, the "Iron Fist." Pan punched an iron plate 10,000 times a day, or so it was said. There is also an audio cassette of this book, books on tape. Read of course by the author. There is even a movie of the book, not a bad one, either. It stars Mark, and Pan Qingfu, and we get to see the martial arts. 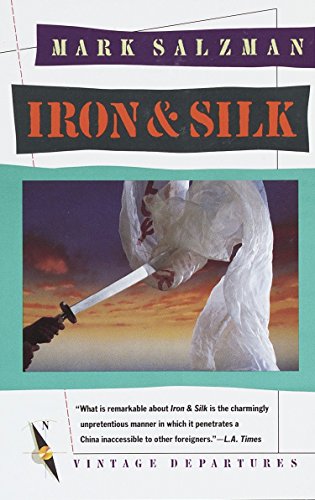 Series within series, actually. Food & Cooking, for example, then -- within that -- series on vegetables, fruits, seafood, meat, etc. Books, too. Ideas, too. Travel, too. Key virtues:. pictures, clear step-by-step text. Delicious -- whether foods or ideas! All of the series, and all of the items in each series, can be found, organized by floor, at this link: Lee White's Department Store. Happy shopping! -- everything is for free!