Books from the Heartland of America

Book Recommendations from authors who live in the Heartland of America

This article will discuss and recommend a series of books written by authors who live and work in the heartland of America, from Ohio in the east to the foothills of the Rockies in the west. I have read and enjoy books by these authors and I recommend them to you. Some are current, some are from the recent past, and some might be considered classic. The books each focus on relationships, family, and place as well on good storytelling.

I welcome your suggestions of other similar books and authors.

I took the photo above, myself, in the Heartland of America.

Book #1 in The Seasons of the Tallgrass Series from Zondervan

This book is filled with stories typical of ranch and small town life in the Kansas Flint Hills. The young country veterinarian, Mattie Evans, attempts to treat an aging horse she came upon along a gravel road. This act of good faith puts her in the center of a feud between former pro football quarterback Gil McCray and his aging father, a close friend of Mattie. For me, the portrayal of the elderly rancher was outstanding having just done oral histories with several of them, myself, shortly before reading the book. Obviously, the off and on romance that develops between Mattie and Gil is at the heart of the story of the book. The vivid portrayals of life on the ranch and nearby small town are what make this book distinctive, to me. 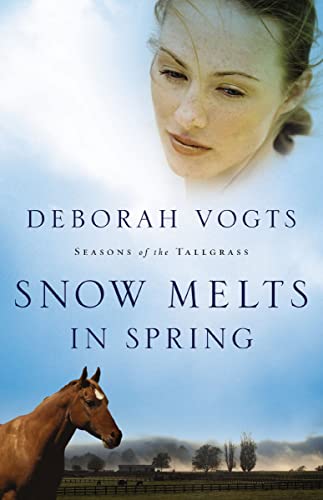 The book images above came from the website below.

"Seed of Summer" by Deborah Vogts

Book #2 in The Seasons of the Tallgrass series by Zondervan

This book, set in the same Kansas Flint Hills small town and ranch country as "Snow Melts in Spring," introduces us to former rodeo queen, Natalie Adams, at about the time she meets the new young pastor in Diamond Falls. As Vogts develops these new characters in this new storyline, she weaves in some of the characters from the first book in the series as secondary characters while continuing to share with us the special insights of someone born and raised in this distinctive prairie ranching environment. The book is written as a Christian Romance but fits well in my favorite genre, the family saga, as well. I enjoyed both books a lot and highly recommend each of them.

Seeds of Summer (Seasons of the Tallgrass, Book 2)
Buy Now

"Bearer of the Pipe" and other books by Don Coldsmith

All books of the "A Spanish Bit Saga" series

This book recommendation is really a recommendation of any book written by Don Coldsmith. A physician in Emporia, Kansas, Coldsmith became a prolific author of western fiction, served as president of the Western Writers Association, and wrote a weekly column in the acclaimed local newspaper for decades during his lifetime. I have read nearly all (if not every one) of his books and enjoyed every one I read, very much. They are written in a distinctive style, so you will likely really like them (or not) - I liked them.

The book image came from the Amazon site - click on the book cover image to be taken there.

First of the "The Homeplace Saga" books on Amazon

Back to the Homeplace
The first novel in "The Homeplace Saga" series of family saga historical fiction stories.
Buy Now

The images from both books come from the files of Vision to Action Publishing.

"Back to the Homeplace" by William Leverne Smith

A book from Vision to Action Publishing

This is a family saga about a family in crisis in 1987 in the southern Missouri Ozarks. The mother of four siblings has passed away, and now the two brothers and two sisters must wait to see what is in her unusual video will defining how the homeplace farmland will be distributed. The younger folks in the family are still seeking love and acceptance. I wrote the book but I have also read the book. It has received good reviews, as seen in the blog reference - click on the image of the book cover.

A book from Vision to Action Publising

This Homeplace book is set in 1996 as Christopher is settling in as a small town lawyer in the Ogden Law Firm and Jennifer arrives back in Oak Springs to set up her veterinary clinic. More family history is explored as a subplot related to the farm that has been in the extended family for over 150 years in the southern Missouri Ozarks. I wrote the book but I have also read it. It turns out to be two romances in one family saga book. Check it out for yourself, in print or Kindle editions.

Christmas at the Homeplace
The latest novel in "The Homeplace Saga" series of stories.
Buy Now

Books by Janet Dailey - this is the latest

Janet Dailey, based in Branson, Missouri, has written hundreds of easy-to-read books in several genre. Her latest is "Brannon Brothers: Trust" a mystery. I have read a few hundred of her books in the past and would recommend any of them. Take your pick! ;-)

Click on this image of the book from Amazon, to be taken to Amazon.com to this book.

Leigh Michaels is an Iowa-based writer that I have read for years. I have used the Amazon photo of her latest book, but feel confident it, or her other books which I have read, would be enjoyed just as much. Have you read her books? Give them a try.

Thank you for awarding this lens the Purple Star! ;-)