Cats, books and mysteries are a natural combination. And you heard this straight from the cat's mouth. I am Star Noir, the most beautiful cat on Hummingbird Hill and I'd like to tell you about some of my lady's favorite fiction books. These lovely little mystery series all feature the most pleasing of the 4-legged ones, my species.... the cat. All are just purr-fect for curling up with my lady on a cold winter night to share a light mystery and a warm lap. Your person might enjoy them, too.

My lady, the librarian, says that books are gr-r-reat gifts for Christmas, birthday or any holiday. She likes to make book gift bags for her special friends and family. Wouldn't the cat and mystery lover on your list be surprised to receive a gift basket containing a series of books (or a gift card), a cat mug, some tea or coffee plus a pretty personalized pillow for the feline member of the family, all in an attractive, reusable cloth feline design book bag?

Once my lady and I read one book in a series, we usually want to read them all. Some of her favorite meow-valous mystery series are the works of Lilian Jackson Braun (The Cat Who... books), Miranda James (A Cat in the Stacks Mystery), Sophie Kelly (A Magical Cat Mystery) and Leann Sweeney (A Cat's in Trouble Mystery). When she reads these books (or on the little Kindle computer machine), she stays in one spot for a long time so I can snuggle up next to her for good scratches or long naps.

from the desk of Star Noir, Felis catus

Why are cats so good at solving murders? Well, my little mouse, you must know that cats are curious and we are forever sticking our noses into dark cubbies and crevices. We are adept at solving the mystery of the lost toothbrush or the misplaced mouse. A feline often turns up the clue that solves the mystery. Cat detectives are the cat's meow!

The Cat Who books

As you can see, I enjoy the Cat Who books of Ms. Lilian Braun. I especially like the antics of that bold and brassy Siamese fellow, KoKo and the demure little, Yum Yum. James Quillerin isn't bad for a human. He's such a down to earth guy, that it's hard to believe he's a multimillionaire. Moose County has never been the same since this crime solving trio moved there.

In my opinion, the earlier books in the Cat Who series are the most entertaining. But when you realize that Lilian Jackson Braun was still writing books in her nineties, you begin to understand why.

Here is a list of the whole "marr-velous" series: 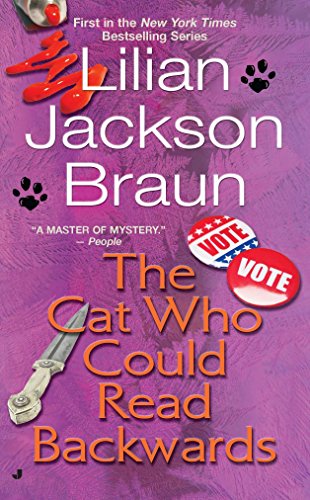 The Cat Who Could Read Backwards
This is the first book in the Cat Who series. You will meet James Quillerin, Ko-Ko and little Yum Yum, the Siamese detectives. Once you've read it, you'll want to read them all.
Buy Now

The Other Cat Who Books

Here's a video about the regal Siamese kin of Ko-Ko and Yum Yum, the stars of the series.

Beautiful, personalized cloth bags are available on several of the print-on-demand sites. A colorful cloth bag can be used as a gift bag, then later can be used again and again. Personally, Dax and I like to hide in them.

My lady designed a few featuring me (the lovely, long-haired beauty with the white star on her chest) and some of the other members of my tribe. You can add text to any of these or upload your own picture.

Cat in the Stacks Mystery

Book 1: Murder Past Due 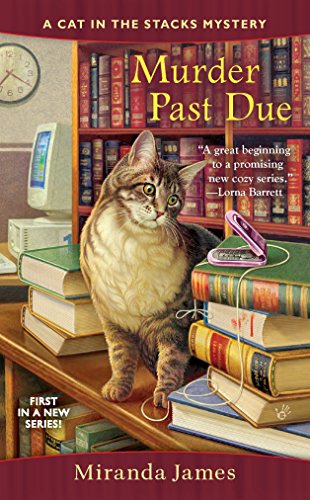 Murder Past Due (Cat in the Stacks Mystery)
My lady loves this handsome Maine Coon and I wouldn't mind rubbing paws with him either. This series has the best of both worlds - cats and librarian crime solvers. She enjoys these books quite a bit.
Buy Now

Murder Past Due - Book 1 of Cat in the Stacks Mysteries

Murder Past Due is the first of the Cat in the Stacks series by Miranda James. The cat in question is a very large (and handsome) male named Diesel. He has a purr that sounds like a diesel truck, vroom-vroom. Mr. Charlie, a male librarian, found him when he was scrawny kitten in the public library parking lot. Diesel turned out to be the largest cat (and only Maine Coon) in Athena, Mississippi. He helps Charlie solve murders in this small southern town. In Murder past due, the victim is a hometown hero (sort of) and an author of violent murder mysteries.

Other Cat in the Stacks Mysteries

Here are the other books of the series. They come on that Kindle machine, too.

Some people have said that they think I am a Maine Coon Cat. I think I am, because I am a big girl with long hair, little ear tufts and padded feet. I also have a lovely high pitched little voice.

Cat Mugs Are a Must for Tea While Reading

Sometimes my lady, Naturegirl7, likes a cup of tea when she reads a good mystery book. She has mugs with pictures of us on them. A mug and a collection of tea or coffee are great additions to a gift bag. 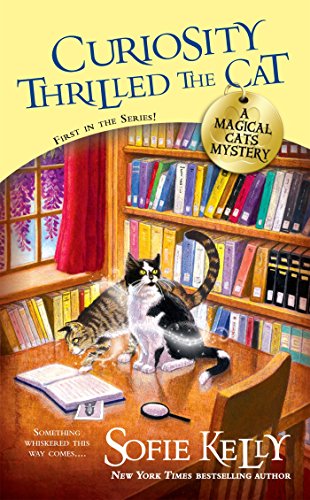 Curiosity Thrilled the Cat (Magical Cats)
You'll love all of the mysteries in this series. My lady eagerly awaits each new offering. This is another with the cat and librarian combination. I wish I could walk through walls!
Buy Now

Sofie Kelly aka young adult writer and mixed-media artist, Darlene Ryan, is the author of the Magical Cats Mysteries. Now there's no cat more special than moi, Black Star, but the kitties in this mystery series, Hercules and Owen, take special to the next level. All while giving their human companion and librarian, Kathleen Paulson, helpful clues to solve the murders. Hercules and Owen are some funny and mischievous cats. They seem to appear and disappear at will, so Kathleen has decided that they are magical.

Here's a complete list of the Magical Cat Mystery Series:

Book 1 The Cat, The Quilt and the Corpse

The Cat, the Quilt and the Corpse - Book 1 - Cats in Trouble Mysteries

Merlot is a red tabby Maine coon cat who is the Ninja protector of the group. Syrah is a sorrel Abyssinian (with chocolate ticking). He's Jillian's quiet and smart top cat. Chablis is a sable point Himalayan who is allergic to humans. She always wants to be in Jillian's lap. 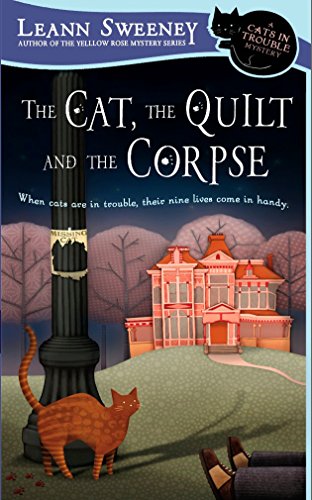 My lady loves to make quilts and she loves those of the feline persuasion, too. If you know someone like her, then he/she would like to read more of the Cats in Trouble series.

Here's a delightful video about the Himalayan breed for your enjoyment.

Fluffy Pillows for Humans and Cats

I don't know about you, but I enjoy a soft pillow for my naps. My lady also likes to put one behind her head when she reads. A pretty one with a cat picture on the front would be a nice addition to the cat mystery book gift bag.

Curl Up With a Good Book!

Here are some more good mystery series, that the cat lover on your list may enjoy.

Dax is the only male cat in our tribe. He can be a bother, but I keep him in line. He also enjoys a good book, though his tastes are more... shall we say, juvenile.