Books on Maori History and Culture

The Maori are commonly thought to be the indigenous inhabitants of New Zealand. They are Polynesian settlers originating from, what is assumed, Tahiti and the Cook Islands who landed approximately 1000 years ago on the shores of New Zealand.

After the colonization of the new homeland called Aotearoa, the land of the big white cloud, the Maori culture began to thrive.

Maori culture includes a highly developed respect for ancestors and nature. Many Maori myths and historic tales represent spirituality, gods and guardians, and the creation of the earth and mankind. Many Maori art forms reflect these values and beliefs.

Maori art is, and has been since the beginning of Maori culture, an all-embracing part of life.

"The spiritual dimension of Maori art is still strongly felt...art treasures of the Maori are not only objects of beauty but of great spiritual power."

Maori pa are fortified villages or gardens placed on raised, terraced grounds.The pa were surrounded by earth walls, and wicker panels, topped with stakes. These strongholds were very efficient and have played a major role in skirmishes between the Maori and the British army.

More on the Maori pa on Wikipedia. Courtesy photo by Ingolfson | Wikimedia Commons

Whakairo is the Maori art of carving. The Maori are renowned for their wood, stone, bone, and jade (greenstone) carving skills. Many of the typical Maori carving designs originate from earlier Polynesian cultures. An example is the well known tiki (human figure) which is also known in Hawaii and other Polynesian countries.

Maori carvings are emblematic for the Maori view on the world and spirituality. Some popular and recurring elements in the designs are the spiral shape (koru), human-like figures, certain specific patterns such as the kowhaiwhai, and mythological beings.

Book on Maori Myths and Legends

In general myths seek to answer the primal questions of what it is to be human. To describe the world we live in as well as a more broad notion of metaphysics . Especially the Maori creation myth is still popular today.

"Myths are set in the remote past and their content often has to do with the supernatural. They present Māori ideas about the creation of the universe and the origins of gods and of people. The mythology accounts for natural phenomena, the weather, the stars and the moon, the fish of the sea, the birds of the forest, and the forests themselves." Source: Wikipedia article on Maori mythology.

This is a collection of tales and myths remembered from her childhood. The maori legends are richly told and beautifully, and sometimes frightenly, illustrated. The Kanawa remains faithfull to the vivid storytelling ancestry she represents. Many of the heroes and villains are as real as the shadow in the night...the shadow that refuses to go away. 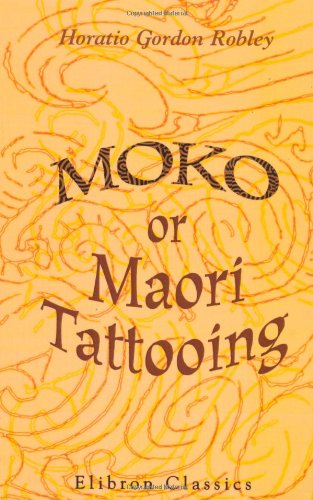 Moko; or, Maori Tattooing: With 180 Illustrations from Drawings by Author and from Photographs by Horatio Gordon Robley (2005-11-30)
Written by Horatio Gordon Robley. About Maori tattooing and in particular facial tattoos (moko) and how these tattooed faces communicate the bearer's genealogy, tribal affiliation, and spirituality.
Buy Now

Today Maori tattoos enjoy great popularity. Not always is the cultural and historical significance clear to those who are in favor of getting a Maori tattoo. As a curiosity the tattooed faces (moko) speak to the imagination of many.

Before Europeans set foot on New Zealand's shores, most highly regarded Maori wore moko's. Maori of lower social status were not allowed to wear moko. Receiving moko constituted an important milestone between childhood and adulthood, and was accompanied by many rites.

A person wearing a moko was perceived attractive. Men generally received moko on the face, on their buttocks (rape rape) and on their thighs (called puhoro). Women usually wore moko on their lips (kauae) and chin.

Since 1990 there's a renewed interest in Maori tattoos.

The application of Maori moko distinguishes itself from modern tattooing because it is done by scratching and scraping the ink into the skin instead of stabbing in the skin. Therefore skin tattooed Maori style has grooves and isn't smooth.

Horatio Gordon Robley was a soldier, artist and collector of preserved tattooed Maori heads (mokomai) and antiquities. Robley has documented lots of info and has written several books on Maori culture and in particular on Maori tattoos.

Your Favorite Aspect of Maori Culture and History?

Which part of Maori history and culture is the most appealing to you?

The annual Maori book awards were organized by the University Kaihautu Maori. "Books on Mäori topics published between June last year and May 30 were selected as finalists in four categories: art, architecture and design; biography; history; and the reo Mäori."