Rachel Thomas is an avid reader and runs a book club in her town. Read her reviews to find suggestions of books you might love to try.

Whilst Dinner At the Homesick Restaurant is a novel about the minutiae of ordinary family life, there is not a moment of the book that is not utterly compelling. The story of a family with three children whom the father abandons, this novel recounts the characters' attempts to cope with this loss.

The mother, rather than being portrayed as the hero of the novel, is shown as being as flawed as her husband. Her attempts to maintain some semblance of respectability and normal family life often push her to the limits of her coping abilities and at times her behavior towards her children borders on abusive.

None of the characters in the novel comes out of it well - rather, it shows them all as humans with human failings and weaknesses.

The enchanting thing about this tale of the petty jealousies and tragedies of a family, is that the characters are so familiar, yet they are at the same time utterly realistic, never lapsing into cliche. We are never quite sure with which characters Tyler's sympathies lie; they continually switch roles between hero and villain.

The best line from the novel:

"There ought to be a whole separate language, she thought, for words that are truer than other words--for perfect, absolute truth. It was the purest fact of her life: she did not understand him and she never would." pg.10

This novel is a fantastic choice for a book club because it creates such differences of opinion as different members relate to specific characters within the book, understanding their motivation, but being at a loss to understand the motivations of other characters. This encourages lively discussion amongst the members and at every book club where I've read it, it has created a legion of new Anne Tyler readers who go and seek out all of her other novels.

I am a great fan of Anne Tyler's and this book is a particular favorite of mine. The beauty of Tyler's work is that she does not have to tell of epic events in order to create an epic novel, and this is truly an epic novel. A finalist in the Pullitzer Prize for fiction, this book did not actually win despite being shortlisted, unlike her Pullitzer Prize winning novel Breathing Lessons. However had Dinner At The Homesick Restaurant won, it would have been a more than worthy winner. Anne Tyler describes Dinner At The Homesick Restaurant as her "best work".

A book that should join those few that every literate person will have to read.

Dinner At The Homesick Restaurant 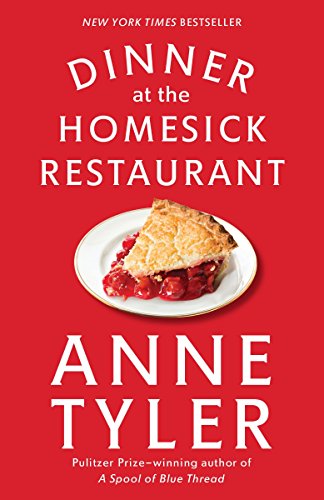 Dinner at the Homesick Restaurant: A Novel
Customer review: "What an incredible book! My first Anne Tyler and I've gone on to read them all. This book is so incredibly sad, so heartwarming, so real, so searingly honest, it literally leaves you gasping. Nick Hornby (great author) has been quoted as saying this is the book that made him want to be a writer - I can see why. This book literally tugged at my heart strings, I literally felt my heart constrict in grief and expand in joy. It's a masterpiece. Read it."
Buy Now

Anne Tyler is a modern American author, short story writer and novelist from Baltimore, Maryland. She has published twenty two novels, three of which have been nominated for the Pullitzer Prize, with one, Breathing Lessons, winning in 1985. A Spool of Blue Thread, her twentieth novel, was also nominated for the Man Booker shortlist in 2015.