A fan page on Elinor Dashwood from Jane Austen's classic 'Sense and Sensibility' novel. Containing quotations from Elinor Dashwood which reveal insights into her wonderfully kind and thoughtful character.

Elinor Dashwood is a much-loved character from the book Sense and Sensibility by Jane Austen. Here is a selection of quotes from the book which enlighten us to the character of Elinor and her relationship especially with Marianne Dashwood.

Elinor is, of course, very much the 'Sense' from 'Sense and Sensibility' but that's not to say she's cold and devoid of feeling. Because, as we discover in the novel, Elinor simply manages her emotions well and hides her true feelings so she doesn't spread unhappiness elsewhere. It turns out that perhaps Elinor is the most impassioned character of all because she cares about the feelings of others above herself.

Most certainly it is Elinor who is the 'sense' in 'Sense and Sensibility' - almost always practical, outwardly reserved and mindful of other people's feelings. She is a stark contrast in demeanour to her sister, Marianne and also her mother, Mrs Dashwood who both are highly emotional and convey more sensibility than sense.

Elinor is often teased and rebuked for her careful and guarded opinions. Early on in the book, Marianne criticizes Elinor for her seeming lack of feeling for Edward Ferrars who Elinor is in love with:

"Esteem him! Like him! Cold-hearted Elinor! Oh! worse than cold-hearted! Ashamed of being otherwise. Use those words again, and I will leave the room this moment."

The character of Elinor is utterly unselfish. She is thoughtful and always acts with complete consideration for other people - even people who do not deserve such consideration:

"For four months, Marianne, I have had all this hanging on my mind, without being at liberty to speak of it to a single creature; knowing that it would make you and my mother most unhappy."

Jane Austen for your Kindle

A complete collection of all of Jane Austen's novels including Sense and Sensibility and 13 other works. This Kindle edition is beautifully formatted and also contains an active table of contents which makes it far easier to jump to the exact book you want to read.

Elinor is guarded and cautious in voicing her opinions of Edward Ferrars who she falls in love with. Marianne mocks her when she carefully says:

"I do not attempt to deny," said she, "that I think very highly of him - that I greatly esteem, that I like him."

Although Elinor comes across as being highly reserved, she alludes to the fact that she feels more emotional internally even though this may not be apparent to other people:

"Believe them [her feelings] to be stronger than I have declared; believe them, in short, to be such as his merit, and the suspicion - the hope of his affection for me may warrant, without imprudence or folly."

Elinor loves Edward although she cares not for his family who have never shown Elinor the slightest bid of kindness. Edward's own mother was willing to cast him out of the family entirely because she did not approve of his marriage choice.

"I like Edward Ferrars very much, and shall always be glad to see him; but as to the rest of the family, it is a matter of perfect indifference to me, whether I am ever known to them or not." and "The unkindness of your own relations has made you astonished to find friendship any where."

Surprisingly, the sisterly bond between Elinor and Marianne is a very close one indeed, despite how different they are. Elinor believes Marianne to act too impulsively when it comes to Willoughby and tries to warn her that she is moving too fast:

"Well, Marianne," said Elinor, as soon as he had left them, "for ONE morning I think you have done pretty well. You have already ascertained Mr Willoughby's opinion in almost every matter of importance." and "You will soon have exhausted each favourite topic. Another meeting will suffice to explain his sentiments on picturesque beauty, and second marriages, and then you can have nothing farther to ask."

Elinor even goes so far as to discuss her worry about Marianne's lack of sense with Colonel Brandon although he doesn't share Elinor's opinion:

"There are inconveniences attending such feelings as Marianne's, which all the charms of enthusiasm and ignorance of the world cannot atone for. Her systems have all the tendency of setting propriety at nought; and a better acquaintance with the world is what I look forward to as her greatest possible advantage."

How well Elinor knows her sister. While, outwardly, most people view Marianne as the fun and lively Dashwood sister, she is only really thought to be this way because she is so spirited and impassioned on many a topic.

"I should hardly call her a lively girl - she is very earnest, very eager in all she does - sometimes talks a great deal and always with animation - but she is not often really merry." 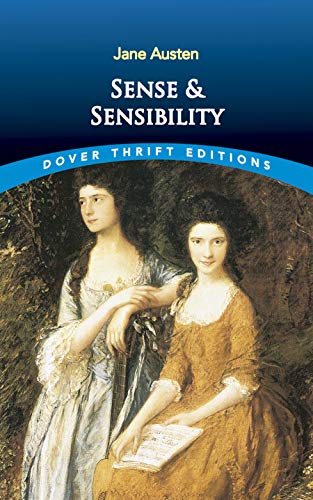 Elinor casts doubts on the character of Willoughby the moment he parts company with Marianne in such an abrupt manner. Here, Elinor speaks the words which you would expect her mother, Mrs. Dashwood to utter. But Mrs. Dashwood is too similar in her sensibilities to Marianne and it is Elinor who appears to assume many parental responsibilities:

"It is all very strange! So suddenly to be gone! It seems but the work of a moment. And last night he was with us so happy, so cheerful, so affectionate? And now, after only ten minutes notice - Gone too without intending to return!"

Willoughby is summed up very well by Elinor who really has the measure of the kind of man he is:

"The whole of his behaviour," replied Elinor, "from the beginning to the end of the affair, has been grounded on selfishness. It was selfishness which first made him sport with your affections; which afterwards, when his own were engaged, made him delay the confession of it." and "At present," continued Elinor, "he regrets what he has done. And why does he regret it? - Because he finds it has not answered towards himself. It has not made him happy. His circumstances are now unembarrassed - he suffers from no evil of that kind; and he thinks only that he has married a woman of a less amiable temper than yourself."

For someone who is normally so open, Marianne becomes very secretive regarding the true nature of her relationship with Willoughby which is of deep concern to Elinor who wishes to know whether Marianne is engaged to Willoughby or not. Mrs. Dashwood is convinced that an engagement exists purely on the basis of Marianne and Willoughby's behaviour with each other. Elinor remains doubtful:

"I confess," replied Elinor, "that every circumstance except ONE is in favour of their engagement; but that ONE is the total silence of both on the subject, and with me it almost outweighs every other."

Elinor provides words of comfort and sense after Willoughby's cruel treatment of Marianne.

"Had you married, you must have been always poor. His expensiveness is acknowledged even by himself, and his whole conduct declares that self-denial is a word hardly understood by him. His demands and your inexperience together, on a small, very small income, must have brought on distresses which would not be the LESS grievous to you."

All other images unless otherwise stated are used with permission as part of my affiliate links with Amazon or Amazon UK and Zazzle.