The Marvel Essential series contains four volumes devoted to the Ghost Rider superhero, who first appeared in 1972 in a comic book called Marvel Spotlight. He later moved to his own series, which lasted 81 issues over a decade.

The collection also includes some of the character's appearances in other comics during that time. The Marvel Essential books, each topping more than 400 pages, contain the original stories in black & white rather than color. The image to the left is from the back of Essential Ghost Rider Volume 2.

The Origin of the Ghost Rider

Never Cut a Deal With The Devil!

The Ghost Rider debuted in Marvel Spotlight No. 5 (Aug. 1972) and I still have vague memories of buying the comic at a stall in the Englishtown, New Jersey, flea market! He was part of a wave of horror-influenced characters that Marvel introduced after the industry's comics code was liberalized. His debut followed three issues of Marvel Spotlight that had featured the Werewolf by Night.

In the first Ghost Rider story, Johnny Blaze, who we are told is an orphan, is part of a stunt cycle show run by Crash Simpson, who had raised Johnny. But Crash is dying of cancer. Johnny makes a deal with the Devil, vowing to serve him for eternity if Crash is spared from the cancer. But you should never trust the devil! Crash dies in a motorcycle jump, and Johnny Blaze is cursed to become the Ghost Rider!

This collection starts out with the debut of the Ghost Rider from Marvel Spotlight No. 5, a truly great story that features the wonderful art of Mike Ploog. Ploog's work really captures the spookiness of the character in a way that I don't think any artist ever did afterwards. The other highlight to this collection is the final two issues -- a crossover adventure with Daredevil that had some early art by John Byrne. Also among the stories in this collection is the debut of the Son of Satan.

The 30 stories presented -- from about 1976 to 1980 or so -- contain a number of appearances by guest stars including Dr. Druid, Hawkeye, Two-Gun Kid, Night Rider, Dr. Strange and others. At the start of the collection the stories focus more on Ghost Rider as a superhero fighting common supervillains but by the end he is mainly fighting supernatural foes.

About half the stories were written by Michael Fleisher, who did much better work with The Spectre and Jonah Hex. The main artist for most of the issues was Don Perlin, who has always done serviceable work but nothing to get excited about. The highlight of the collection is a story called ''Death Race,'' which originally appeared in issue No. 35 of the series. This was a fill-in issue by Jim Starlin, who wrote the story and did the art layout.

The Thing, the Avengers and the Werewolf by Night!

This collection may be the weakest, as the Ghost Rider rambles from adventure to adventure, veering from spooky tales to horror to flat-out super-heroics (at one point even going to Saudi Arabia (!) to fight some bad guys). The art chores are mainly handled by Don Perlin and Jack Sparling, neither of whom will knock you out. There's loads of guest stars in the issues, including Night Rider, the Arabian Knight, Captain America, Angel, Iron Man, Tigra, the Thing, Werewolf by Night and Thor.

The highlights of the collection are short back-up story that is a tale of the Night Rider with art by Carmine Infantino, and a tale from 1992 written by Tina Chrioproces and drawn by Greg Larocque. The Chrioproces story, which appeared in Marvel Super-Heroes Fall 1992, is supposed to have taken place just before Ghost Rider No. 80 -- An odd choice to include in this collection, which only goes up to No. 65.

The collection contains the best stories of the Johnny Blaze version of the Ghost Rider since his early appearances in Marvel Spotlight. The stories really pick up under writers J.M. DeMatteis and Roger Stern. They each handle a few stories, then DeMatteis writes the concluding eight issues of the original series.

With DeMatteis The Ghost Rider is finally under the control of a writer who understands the character and has an idea of where the series should head. The eight-issue arc culminates in a great epic struggle between Johnny Blaze and the demon that possesses him, culminating in a dramatic change in their relationship.

The added Spider-Man issue doesn't have the Ghost Rider in it, and isn't really very interesting. Johnny Blaze makes an appearance in the two New Defenders stories but they are more an epilogue to the Ghost Rider series than anything else.

Which Ghost Rider is the best? - Johnny Blaze vs. Danny Ketch

Several years after Johnny Blaze was freed from the demon that caused the Ghost Rider (as told in issue 81 of his series), Marvel Comics introduced a new Ghost Rider in the form of Danny Ketch in 1990. Danny, it was revealed, was Johnny Blaze's long-lost brother. The characters have partnered at times to fight evil.

Which is the Ghost Rider you prefer, and why?

The Ghost Rider was a 2007 movie starring Nicolas Cage that generally got poor reviews. Even so, Hollywood has scheduled a sequel that is due out in 2012. If you are interested in seeing the movie, it is offered fairly regularly on eBay. Good luck if you decide to bid on an auction!

A great value for the price!

The Marvel Essential series reprints many of Marvel Comics' stories from the 1960s on in large volumes that usually top more than 500 pages. The series began in 1997 with the publication of the Essential X-Men No. 1 and The Essential Spider-Man No. 1. Many of the books have been printed more than once, with different covers on some of them.

The huge advantage to these volumes is cost: a reader can get 30 or more stories for about what a half dozen new comic books cost, and the old stories have more pages of action per issue. The Essentials books are much more cost-effective than buying all the original comics as well.

Some think the Essential series is a great way for fans to read all the adventures of their favorite series without having to scout down the old comics and spend a great deal of money. Others say the books just aren't worthwhile because the stories are reprinted in black & white and losing the original colors of the art makes everything look drab. I agree the colors are a major part of enjoying a comic, but I do think the Essentials books are a great deal. I no longer have to go through my collection and pull the original comics out of their protective bags to enjoy the stories. Now, they can sit in a handy volume on my bookcase for me to tip into whenever I want!

Ghost Rider And The Champions! - A Mid-1970s Experiment Gone Wrong!

As mentioned above, there were various times in the 1970s when Marvel decided to play up Ghost Rider as more of a superhero than a supernatural character, and so in 1975 the comic company decided that he should be part of a superhero team.

He was a founding member of the Champions, an odd series that last only 17 issues (plus some stories elsewhere). I say odd because the comic brought together five superheroes who were second-tier at best (former X-Men Angel and Iceman, Hercules, Black Widow and the Ghost Rider) and placed them out in Los Angeles. They never really jelled as a team, and I remember numerous times during the run the characters themselves were wondering why they were together as a team.

The stories were enjoyable though, and the series had some great early John Byrne art. All the stories featuring the team were collected in two Marvel Essential volumes, so if you want to really complete your collection of 1970s' Ghost Rider appearances, that would be a great way to do it! 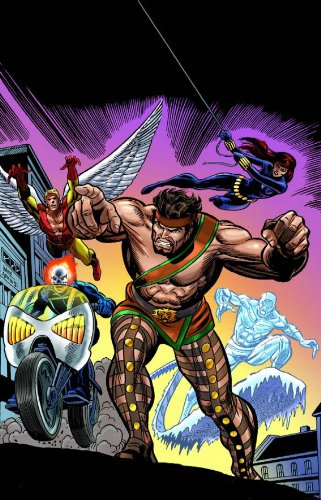 If you are a fan of comic books then you should visit Geppi's Entertainment Museum in Baltimore. Founded by Stephen Geppi, president and chief executive officer of Diamond Comics Distributors, this place has one of the best comic-book collections on display anywhere! I wrote a separate lens on Geppi's that provides more details on the museum. Please check it out!

Geppi
Geppi's Entertainment Museum is located in Baltimore and is dedicated to all sorts of American pop culture: comic books, television, radio, movies, magazines and much more.

Hundreds of Thousands of Fans in One Place!

My son and I were able to attend the New York Comic Convention in October, 2011, and wrote a review of our day there. It was a blast, and we highly recommend a visit to the convention next year for any true comic book fan!

To find out more about who we are and what we write about please see here:

The Ghost Rider of the 1970s was never a major character in the Marvel Universe, but some of his tales were fun and he has outlived a lot of contemporaries that have faded with time. What are your thoughts on the character, the Marvel Essentials books, this lens or anything else? This is your spot to speak up!