Flying with the Dalai Lama's Cat

David Michie has been writing Buddhist books for years but I became a fan when I read The Dalai Lama's Cat.

A Good Read for a Long Haul Flight

I am a frequent flyer between London and Vancouver and one thing I can guarantee as a nervous flyer is that I won't sleep on the flight. That is where a good book comes in and one of the very best was The Dalai Lama's Cat which rescued my sanity on the flight last year. Remembering how I easily frightened myself at 37000 feet with The DaVinci Code then many months later I was weirded out by The Lovely Bones, I looked in the bookstore at Heathrow. So many books, so many promotions.... Eventually I decided to take advantage of an offer and buy two.

Now the first choice was 50 Shades of Grey simply because I wanted to know what all the fuss was about, but then I spotted this beautiful cover "The Dalai Lama's Cat". Now I have to say, had I only been allowed one book, 50 Shades of Gray would have gone back on the shelf. Once a cat gets her claws in me, there is no putting it back, but I was allowed two, so I bought them both. Besides which, I live with a Buddhist who also worships cats, so what choice did I have? Now you might guess that 50 Shades was first on my reading list? Wrong! It would wait. There was a cat story to be had. I started in the departure lounge because I had a long wait and by the time we landed in Vancouver I had read from cover to cover.

I don't want to spoil the story by giving away too much, except to say that this is a delightful tale about a very sweet little Himalayan cat who is rescued from almost certain death by the Dalai Lama. The terrified kitten is brought back to the monastery where she becomes a cherished member of the household. During the course of her adventures, we discover much about compassion as the Dalai Lama's Cat reveals her new Buddhist insights from a kitty's point of view. It has some surprises along the way too....

Now having read this charming book on the plane, I insisted my friend in Canada should read it and she loved it too, then bringing back to England for Colin to enjoy. So discovering David Michie's book is part of a series has me planning to restock my slowly depleting bookshelves. The only question is, do I wait until I next fly to Vancouver....

The best book ever? 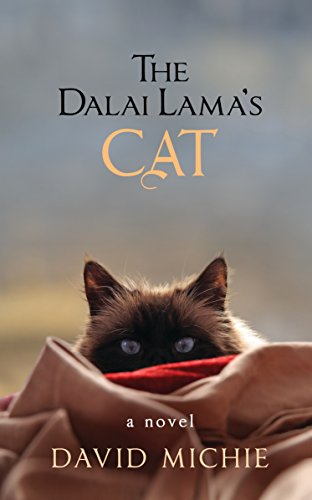 The Dalai Lama's Cat
Obviously as a cat lover it was that gorgeous image that pulled me in. Then there was the intriguing title. I really had no idea how good this book really would be but once in I couldn't stop reading it. Obviously it has a Buddhist message but the story is so compelling and full of purr-sonality.
Buy Now

Hurry Up and Meditate: Your Starter Kit for Inner Peace and Better Health

Writer David Michie has a way of explaining the ideas of Buddhism and meditation in such a commonsense way. He has a great sense of humour and he knows how to reach his audience with charming and simple writing. The Dalai Lama's Cat is one such example, but he has written several other texts on meditation and Buddhist ideas that might be deemed "straight". So if you are not necessarily a "cat person" (which I personally find weird) you can still benefit from his writing.... Nevetheless, HHC Rinpoche wins out every time for me.

Hurry Up and Meditate: Your Starter Kit for Inner Peace and Better Health is a good book for those less animal-orientated - who prefer their Buddhism straight if you like. Those who stand to gain most from meditation are often those who steer clear of it, saying they don't have the time, or they can't sit still and silence the thoughts that keep running through their minds. David Michie's book is written to help people realise that you can make meditation a part of a busy lifestyle and reap the benefits from it.

Buddhism for Busy People: Finding Happiness in an Uncertain World

It is so easy in such a busy world to put our own inner peace and well being on the back burner while we chase success and material things. These things are transitory though, and the very things we neglect to achieve them are the things that truly bring happiness. In Buddhism for Busy People: Finding Happiness in an Uncertain World David Michie shares his own story and how he found his new purpose with humour and it is a delight to read.

The Art of Purring

I now have The Art of Purring in my collection too and I am very much looking forward to reading it having enjoyed The Dalai Lama's Cat so much. More later...

The Dalai Lama's Cat and the Art of Purring
I so wanted to read this book. here HHC (His Holiness' Cat) goes on her own personal journey to discover the cause of purring. The kind of purring that comes straight from the heart! She has many hair-raising adventures along the way too!
Buy Now

Here David Michie dexcribes how he got the idea for the Dalai Lama's Cat and how she got her voice from his own Princess Wasik....

A really lovely review of the book that tells you some of the story - hopefully enough to whet your appetite and read this gorgeous book!

Do you think we have much to learn from animals?