For Your Reading Pleasure: Wyrd Sisters

What could be better than a Shakespearean-like dramedy as interpreted by, say, Monty Python together with the Marx Brothers, Charlie Chaplin, and Laurel and Hardy? It's the Wyrd Sisters!

Wyrd Sisters is a hilarious tale of three witches (Bubble, bubble, toil and...oh, rats what was that?) who embark on a quest to save a kingdom from the inept and deadly rule of its murderous king and his sadistic, ambitious wife.

Welcome to Discworld, a flat planet whose evolution has taken it about as far as Earth's Middle Ages by the time of the story. One of Discworld's kingdom's, Lancre (pronounced oddly like some skin lesion), has recently lost its king - murdered by Duke Felmet (with the help of the Duchess). Following the murder, Felmet also tries to secure his succession by killing the king's infant son - but fortunately, the child was spirited away by loyal guards and deposited with the eponymous three witches for safekeeping.

Why Felmet wanted the kingdom of Lancre in the first place is a mystery - he hates it. And his subjects know it and want a new king.

In the meantime, the Wyrd Sisters have adopted out the prince, Tomjon, to a troop of actors to ensure that Felmet can't find him. But once the needs of the kingdom are known, they set out on a quest to find the heir apparent and get him ready to rule. Since only three years have passed since the king's murder, this is no easy task.

Confused? Well, don't be. This is just the beginning of a side-splitting thrill ride of misconceptions, missed opportunities, and mismatched heroes as Discworld and its denizens mimic the machinations of MacBeth, sprinkled liberally with a touch of Hamlet and a banana-peel twist. 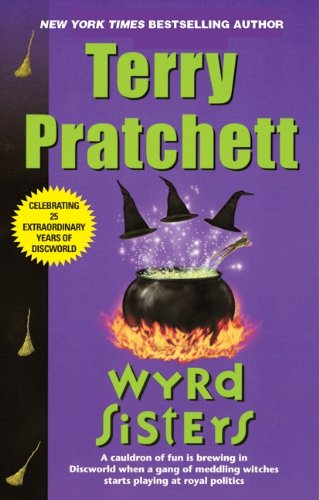 "The night was as black as the inside of a cat. It was the kind of night, you could believe, on which gods moved men as though they were pawns on the chessboard of fate."

And for the visual among us...