Andrea Wulf provides a distinctive view of the founding of our nation focusing on the first four United States Presidents and their roles as farmers and nature lovers at the same time as they were providing leadership to the founding of the USA.

Approaching this book as a bit of a skeptic, I quickly became a fan and supportor of the concepts presented. I will expand on these feelings and observations as we move through this lens together.

The Intro photo is of Mount Vernon as seen from the Potomac River including gardens and groves: http://en.wikipedia.org/wiki/File:MTVernonseenfrom... 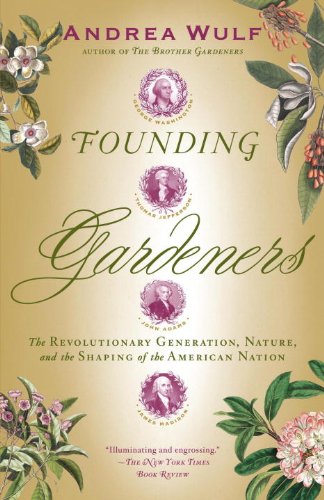 Founding Gardeners
This book is sub-titled: "The Revolutionary Generation, Nature, and the Shaping of the American Nation." This is very accurate in that Wulf demonstrates how each of the Founders she highlights, Washington, Adams, Jefferson, Madison, and to a lesser extent, Benjamin Franklin relied heavily on their interest in nature and being 'farmers' in their actions and decision-making during the founding of our nation. Her stories of their constant search for better seeds and methods of agriculture before, during and after their political 'careers' are especially compelling. This was highlighted by her documentation of how James Madison may well have been the first 'national environmentalist.'
Buy Now

From the book: "Mount Vernon was his private statement of independence and republican simplicity, wrought from the soil and trees of his country."

Did you know? - Leave a comment of what you really thought! Thanks!

Did you realize each of the first four USA Presidents was a farmer/planter?

John Adams' farm was his base throughout his long life

I really enjoyed the portion of the book devoted to the tour Adams and Jefferson took of English gardens while the awaited negotiations with the English early in the history of our nation. In their later years, when Adams and Jefferson resumed their earlier friendship after years of political separation they resumed discussions that included reflecting back on the garden tour of England, many years earlier. In his later years, Adams was especially interested in how various types of manure could be used as fertilizer to improve the soil on his farm.

Thomas Jefferson was a very hands-on designer of these gardens

Thomas Jefferson sought and traded seeds and other natural species throughout his life, whether on the European Continent or in the colonies or the United States. He sent Lewis and Clark west on their expedition with clear instructions to send back all manner of natural specimen - which they did in abundance. Jefferson shared this bounty widely as well as insuring that many of the flora and fauna from the expedition found their way to Monticello.

Dr. Bill's Book Bazaar Blog - Books I have read and am reading

Each Monday around the time I start reading a new book, I record it in a "It's Monday: What are you Reading?" post - next Monday will be # 38 of this series. The blog also has reviews, promotion items for my books, occasional giveaways, and other typical 'book blog' items. Stop by, follow, and enjoy reading... or totally ignore, as you wish! ;-)

In May 1818, Madison gave a seminal speech: 'Address to the Agricultural Society of Albemarle' which was reprinted across the country. Madison spoke of what we today call our 'fragile ecological system.' He was speaking specifically to the clearing of forests and the management of the natural resources we now recognize as finite... not unlimited as was assumed in his day by most people.

I enjoyed writing about Montpelier. I honestly hadn't paid that much attention to Madison... the book really changed that point of view. His speeches and actions, later in life, demonstrate he was, what we call today, an 'environmentalist' - amazing! ;-)

Which President would you like to read more about?

Which of the 4 first USA Presidents would you like to learn more about?