The book is set in Bisbee, Arizona

I read every Joanna Brady Mystery by J.A. Jance as soon as I can get my hands on it. This one was no exception, and I am very pleased that was the case again, this time. A special twist was that as the date of release of the book approached, Jance put out a related Novella, The Old Blue Line, which I obtained on my Kindle. It was a nice mystery story about the current husband of Joanna a few years before they married. Actually, the end of the book is when and how they met. I was a clever way to add this "interestin" back-story information without taking up space in a regular novel in the series. The eBook also included the Preface and Chapter One of the new novel, "Remains of Innocence," which was really good marketing, in itself.

The twist in the "Remains of Innocence" this time is that a murder in Massachusetts and one in Bisbee, Arizona, occur at about the same time. We get both strories, rolling along, simultaneously. The Bisbee murder involved both the city police and the county sheriff. A second murder occurs that again involves both departments. We get a fine look at both the cooperation, and the inherent tensions, that accompany this stretching of the personnel of both departments. These organizational things are especially intriguing, to me.

As things begin to come together, it doesn't seem possible that what seems to be happening is about to happen. Know the feeling? Well, I'm not about to spoil the stories. The commonalities, the differences, and the possibly involvement of a mob-boss on trial in Massachusetts make some particularly curious possibilities. Oh, and the Federal government gets involved, as well, just for added, dare I say, comic relief? Not really comic, but you'll understand when you get there... Jance is so good at some of these perspectives. Another good one!! ;-) 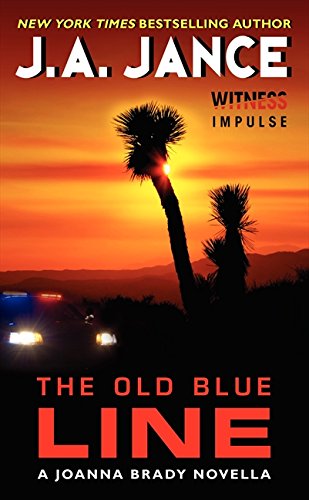 The Old Blue Line: A Joanna Brady Novella
This is the book I read first, about Joanna's husband.
Buy Now

Panoramic view of Bisbee, Arizona in 2009

"Back to the Homeplace" is the first novel in "The Homeplace Saga" series of family saga historical fiction stories. It introduces characters and a setting much like Jance has done with Joanna Brady and Bisbee.

Back to the Homeplace
This is my novel that I would like you to read. Thank you.
Buy Now

The mystery novella in "The Homeplace Saga" Series of stories

Murder by the Homeplace
This is my mystery novella. It takes place immediately following Back to the Homeplace. Can you guess who was murdered?
Buy Now

Learn more about "The Homeplace Saga"