Ms. Venegas believes reading is essential for understanding the rapidly changing world. She enjoys sharing books with others.

A Biography About John Wilkes Booth

American Brutus, John Wilkes Booth and the Lincoln Conspiracies by Michael W. Kauffman published in 2004 is an intriguing biography and reads almost like a modern crime novel. Not overly weighted down with detailed language, the book held my interest through 400 pages of compelling history.

Booth very much believed Lincoln was the direct cause of the thousands of deaths the Civil War was producing. He also faulted the President for the fallen image the South would now suffer with the loss of the 4 year engagement. His stance and opinions on the issue alarmed his family and friends.

The initial plot was to kidnap the President, but as Booth conspired and lied to co-conspirators he gained sole control of the events that would follow.

I had not read a book of the last days of Lincoln before this read. What I knew was from articles, TV and history book chapters. This book is interesting and exciting to read.

The author used his own studies, deep interest and visits to most related sites to analyze what Wilkes' attitudes were, and the attitudes of the era, as well. It was interesting to discover, that if you had no income in mid-19th century, you probably did not own a gun or even a horse.

Have you read a book or books about the Lincoln assassination?

Mr. Kauffman made Booth the central focus of this work. The author has read much of the material available about the assassination and researched Booth and his family. He has visited all the key locations.

The author is a detective in his analysis of documents and events and it is easy to know Booth and all the players when the reading was finished. It would be interesting to know what scholars think of Mr Kauffman's researched answers.

Mr. Kauffman believed John Wilkes Booth was a gifted actor acting out or writing a plot of a lifetime. Too bad it was totally real and he likely changed the course of the Country's reconstruction and the lives of much of the populous.

The Booth family members were very close and cared about each other. The immediate family was very concerned about the views John developed against the Union cause, and this prompted strife between the brothers. There may have been jealousy on John's part toward Edwin's financial and acting success.

This photo shows John on the left, Edwin and Junius Jr. on stage for Julius Caesar.

16 pages of Historic Photos in the Book

Pictures of John Wilkes Booth, his family and co-conspirators are included in the book.

Two maps and images of Washington, DC and places of events are interesting and bring focus to the narrative.

The last chapters of the book is dedicated to the conviction of the individuals accused of Abraham Lincoln's death, their situations in prison and the possible error of convicting the players in military court.

Seven points of interest new to my knowledge that made the book very engrossing. 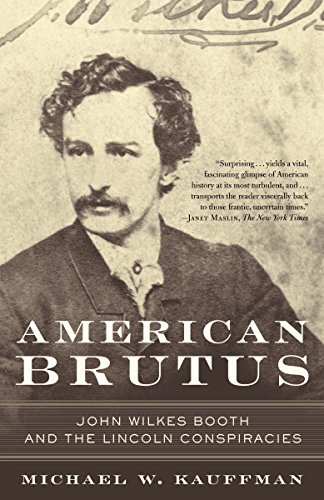 American Brutus: John Wilkes Booth and the Lincoln Conspiracies
The author Michael Kauffman believes he has uncovered keys attitudes and habits of John Wilkes Booth that explains his drive to see a plan through, even changing its course, when his chosen cohorts start to change their commitment.
Buy Now

All Ages Will Find This an Interesting Read

I read my son's copy of the book.

History lovers will like this easy to read book, "American Brutus: John Wilkes Booth and the Lincoln Conspiracies". The book compels and is easily read in a few days. My opinion after finishing is that John W. Booth was a conniving, double crossing manipulator, who went out of his way to make the murder look like a well run conspiracy, instead of two or three crazies deciding to shot the President of the United States.

The author's details of everyday life draws the reader to the era: facts on how horses and carriages had to be rented and even firearms procured. An actor of a famous family did not have these items in his possession. One helper of the events was caught as the middle sleeper in a double bed occupied by three men, because he did not have his own housing arrangements.

Will you be reading American Brutus?