Visions of an Author's Imagination

While the books of J.R.R. Tolkien have been read by millions, few readers realize that JRRT was also an amateur artist.

Readers of The Lord of the Rings have seen Tolkien's line drawing of the "Speak Friend and Enter" inscription on the Moria Gate (that's artist John Howe's reconstruction of it for the films). Some versions of The Hobbit or The Lord of the Rings include Tolkien's hand-drawn cover art. And of course, Tolkien drew the maps of Middle-earth.

There's much more. Tolkien was a watercolor artist with a vivid, almost psychedelic style, creating dreamlike images of Middle-earth and other products of his imagination.

So where can you find Tolkien's art? It's scattered across several books. Here's a list.

(Note: A handful of Tolkien's illustrations, including his only detailed portrait of Bilbo, are found under the first "View Gallery" link in an io9 article covering "The Middle Earth Illustrators Tolkien Loved - and the Ones He Abhored.")

J.R.R. Tolkien: Artist & Illustrator is a stunning book, one I've read cover to cover or thumbed through many times.

It includes most of the same images as Christopher Tolkien's 1992 Pictures by J.R.R. Tolkien, however, Artist & Illustrator contains 200 illustrations compared to Pictures' 47.

Now out of print, you'll pay a bit of a premium for Artist & Illustrator, but it's worth it. There's plenty of glimpses of Middle-earth, not only Tolkien's sketches and illustrations for The Lord of the Rings and The Hobbit, but also rare drawings and watercolors for The Silmarillion (including heraldic crests of the Elves), illustrations of other stories (including all the paintings in Roverandom, elaborate doodles, and landscapes of his own beloved England.)

If you love JRR Tolkien and the worlds he created, I recommend putting this at the top of your gift wish list with lots of stars. 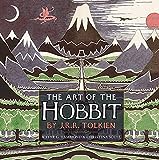 The Art Of The Hobbit By J.r.r. Tolkien
Buy Now

Art of the Hobbit

The Art of the Hobbit is a great present for die-hard Tolkien fanatics and avid Hobbit fans inspired by the upcoming films.

This is a slightly slimmer volume than Artist & Illustrator, with 100 pictures. It includes many new drawings, maps, cover art, and early versions of Elvish and dwarf-runes. There is a lot of repetition: early sketches followed by finished ink drawings or watercolors. There are more glimpses of the Shire, and a few precious portraits of Gandalf, Bilbo, Smaug, and some unnamed Dwarves. (No Elves, sorry, but great illustrations of Rivendell, Lake-town and the entrance to the Elvenking's halls.)

There's not really that many major new images that haven't been glimpsed in some fashion before, but I just received my copy about half an hour ago, and I'm happy to own it! Hammond & Scull's commentary once again gives us glimpses of Tolkien's life and creative process found nowhere else.

As an alternative, many of the best watercolors and pictures are available in

The Annotated Hobbit, which also includes the original, first edition Gollum chapter which Tolkien altered significantly to make it agree with The Lord of the Rings, or

The Hobbit: Enhanced Kindle Edition, which includes both Tolkien's illustrations and a few recordings of his reading passages from the book.

Letters from Father Christmasis a wonderful collection of Tolkien's facsimile letters from Santa Claus to his own children, answering their letters and including sketches and notes about life at the North Pole. Each postcard includes a hand-painted "North Pole" stamp. His kids must have been utterly enchanted by this incredible yearly correspondence with St. Nick.

These are delightful, and would be so if Tolkien had never become known for anything else besides Old English scholarship.

View this on Amazon and click the "Look inside" link to see samples!

Mr. Bliss is an eccentric, humorous children's book that reminds me of a cross between Lewis Carroll, Mr. Toad's wild ride, and Edward Gorey.

There's a lot of nonsense, a lot of mishaps with an early motor-car, the three bears, and Tolkien's most whimsical style of writing (which you may remember from some passages of The Hobbit) and drawing.

Mr. Bliss is fun, silly, and not meant to be taken seriously.