"Lions of the West" - A Summer Reading Recommendation

Nine biographies of the westward expansion by Robert Morgan

It took both heroes and villains for the westward movement of the United States to succeed in the first half of the 19th century. Morgan has woven this set of nine biographies, some familiar, some not, into an intricate pattern that tells the story of the westward expansion in an easy to read format while further educating us on how it actually took place - and who played the key roles. I highly recommend this book for your summer reading.

In this lens, I have provided very brief information on each of the nine men featured in the biographies by Morgan. My intent is to whet your appetite to read the book. How did I do? ;-)

The image is courtesy of the main page at Amazon - see the Amazon Spotlight Personal Review immediately below for the link.

Lions of the West by Robert Morgan provides a set of nine biographies woven together to tell the story of the westward expansion of the United States in the first half of the 19th century. Some are names you will readily recognize. Others you may be reading about for the first time.

Lions of the West
We each should understand how this thing some call "Manifest Destiny" took place. It did not just happen. It took men (and women) of great courage, personal tenacity, and unwavering belief in what they were doing - often against the wishes of those in command or supposed in charge. This is a great summer reading book.
Buy Now

Thomas Jefferson was the third President of the United States. He was an American Founding Father and author of the Declaration of Independence. When he was elected president in 1800, he oversaw a peaceful transition of power, then proceeded to purchase the vast Louisiana Territory and send the Lewis and Clark Expedition across the continent.

Andrew Jackson was the seventh President of the United States. Based in frontier Tennessee, Jackson was a politician and soldier. He defeated the Creek Indians in the Battle of Horseshoe Bend and the British in the Battle of New Orleans. He was known as "Old Hickory" because of this toughness and aggressive personality.

David "Davy" Crockett was a 19th century American folk hero, frontiersman, soldier and politician. He represented Tennessee in the U.S. House of Representatives, served in the Texas Revolution, and died in the Battle of the Alamo.

Samuel "Sam" Houston was an American statesman, politician and soldier. He is best known for his leading role in bringing Texas in the United States. He was elected as Governor of Tennessee as a Jacksonian. Houston is the only person in U.S. history to have serves as governor of two different states. He was the 7th Governor of Texas.

James Knox Polk was the 11th President of the United States. Polk has been called the "least known consequential president" of the United States. He set an agenda entering his four years in office and accomplished it. He had promised to only serve one term, and did that. He died of cholera three months after leaving office.

Winfield Scott was an American Army general. He served as Commanding General of the United States Army for twenty years, longer than any other holder of the office. He was a hero of the Mexican War and served as military governor of Mexico City. He was an unsuccessful presidential candidate of the Whig Party in 1852.

Kit Carson was an American frontiersman and Indian fighter. Born in rural present-day Missouri, he left home at age 16. He became a mountain man and trapper in the west. He explored the west to California and north through the Rocky Mountains. He lived among and married into the Arapahoe and Cheyenne tribes. He was hired by John Fremont as a guide. 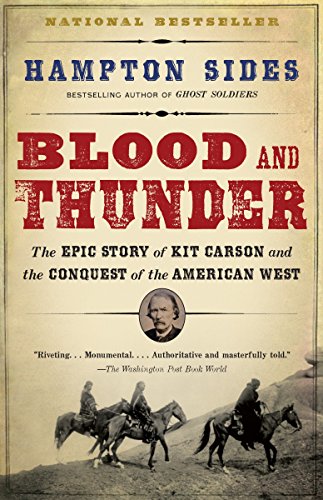 Blood and Thunder: The Epic Story of Kit Carson and the Conquest of the American West
Learn more about Kit Carson by reading this stirring set of stories.
Buy Now

Nicholas Trist was an American Diplomat. He was married to the grand-daughter of Thomas Jefferson. At one time he served as private secretary to Andrew Jackson. He served as U.S. Consul in Havana, Cuba. During the Mexican War, President Polk sent Trist to negotiate with the Government of Mexico.

Poll of the biographies

Which of the nine are you most anxious to know more about?