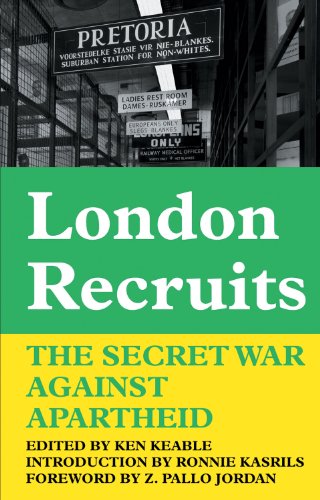 London Recruits: The Secret War Against Apartheid went on general release in 2012. It is a collection of short accounts by heroic people who played a vital role in the South African liberation movement.

An amazing collection of real life stories about young men and women’s bravery.

This book is important to me on a very personal level because my husband, Graeme Whyte wrote one of the stories.

After the Rivonia trial in 1963 – 64 and Nelson Mandela’s imprisonment, young white volunteers went into South Africa on secret missions for the banned ANC. These London recruits were able to move around freely simply because they where white, and took huge personal risks to help end that vicious regime of racial oppression.

They were recruited by Ronnie Kasrils who had escaped capture when they arrested Nelson Mandela and others, by hiding under the floorboards. He fled to London where he worked under-cover.

For security reasons, and their own safety, these men and women had to keep their acts of bravery a secret for over 40 years! Now they are free to tell their incredible stories and London Recruits: The Secret War Against Apartheid is on sale widely. They recently toured the book in South Africa where they were hailed as heroes, and appeared on national TV.

Great News -They're Making a Film!

We are very excited to announce that a film about the London Recruits is being made now. The film makers have been very busy filming on location and have been extremely successful at fundraising for the film. It is due to be ready in 2020.

Here's a homemade video of my husband, Graeme, talking about his story and showing his suitcase. He was being filmed by his nephew who was hearing all this for the first time!

I am very proud that my husband was one of the recruits. He went to South Africa in 1971 when he was only 20 years old. His mission was to go to Durban with a false-bottomed suitcase containing leaflets and firework-type explosive devices. He stayed in a hotel and constructed leaflet bombs. Then, at a predetermined day and time, he detonated 6 of them in the black areas of Durban throwing thousands of leaflets into the air. Other recruits did the same in all the big cities on the same day at the same time.

The response was tremendous! Black people pounced on the leaflets and the police could not stop them grabbing them and taking them out to the townships.

The leaflets spoke of hope, and their purpose was to keep the struggle alive. They spread the word that South Africa’s black people had not been abandoned, the ANC (African National Congress) was alive and fighting, and that the struggle would continue. It called on them to remember Nelson Mandela and their other imprisoned leaders and keep positive even in the face of such bitter repression. These acts of defiance helped changed the course of South Africa’s history!

London Recruits: The Secret War Against Apartheid is an amazing read – it is gripping because it looks retrospectively at who the recruits were and why they were so willing to risk life and limb for people of another country. They gained nothing personally, and were sworn to secrecy for a staggering 40 years! My husband’s father was never told and his mother was 85 when she read his story.

I highly recommend this book for two reasons, it is a fascinating read about recent history, and all proceeds go to the Nelson Mandela’s Children Fund.

Thanks very much for reading my review.

Graeme is saying goodbye to his suitcase. It was taken back to South Africa and put in the Lilliesleaf Museum, Rivonia, which was the secret headquarters of the ANC and the place where Nelson Mandela was arrested.

Here is Ronnie Kasrils talking about how he operated and recruited the London Recruits.

Click Here to visit our website where you can learn more about the stories of the London Recruits.