With two of her own, Denise remarried and brought two children from her husband together to explore what it means to be a blended family. 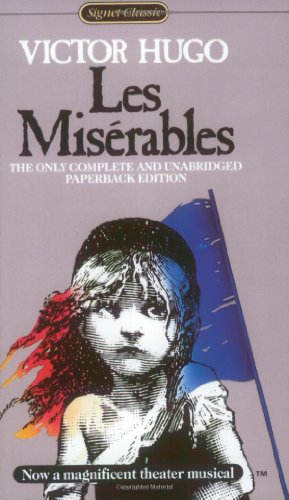 This is the musical version and sung with some stage acting. I have this DVD and love it so much. The music is phenomenal and the actors are stellar. I love this one better than the recent full length musical movie because the movie gets a little too graphic for me.

There is a reason this book has been made into several movies and an epic musical, not to mention the theme being stolen for such TV series and The Fugitive and others. It is because it is a story with everything. There is mystery, heartbreak, romance, disaster, hope, faith, courage, the chase, soul-searching, justice and injustice. Even after seeing all the movie versions and the musical (which I love), I have to say the book is the best. There are places where it is a bit wordy (how dare those writers bog us down with all those WORDS) but I think Victor Hugo had a way of reaching right into the soul and expressing what people most fear and desire. He breaks it down to our most basic needs, beyond food and water, the need to be needed; to do good for someone somewhere.

Changed for the better.

The story opens with Jean Valjean sentenced to 5 years in jail for stealing a loaf of bread for his starving sister and her children. He never again finds them or even finds out what became of them. Sad. His problems get worse when he decides to escape and after being recaptured another 5 years is added to his sentence. In year 8 he escapes again and is free for only one day before being recaptured and having another 5 years added to his sentence. After all his attempts to escape he ends up serving 19 years in prison for stealing one loaf (actually one mouth full) of bread. But his misfortunes only continue when he is released because now he has a record and is treated with fear and contempt everywhere he goes. It is no wonder he has a very bad attitude toward people. Then he meets the priest. This is the most important part of the whole book. Through his kindness to Jean Valjean, the priest shows him that he is loved by God and that he matters. The priest even forgives him when Jean Valjean steals from him. This changes everything. Everything that follows is because that one priest showed love to a lost and hopeless man.

Beautifully done and sung. I still like the Dream Cast version above best.

This is the part of the story that most impresses me and humbles me. It makes me want to be a better person. You never know what one act of kindness on your part will lead to. Each person helped by Jean Valjean was helped because of that priest who changed him and bought his soul for God. The ripples go out and touch hundreds of people. As a matter of fact, there is no knowing how far reaching one act of kindness can go. It is mind boggling. And the reverse could be true as well. Who knows how far reaching one act of selfishness and anger can effect others around us? It makes me humbled and careful to be at my best all the time.

You must read this book. You will never be the same. It will change you and make you too want to be a better person.

You may think a book set in the 1600’s of France would have no relevance to life today, but that’s where you would be wrong. I look around and see some of the same misery and poverty around me today. Sure, people are not being thrown into prison for stealing a mouthful of bread, but many are homeless, sleeping under bridges and in cardboard boxes, stealing and begging for food, with no visible means of getting out of this vortex of despair. Even those with a place to live are struggling to get by and pay their bills and raise their children with the pitiful minimum wage jobs. Even with the health care blessings, there are those trying to exploit the system and those trying to rob from even the poorest of the poor. Is this really that different from the France of Jean Val Jean? Yet, like his situation, there is hope for those who turn to the light and strive to be better people, to look to the good in people and help one another. Perhaps we need more Jean Val Jean’s in the world.

Did you like the Musical Version of Les Miserables recently released?

As a step mom and sometimes an unappreciated parent, the last few chapters of Les Miserables really resonated with me. I felt very much like Jean Val Jean whose whole world had been about Cosette and raising her to be a good, well-rounded, well-adjusted woman, only to be neglected and forgotten by her. His heartbreak nearly killed me as I read it with tears of empathy and self depreciation running down my face. I felt that so deeply that my husband was afraid for me, walking in on me while reading one day.

Like Jean Val Jean, stepparents must think only of the welfare of the children and not of themselves. In the end the children will never know the sacrifices we made for them or the heartache we felt because of slights by them while growing up. Gratefully, my daughter recently wrote me a long heartfelt letter apologizing for the things she believes she put me through while she was growing up. She is now going though her own blended family experiences and had no idea it would hurt this much. Eventually, your children find out how much they put you through but by then you have grandchildren to love on.