Love as Thou Wilt

I left to run, I came to read.

Once upon a time, as they say, there was a girl not much older than what would be considered an 'adult', barely approaching the descent (ascent?) from a teenager to, well, not a child any longer.  I was she in a world where I had run to in order to escape the harsh realities of my surroundings.  That is to say I ran from Santa Cruz, California to Klamath Falls, Oregon to live with my brother so that I could escape my personal use of methamphetamines and the death they were leading me to, but that is an entirely different story.

Oh, reader, you could only imagine!  How afraid and alone I was in this new place.  No job and no friends and having to retrieve whatever was left of myself from inside my painful guts.  I cried day and night over the loneliness and despair (made horrible by the addiction I was letting go of) until my friend came to pay me a visit.  When he did he brought with him a book that he insisted I should read - you know, to pass the time and distract my thoughts.

It was called "Kushiel's Dart" and all I can tell you is that I thought it silly and preposterous even that someone might so much as suggest a book with its crinkled pages and half-naked girl on the glossy front would ever distract my aching insides for even a moment.  At this point in time I had nothing else.

My boyfriend drew this for me

Inspired by the Kushiel Trilogy, this sketch was drawn by tattoo artist Ross Grajewski (for Gina Blanchard) All Rights Reserved.

Jacqueline Carey you saucy woman, if you only knew how your words wrenched me free from a nauseatingly downward spiral!

I am so eager to tell you about the texts I read that telling you about the Sorceress of Words (aka author) herself can wait just another moment.

From when my arms were strong enough to a book I have always been an avid reader. Remember the scene in "The Neverending Story" where Bastian finds his spot, curls up under his blanket and gets his apple ready to read his book? I was like that, yet I never thought to take on a favorite author. That would have been as easy as choosing a favorite star or the best piece of chocolate I have ever tasted (I live by a world famous chocolate shop, to be fair.). Before this woman's books I wouldn't even consider it, but from the first page I was torn asunder from my very footing; I could scarcely live my life outside of her words, wanting nothing more than to read just one more. Just one more. Just one more and I'll go get a job, go to school, clean the house.......

Beginning to end I clutched tight to our heroines hand in the series alongside Jacqueline's pen. I ran through their adventures in Terre D'Ange and beyond with the stunning and magnificent people that stumbled in and out of all of our lives. Mere hours beforehand I had been doubled over on a mattress concentrating on my woes and physical pains and here I'd come to be spilling tears over Phedre and so many others!

Cursed by her very name, the child in the stories was born into the hands of naivete and too flawed for the intentions of such a land as Terre D'Ange. The Night Court hustled and bustled with the beautiful creatures brought hence by Naamah, each adept trained unlike the last until the pools of pleasures were complete in their lands. Each person served a purpose and each pleased passerby and neighbor as needed, yet one held a difference among the lot of them that stood as her greatest wall.

The imagery that Carey is able to portray is lush and wrought with fine details, from who is wearing what to the taint of color on ones lips to the surrounding bricks and earth (there's also a map!).

I would tell you, reader, of ships and songs and royalty. I could tell you of love and pains and servitude; battles and tribes and bloodshed. Of leaps of absolute faith, unending knowledge and tear-stained pages questioning loyalties, but I desire not to ruin it any further. Teach yourself of the lands and the travels of blessed Elua and his Companions if you do so dare.

Come to know the Court of the Night Blooming Flowers. 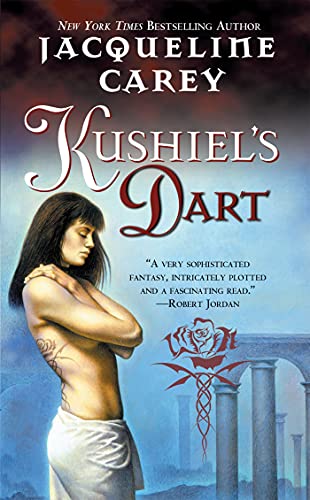 Kushiel's Dart
"When Love cast me out, it was Cruelty who took pity upon me" - Sex, secrets, seduction....Travel ye who will to an ethereal land of elegant creatures but beware the dangers and heed who you may trust.
Buy Now

The Impact & The Author

I was not the only one who was strongly impacted by the stories Jacqueline weaved. Since the inception of the novel many individuals have gotten tattoos of the infamous marque that crawled up Phedre's back. There are hundreds of fan art pages generated by any search engine or several on the authors official page (as found on this Lens). Many have even begged a movie and swore to encourage hundreds to see it but there have been no serious inquiries much to the dismay of myself and many other readers.

My personal heroine Jacqueline Carey celebrated a B.A. in psycholoy and English Literature from Lake Forest College. For her Kushiel series she has won six different awards (2001 Locus Best First, 2001 Romantic Times Best Fantasy, Barnes and Noble Top Ten 2001, Amazon Top Ten 2001, Borders Top Ten 2002 and Amazon Top Ten 2003). It wasn't until High School that she took up creative writing and it took her near a decade to produce what she did in that beginning. Some things she enjoys (as I've learned from following her social network) are gardening, talking dirty, researching scenes, baking and yoga.

As much as I like to talk about Phedre No Delaunay I have read not only her three books but the three books that followed involving Imriel. It is the continuation of the Naamah series and as you can see by the list on this Lens there are many of those! I did not make it past the sixth in the series because no matter how much I loved and adored the stories they did not contain Phedre and I must admit I fell deeply in love with her.

I fared three stories without her, but Jacqueline Carey bore her into my heart and I could not leave her for the future. 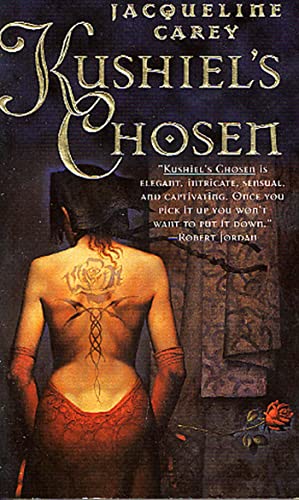 Kushiel's Chosen: A Novel (Kushiel's Legacy)
"Let the warriors clamor after gods of blood and thunder; love is hard, harder than steel and thrice as cruel. " For Phedre the games of the courts could never truly be finished. Not she, chosen as she was.
Buy Now

Though she has written many stories, these are the novels written by Carey.

There was also a book called "Earth Begotten" about Elua and his Companions that I would love to get my hands on. In fact, if any person knows how to get one of those fifty copies....

Anyway, here are the others in reading order (I read the first six so far): 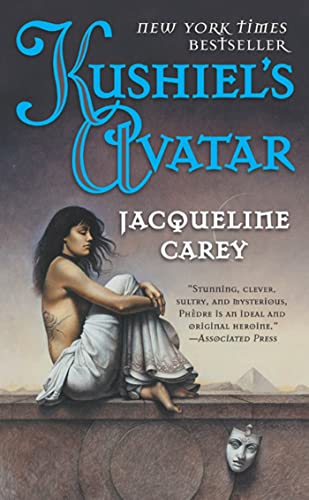 Kushiel's Avatar (Kushiel's Legacy)
"We speak of stories ending, when in truth it is we who end. The stories go on and on." Meet Khebbel-im-Akkadd and the Mahrkagir. Know the darkest places in all of the lands. Admittedly this was the most difficult to read. It's very vivid and... very harsh.
Buy Now

Jacqueline does it again as she so often did - and likely still does today if I continued to follow.

Tales of tribes and bears and magic and lore and war spring forth. Of a hero and his anxieties his hearts desires and his debts to his family acquired even before he was born. While these stories wove wonderful memories they were beyond Phedre's time.

There are no books on this Lens listed as a link that I did not read myself.

I recommend *all* of them.

Have you read any of her books?

Have you read any books by Jacqueline Carey?