Miffy the Bunny is a famous little cartoon bunny that was born in the Netherlands in 1955. Miffy the Bunny's adventures have traveled all over the world and is one of the most famous cartoon bunny ever. Miffy is cute and well loved by children as well as parents who are looking for nice, cute books for the young ones. When I was a kid in the 70's I did have one Miffy book (in french), and now I read Miffy to my own kids. Please meet Miffy the Bunny.

Who is Miffy the Bunny

Dutch writer and painter Dick Bruna used to draw for his son cartoon stories about a cute little white bunny. This is how the first Miffy the Bunny book was born in 1955.

Miffy was originally called Nijntje (from "konijntje" which means little bunny), but over the years the children books have been translated into so many languages that her name got translated. "Nijntje" obviously was not a good name if you did not speak Dutch.

Miffy the Bunny in other Languages

The First Ever Miffy Book 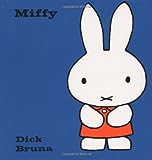 Miffy
This is the original, first ever, Miffy book. First published in 1955. Mr. and Mrs. Bunny want a baby and their wish is about to come true. 24 pages. A classic of children's literature. Lovely!
Buy Now 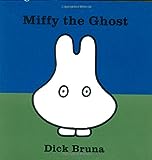 Miffy the Ghost
This is a favorite of us! Miffy wants to dress as a ghost. See how her mother help her out and what happens when Miffy's friends found out who the ghost is!
Buy Now

The drawings of Miffy might seem simple to many but to me they bring back fond memories of childhood and bedtime stories. Miffy's adventures are timeless.

I remember my Miffy book even if I was just a little girl. Too bad it got lost eventually.. Seeing how Miffy is popular, I was probably not the only little kids with her books.

My interest in Miffy has spiked again 4 years ago when I had my son. I wanted good bedtime books for him. And now with her little sister, we can share Miffy stories all together. Too bad my old books were gone. I've always prefer old to new.

There are over 30 storybooks about Miffy and in all of them she appeals to small children because of her positive attitude and fun adventures she keeps experiencing. It is very easy for children to relate to her and make them feel safe.

Dick Bruna was able to talk about many different "grown up" subjects like grief and death in a way that children could easily understand and relate to, showing pictures of Miffy in different environments and situations.

I think that Miffy appeals to so many small children because of the simplicity in the drawings and the adventures that are so recognizable for many children. And like i said before, Dick Bruna really has a way of talking about "big issues" in a way that children can easily understand. His books are always made up of 12 pages, each with a single drawing and 4 lines of text in verse.

This buildup proves to be successful and it is easy for parents to read a short story before bringing their children to bed, but the little books also offer the opportunity to talk about things in a nice and easy way.

While writing this page and doing some research on Miffy I was wondering how kids nowadays feel about Miffy, especially since there are a zillion "more exciting" toys and books around.

Apparently the Miffy franchise is well and alive with hundreds of derivative products and a large fan base. So popular that tributes (not to say obvious rip off) were made..... like Hello Kitty.

Did You Know Miffy The Bunny Before Reading This Page?