I've always been a keen reader and have so many books that I couldn't hope to read them all in my lifetime. I love being surrounded by them

This book is about a poet, Ka, who is also an investigative journalist. He is stranded in a snowbound small town for an eventful few days to learn about the mysterious suicides of young women who have been obliged under the laws of Secular Turkey to remove their veils. The book is poetic, dreamy, atmospheric, exciting, political, and very informative about the ideological cross-currents in modern Turkey.

I was captivated right from the start by the sheer poetry and competence of the writing, which shone through the brilliant translation by Maureen Feely. I thought Snow was actually quite a difficult book, but Maureen Freeley's translation was so sensitive and seamless that it was sometimes hard to remember that it wasn't originally written in English. The words never jarred, and the poetic descriptions were all there

There is a love story interwoven with a tale of political unrest, and an exploration of the contrasting attitudes of secular society in Turkey and Muslim fundamentalists, culminating in violent action.

The viewpoints of the characters are revealed sympathetically and non-judgmentally, giving an insight into the problems of the warring factions in modern Turkey, which, under the auspices of Ataturk, became a secular state in the 1920s.

This book has become a 21st Century Classic:

It is 1992. Ka, a poet and political exile, returns to Turkey as a journalist, assigned to write an investigative piece about troubling events in the small and mysterious city of Kars near the Armenian border, where he becomes stranded for a few days due to a heavy fall of snow ("kah" in Turkish). Note the symbolic Turkish wordplay on the name - Ka - the man, Kars - the place, and kah - the snow-.

Through Ka, we consider the position of modern Turkey, a strongly secular state set up by Ataturk in the 1920s, and the opposing views of Muslim traditionalists and young Muslim fundamentalist Turks. Some of the women take up the veil for the first time, and there is a series of mysterious suicides by young women prohibited by the secular laws of Turkey from wearing the veil in public. We learn the views of Blue, a fundamentalist freedom fighter or terrorist, depending on your point of view. Pamuk writes with non-judgmental compassion for all the characters, which enables the reader to have some understanding of the complex issues and ideals which trouble Turkey in its seemingly impossible struggle to reconcile the different factions.

The thread of a developing love story runs through the revolutionary events taking place, and for Westerners it gives great insight into what it is like to live in modern Turkey and their difficult relationship with the Kurds.

'Snow' angered Islamists and westernised Turks alike when it came out in Turkey in early 2002 - but, as ever, this fanned the flames of curiosity, improving sales which quickly rose to more than 100,000 copies. It evokes the spiritual fragility of the non-western world, its ambivalence about the godless West, and its fury.

Orhan Pamuk's work has been translated into more than fifty languages. He is the recipient of numerous national and international literary awards and was awarded the Nobel Prize in Literature on October 12, 2006

"How much can we ever know about the love and pain in another heart?

How much can we hope to understand those who have suffered deeper anguish, greater deprivation, and more crushing disappointments than we ourselves have known?"

Snow by Orhan Pamuk - Buy it on Amazon - If you want to see what all the fuss is about, just read it - you'll be blown away!

I cannot recommend this world-acclaimed book highly enough - I thoroughly enjoyed it, revelling in the rich prose and quality writing. It is already a modern European classic.

I was not surprised to find a few less positive reviews, as the book 'Snow' would not appeal to everyone; but if you are interested in serious political and philosphical or religious issues, you'll love it. 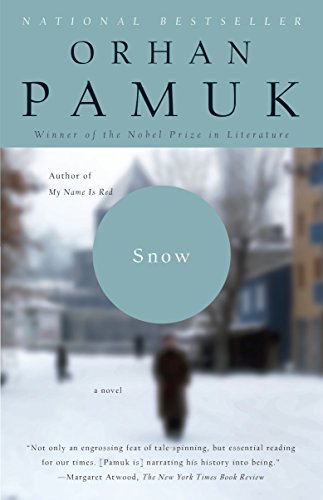 Snow
This is an unusual book about a subject which is much-debated throughout the world - how far should the state go to separate religion from government and public life. It is debated through a fictional character, caught up in a love affair and violent insurgency
Buy Now

* A Signed 1st Edition of Snow

* An Unsigned 1st Edition of Snow

I am also selling:

I am selling: A Signed 1st Edition of Snow - First Edition, First Printing - Published 2004 by Faber

I am also selling an Unsigned 1st Edition of Snow

Paper back Mint condition, with dustjacket

Have a bit of fun!

"My Name is Red" by Orhan Pamuk - Orhan Pamuk's Previous Book - you can get your copy here: 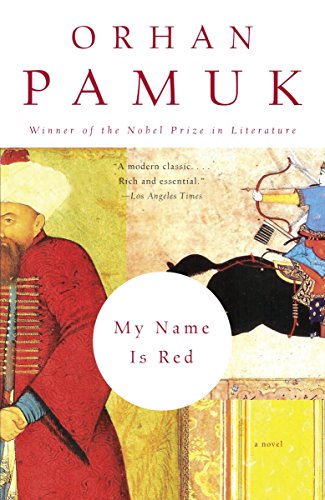 My Name Is Red
Translated by Erdag Goknar, this is another book by world renowned author Orhan Pamuk, whose books have been translated into 54 different languages
Buy Now

More About the publication of Snow by Orhan Pamuk

This is Orhan Pamuk's fifth book, and won him the Nobel Prize for Literature. It is destined to become a 21st Century classic and has been published world-wide in many different languages.

The first English edition (translated by Maureen Freely) was published by Faber & Faber in 2004 to enormous critical and popular acclaim as a paperback original.

A scarce hardcover edition was subsequently issued and there is also an American Edition.

Pamuk's books are censored and often banned in his native Turkey, a culture which has to strike a delicate balance between radical Islam and Western secularism.

Orhan Pamuk's official site - By his Turkish Publishers Iletisim Publishing - Includes a detailed biography, interviews, and a list of his numerous honours

Born in Istanbul in 1952, he became one of Turkey's most prominent novellists and was made a cause celebre in 2005 when he was prosecuted for claiming publicly that the mass killings of Armenians from 1915 were a result of genocide. In 2006 Pamuk won the Nobel Prize for Literature and he is one of the greatest living writers.

Raised in a Western-oriented family, he was educated in Istanbul, graduating in journalism in1977. He published his first novel in 1982 and achieved international fame with The White Castle (1985), set in 17th-century Istanbul. He lived in the United States in the late 1980s. His works, often autobiographical and intricately plotted, probe the tensions between East and West. His later novels include My Name Is Red (1998), Snow (2002), and Masumiyet MÃzesi (2008). In 2005 the Turkish government generated international controversy when it put Pamuk on trial for "denigrating Turkishness."

More Links to items about the Turkish situation

One writer's view of the book Snow

Reading "Snow" led me to want to discover more about Turkey and Ataturk, who was mentioned in the book; I researched and then wrote the following article about

Orhan Pamuk stands up for Freedom of Speech

In an interview with a Swiss publication in February 2005, Orhan Pamuk referred to the mass killings of a million Armenians and thirty thousand Kurds in the Ottoman Empire, adding that almost nobody else dared to speak out. As a result, he was subjected to a hate campaign in Turkey and had to flee the country. Rallies were held to burn his books

In June 2005, Turkey introduced a new Penal Code, under which Article 301 stated that any Turkish citizen who explicitly insults the Republic or Turkish Grand National Assembly shall be liable to imprisonment of between six months to three years. At the instigation of an ultra-nationalist lawyer, Orhan Pamuk was retroactively charged with violating this law four months before its enactment.

He returned to Turkey later in the year to face the criminal charges brought against him.

Talking to BBC News, he said that he wanted to defend freedom of speech, which was Turkey's only hope for coming to terms with its history, and that what happened to the Ottoman Armenians in 1915 was a taboo subject, hidden from the Turkish nation who need to be able to talk about the past. he confirmed his views again at an award ceremony in Germany.

The charges against Pamuk caused an international outcry and Turkey's proposed entry into the European Union was brought into question. The European Parliament announced that it would send a delegation of five MEPs to observe the trial and the view was that the this case would be a "litmus test" of Turkey's commitment to the EU's membership criteria.

On 1 December, Amnesty International released a statement calling for Article 301 to be repealed and for Pamuk and six other people awaiting trial under the act to be freed. PEN American Center also denounced the charges against Pamuk with the words: "PEN finds it extraordinary that a state that has ratified both the United Nations International Covenant on Civil and Political Rights, and the European Convention on Human Rights, both of which see freedom of expression as central, should have a Penal Code that includes a clause that is so clearly contrary to these very same principles."

On 29 December 2005, Turkish state prosecutors dropped the charge that Pamuk had insulted Turkey's armed forces, but the charge of "insulting Turkishness" remained.

On 22 January 2006, in a week when the EU was scheduled to begin a review of the Turkish justice system, the remaining charge was dropped, ostensibly for technical reasons. Some EU representatives expressed disappointment that the justice ministry had rejected the prosecution on a technicality rather than on principle.

Pamuk has subsequently stated in an interview on BBC Hard Talk that his intent was to draw attention to freedom of expression issues rather than to the massacre.

Here's my Guestbook, Where You Can Leave Comments - Have you Read Snow? Has This Web Page Encouraged You to Do So? What are your thoughts and feelings after rea