I discovered the writings of Peter Jenkins when I found a used, 25-cent copy of A Walk Across America in a sidewalk book bin. Given my own penchant for wanderlust, the title alone drew me in. And that turned out to be a very well-spent quarter.

I'm glad the first book by Jenkins I stumbled upon was the first he'd written. From there, I eagerly gobbled up several more of his writings in the order they were published.

Over the years, I've enjoyed every moment spent vicariously traveling with the author.

While I know Mr. Jenkins only through his written words, I was thrilled to receive a personal reply to a letter I sent him. I'd share that letter here ... if only it hadn't been lost in a flash flood along with many of my other keepsakes. But the following Peter Jenkins books were spared, to be read again another day.

If you too enjoy a good travel-adventure story now and then but haven't heard of Peter Jenkins, take a look at the following list of books. I've included the Amazon links here, but many of these books can be found at your local library.

Have You Read Anything by Peter Jenkins? - A Visitor Poll

If you have, tell us which book and what you thought of it in the poll comments section at the bottom of this page.

Armchair Travel At Its Best

See The World From Home With Peter Jenkins

While author and father of six, Peter Jenkins, loves to be home on his farm in middle Tennessee, his work and second love is exploring the world and the people in it, and sharing his adventures with fans of travel-writing like me. If I can't be out on the road or trail myself, I want to be reading about it.

National Geographic took interest in Peter Jenkins' journey across the U.S. when he and his dog stopped at their offices in Washington D.C. as they walked through. The company even outfitted him with photography gear, and the adventure was featured twice in the magazine, once in April, 1977, and again in August, 1979.

Learn more about Peter Jenkins, read excerpts from his books, view photos of his farm, family and travels, and find out what else this wonderful travel-writer is up to on PeterJenkins.com.

The First Half Of A Very Long Journey

From New York to New Orleans

In 1973, just after graduating from Alfred University with a Fine Arts degree, a disillusioned young man named Peter Jenkins set off from New York with his dog, Cooper, to walk across the United States. Along with seeing the country, Peter wanted to meet and experience people along the way, so he mostly kept to the roads instead of backcountry trails, stopping now and then for extended periods when the spirit moved him (or the weather or finances demanded a break). This is the first of two books about Jenkins' eventful, five-year journey.

A Walk Across America
Jenkins' first journey, like those that followed, was much more than a very long walk with a lot of camping and lodging and sightseeing along the way. In addition to the thousands of miles that passed beneath his feet, he made connections with many of the people he met by chance, stopping to work odd jobs and even living on an intentional community. "A Walk Across America" is far from a "walked here, camped there, ate this" story, like some I've read. This book spent three months on the NY Times Bestseller List for good reason. It's also required reading at hundreds of colleges across the country.
Buy Now

And Then There Was Barbara

From New Orleans to Oregon

This is the second half of Jenkins' cross-country walk, and now he's not alone, accompanied by his new wife, Barbara, who wrote portions of this book. The night I finished the first book, I went out and bought this one, which I read straight through. Loved it!

Follow Peter Jenkins To The Other Side of the World

Across China is both the story of the first American ascent of Mt.Everest from the Tibetan side and an account of the author's travels, along with an interpreter, through some of China and Inner Mongolia's most remote and least understood places. 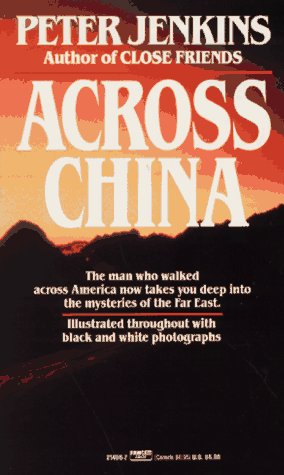 Across China
This book received some mixed reviews on Amazon, but I agree with the five-star ratings. "Across China" went as high as #3 on The New York Times best sellers list.
Buy Now

Jump On A Boat With Peter Jenkins

And Travel Along The Edge Of America

Imagine setting off on a 1600-mile, solo ocean journey along the Gulf Coast from the Florida Keys to the Rio Grande, having never before operated a boat. That's just what Peter Jenkins did at the ripe young age of 40. During this two-year journey, he meets a fascinating cast of characters and sees places few of us ever will.

Along the Edge of America
While this is much more of a planned trip than Jenkins' walk across America, his stories about the people he meets and places he experiences are just as fresh and well-written.
Buy Now

Take A Vicarious Journey to the Northland

Enjoy another action-packed, vicarious adventure as Peter Jenkins and his family spend 18 months in Alaska. The stories are filled with humor and sometimes suspense. Read excerpts here.

Looking for Alaska
A lot happens over the course of the more than 20,000 miles Jenkins travels in Alaska, which is one reason this book has been a bestseller since it was published in 2001.
Buy Now

Meet The Animals Peter Has Loved and Lost

This book is definitely different than the others, but if you're an animal-lover, I know you'd love this book too. Among other of his cherished pets, you'll read about Peter's half-Alaskan Malamut, Cooper, his companion in "A Walk Across America," and the pet hawk he had as a child that flew freely around his room.

Close Friends
This book is now out of print but still available from Amazon third-party sellers.
Buy Now

He reads and responds to your posts.