Murder Has No Class, by Kate Kingsbury, writing as Rebecca Kent. Review.

Review of Murder Has No Class, by Kate Kingsbury writing as Rebecca Kent

This book is great fun.

There’s a ghost of an unjustly convicted man who was hanged for allegedly murdering his own father. I'm not sure if it qualifies as a "cozy" since the convicted man was executed for shooting his own dad. Cozies aren't supposed to have blood, or guns, although that rule perhaps no longer applies strictly.

The ghost of this young man visits headmistress Meredith Llewellyn during the night, while she's trying to sleep, asking her to find the real murderer. She realizes she will be sleep-deprived until she solves the murder.

Authentic History or Not ~~ Still Entertaining

I should call it "pseudo-historical" instead of historical. I'm not sure how authentic the history is here. I can forgive that in a nice, light-hearted little mystery like this.

The amateur detective in this series, Meredith Llewellyn, is the headmistress of a girls’ school in the Cotswolds --- Bellehaven Finishing School.

Two of the maids who work at the school join with some suffragettes on a Saturday afternoon. They plan to demonstrate for women's suffrage by smashing up the local pub. When they get there, they meet with some guys from a college who were there for a dart tournament.They guys think the girls are cute, and vice versa.

From an Archival Postcard for Sale on Antiques and Teacups

Vote Up or Down, or Not at All if You Are a Woman

Nobody ever found out their original intention had been to demonstrate on behalf of women's suffrage.

All the better --- it turns out --- because they would have been in even bigger trouble for political activities.

At the end, when the culprit finally gets caught, it kind of tears your heartstrings.

Bring Back that Cozy Feeling

Perhaps you might want to read my Hub entitled, "What is a Cozy Mystery?" --- here on Hubpages --- if you haven't already.

One Hundred Years Toward Suffrage: An Overview, Compiled by Susan E. Barber 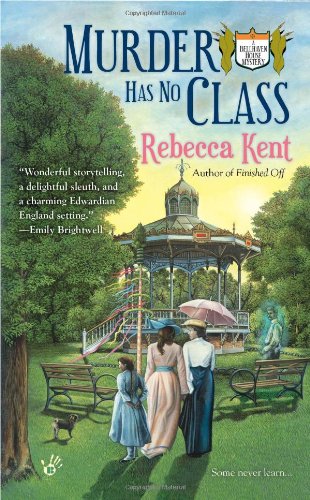 Murder Has No Class (A Bellehaven House Mystery)
This book is reviewed in the hub. I thought it was charming and suspenseful. I liked the characters. especially the headmistress --- who is the main character, and the amateur sleuth, as well as unwilling medium. This book is the third of three in the Bellehaven House Mysteries. For some reason, the author stopped writing them. She does have two other series --- Pennyfoot Hotel and Manor House. I'll have to try those. It looks like they're just as good.
Buy Now

Unfortunately, this is the last of three in this series. On the “Acknowledgements” page, the author writes: “Sadly, this is the final book in the series. I enjoyed writing about the adventures of Meredith, Felicity and Essie, and I shall miss them.”