"The Creation of the American Soul" really sets the stage of this John M. Barry biography of Roger Williams and his positions on "Church, State, and the Birth of Liberty."

Roger Williams (1603-1683) is best known to most persons as the founder of the State of Rhode Island - but his contributions to our way of the life in the USA, and the world, are much greater than that. This biography makes a fine contribution to understanding of that greater contribution. The author shares the history of conflicts in England and New England through the 1600s to demonstrate both the contributions Williams was able to make and the extreme obstacles he had to overcome, over and over, to make those contributions, notably Liberty of Conscience.

The image is of the copy of the book I just finished reading, with a plastic cover. I took the photo.

Williams founded his Plantation is spite of strong objections of Plymouth Plantation, the Massachusetts Bay Colony and other neighbors. His views stood in direct opposition to those of John Winthrop and his "City on the Hill" concept for Massachusetts Bay and of John Cotton and other leading religious leaders in New England.

Trained in Theology at Cambridge like most of his clergy contemporaries, and an extremely religious man, Williams' interpretations of the same scripture led him to very different conclusions at a time when "differences" were not tolerated. He used superior intellectual and communications skills to achieve the changes he believed were imperative in the name of Liberty.

The rest of the image in this lens are courtesy of Wikimedia Commons: http://en.wikipedia.org/wiki/Roger_Williams_%28the...

Founded by Roger Williams on differences in baptism in the scriptures

Williams founded his plantations on two controversial positions for the day: 1) Liberty of Conscience - each man should have the liberty to believe and act according to his own conscience (not be told by others, the State Church in particular, what and how to think), and 2) the absolute separation of church and state (Church and State had been inseparable in all governments in all nations of the 'civilized' world to that point in time, as well beyond, in most).

In Providence (and a little later, all of Rhode Island) persons of any faith, or no faith at all, were free to conduct themselves based on their personal thoughts (consciences) without being subject to civil prosecution from the governing state. In contrast, in Massachusetts Bay colony, the state magistrates punished persons, in civil court, for violations of religious dogma - lack of attendance at services, reading the 'wrong' Book of Prayer, failure to pay dues and fees prescribed for religious purposes, including payments to clergy, etc.

For the later years of his life, Williams was not affiliated with any particular church, but preached and served regularly based on his strong religious interests, as he interpreted the scripture.

The most famous book by Roger Williams

"The Bloudy Tenent of Persecution, for Cause of Conscience, Discussed in a Conference between Truth and Peace" in the name of his 1644 book that presented his views to the English as he returned to his Providence Plantation in New England.

Click on the image to be taken to the source, with more detailed information on the book, courtesy of Wikimedia Commons. 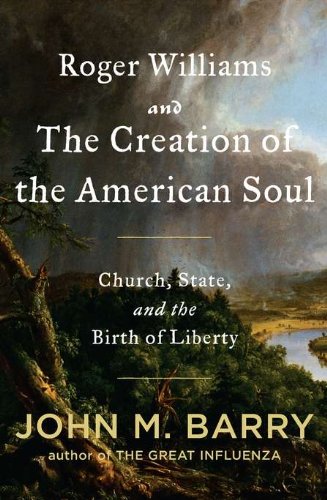 Roger Williams and the Creation of the American Soul: Church, State, and the Birth of Liberty
I highly recommend this book if you have a curiosity and interest in issues of the separation of church and state. You will be amazed at how this issue was viewed at the beginning of the 1600s and how the views of Roger Williams, as an individual, were very different from the prevailing view. Using an open mind, and training from Edward Coke and Francis Bacon in the courts of England, Williams carved out his own view of the world and convinced many influential others to adopt his views. This is an outstanding read for persons of an open mind.
Buy Now

Roger Williams served many governmental and religious positions through his 80 years of life. I encourage you to at least peruse the Wikipedia article on his (click on the image of the statue to be taken there) background and his story. It is very complicated, as explained in the book.

The article is much easier to read, but does not provide all the detail of the full biography, of course. Enjoy! He was a fascinating man.