I've just finished reading 'Rules of Honour' by Matt Hilton and thought I would share it as my recommendation for a fun summer read.

I first started reading Matt Hilton's books when I heard them compared to the Jack Reacher series by Lee Child. I'd been addicted to the Reacher books for some time, so picked up a copy and was not disappointed. 'Rules of Honour' is the 8th book in Matt Hilton's series and continues the fast paced, adrenaline-fuelled stories of his previous books.

Hilton's books focus on Joe Hunter, a former counter-terrorism soldier from Manchester, England. Now retired from the special forces, he works with his friend Jared 'Rink' Rington, a private investigator. Just like the Reacher books or an episode of The A-Team, the stories all feature Hunter stumbling across some situation and using his training and skills to solve it.

In 'Rules of Honour', Rink's father is murdered in his home and Rink is out for vengeance. His mother witnessed the crime, but due to the Japanese tradition of 'Giri' (a kind of moral obligation), she won't tell Rink and Hunter all that she knows. However, as more murders occur, each one linked to Rink's parents in some way, it becomes necessary for Rink and Hunter to investigate further.

'Rules of Honour' rattles along at a fantastic pace and it's one of those books where at the end of each chapter, I found it extremely difficult to stop without sneaking a peak at the next page. Hilton has an interesting style of writing where most of the book is written in the first person from Hunter's point of view. However we then get snippets of third person prose where we watch other characters such as the killer and some of the victims.

The first person parts are great at getting across Hunter's views as to why he does what he does; yes, he could be viewed as a vigilante or criminal himself, but there are valid reasons why he goes after villains the way he does. It's then good to slip into the third person and watch some events which don't involve Hunter and which only we are aware of. I find it really adds to the atmosphere of the book.

Overall, I found 'Rules of Honour' to be an exciting, quick read and one of those books you can get finished in a day on the beach; you just won't want to put it down. If you have ever read and enjoyed any of Hilton's previous books or the Jack Reacher series, I would highly recommend this one. It isn't quite up there with Lee Child's work, but it's the closest I've found so far. 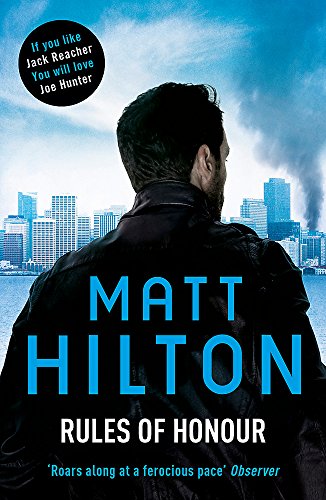 Who's your favourite action hero?