I have always known I am a writer. Inside of me is something so powerful and so profound it tugs at my heart and sends out electric pulses into my stomach. It draws my skin tight and lifts tiny hairs atop gooseflesh. I cry for my characters and laugh for their misadventures. I long know their follies and discover with them their relations, hardships and moments of pure joy.

What I never have known was why I was good enough to even try.

Although I began putting the pen to paper when I was in the fourth grade I never seriously pursued the writing industry because my parents believed it was not what measured any amount of success. Writers were not people who were paid for anything - they were people who worked a lot for $.25 a month.

Some of that was true.

What I came to know was that as long as I could pay my rent and feed my stomach there were few things I found myself needing as long as I was doing what I was destined to do.

I quit my job to become a writer and Juicy Pens, Thirsty Paper by Susan Ariel Rainbow Kennedy (Sark) was a large part of my inspiration to believe I could be everything that defined Success so long as Success was a word my parents were not defining.

When I was in Highschool I started reading Sark books because of a recommendation from a teacher: Erin. She taught us self-defense in our women's group and told us that it was important to have mental strength over physical - so she introduced us to Sark.

Juicy Pens starts with a writer's manifesto (everything in classic Sark hand-writing, bold and colorful) which bares the idea that words should come forth easily and truthfully and without troubles. Of course she also goes on to explain that she knows this is not always the case, just the wish for the manifestation.

Sark tells us that she didn't start writing until she was 35 because, much like me, she was afraid of rejection, of not doing good enough, of writing something no one wanted to read (of course, she'd go on to sell 2 million books, so hey... ).

She talks about being a writer, finding time and energy, ideas for getting your creativity going (like fill-in-the-blank games and questions!), transforming negativity and difficulties, claiming your life story and so much more! Like all of her books I did not read it from front to back but from middle to front to back and all around, not really sticking to any rhythm along the way. It's not that she's disorganized but that each page of all of her writings seems to emanate its own sense of life. That she took so much passion and wedged it into each square is remarkable.

For example, page 32 talks about someone leaving her a message on her wall that was downright mean and how she was able to take it as mere honesty and was happy the books would be taken to the half-price store so that someone else could read them! There's just so much inspiration in the permission she gives you to just be a nice, genuine person and not busy yourself with anything else.

Sark has been a teacher for over two decades. There are hundreds of products from posters to books available, each as inspiring as the next. She created Planet SARK, a place for support and general good feelings! Henry Miller gave her the SARK name (yes, That Henry Miller) in 1980 though she was born Susan Kennedy.

Her goal is to provide people with not only her own teachings but to help them discover themselves. Because of Sark, I like to Eat Mangoes Naked and take far too many naps - with permission from myself! 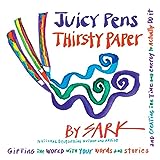 Juicy Pens, Thirsty Paper: Gifting the World with Your Words and Stories, and Creating the Time and Energy to Actually Do It
Buy Now

Definition of Success: the accomplishment of an aim or purpose.

So what Sark told me was that what I was looking for was already in front of me - it was whatever made me happy. Whether the task I set in front of myself was to eat fruit in the suit I was born with or to write the worlds most prestigious novel, my success would always be measured only by what I set out to do and whether or not I accomplished it to the best of my ability, right?

I like this woman and I think she's right.

She's also giving me permission to sleep, draw, paint, laugh, play and buy myself flowers unabashedly? Some of her books are heavier than others, beware; sometimes she will lay out naked and reveal herself to you and for some reason some people have been offended by the horrible things that happened to Sark in her childhood.

Silly people trying to make someone elses life their business.

Have you read it?

Have you had a chance to read anything by SARK?

The explanation of the word: Succulent and how it applies to her work, her experience in San Francisco and the magic manifested behind her powerful words!

Our Bodies, Ourselves
This book was written long enough ago that you probably already know what it is. If not, make sure you read it and hand it to every woman and young woman you know, because there's a lot to take in. It teaches women to love their bodies no matter how they are - while at the same time explaining things that have been asked or maybe haven't yet been faced, preparing for just about anything.
Buy Now

Cunt: A Declaration of Independence Expanded and Updated Second Edition
The title is definitely a breath stealer - the word is known to some as the most offensive in the English Language! I have read this book, though.I have read it again and again and purchased it more than once to send to female friends. It's about reclaiming a word and a purpose and ones womanhood. It's about taking power away from the negative and delivering it to the positive. It's certainly got a lot of "California thinking" in it, so you've been warned.
Buy Now