This is an excerpt from my novel, A Picket Fence in Pawpaw, but I think it works well on its own. So I thought I'd call it a (very short) short story, change the tense from past to present, and share it here.

I hope you enjoy your (short) stay, and please leave a comment in the guestbook below to let me know what you think.

On the last segment of my mother's favorite stupid soap opera, Stone found out that Rita had lied, that Tory is actually Donovan's baby. But Donovan still thinks the child is Stone's, and he's glad because, about two months ago, he realized he still loves his wife, Margot, who had their first child three episodes before Tory was born. Cameron was brought in for questioning about the death of his wife, Billie, who isn't really dead, I don't think. Jake seduced Lois, and they kissed passionately, but Jade saw and plotted to blackmail Jake; if he doesn't give her the Flaherty account, she'll tell Guy, Lois's husband, in which case Guy will fire Jake from Remington's, which Guy just made Jake the vice-president of. Not to mention the fact that Carly, Jakes' wife, would never speak to Jake again, which would be fine with Flame, who's loved Carly for years. Oh, and Beau, who's never been married and hasn't dated in ages because he can't seem to find a single woman who isn't interested just in his money, met a new character, a sweet-looking blond girl he found beaten in an alley and took to his place to tend to when she refused to go to the hospital.

I hear the opening music, a tenor sax playing the familiar, seductive melody, and wander as nonchalantly as I can down the hall, flop into the brown Naugahide chair and open my book. I hold it up in front of my nose.

"Can you see from there?" Mom asks me.

Mom gets up and shifts the TV my way, then returns to the couch. She crosses her legs and layers her hands on her top knee, so I sling a leg over an arm of the Naugahide chair and slump down further.

The music ends and the first scene begins. I hold my book higher and move it slightly to the right.

"Here, let's take a look at that eye," Beau says, kneeling in front of the pretty blond lady. He touches her cheek with his fingertips and holds the ice pack to her face, which she turns away from his kind, blue eyes. "It's okay," he tells her, "You're safe here with me."

Mom sighs, so I cough and flip the page.

The scene switches to Donovan and Margot, who are cooing at their newborn son, named Zane. Donovan kisses the top of Margot's head and tells her he loves her more than life itself.

Mom sighs again and clicks her tongue, which makes me turn the page with too much force, ripping it.

"If the television is bothering you," she tells me, "then perhaps you might want to read in your room."

So I say, "I ain't even payin' attention to that stupid show."

Dirk walks in as the scene switches to Guy and Lois in bed.

Mom turns up the volume of the heavy breathing and face sucking, so I say, "Hey dork!"

"Hey brat," my brother replies and whacks me on the knees with his stinky towel. He has a basketball under his arm. "Don't tell me you're watchin' that crap now."

Dirk-the-Jerk grabs for the Hila Coleman book I'd clutched to my chest the moment he walked in. "Yeah, and what're you readin'? One of those Harleyquin things, probably."

"Shut up, fart-face." I scrunch over Nobody Has To Be A Kid Forever, as my smelly brother keeps trying to pry the book away.

"That's enough!" Mom yells, then lowers her voice like a schoolmarm. "If you please, I'm trying to watch this program. If you insist on being childish, you'll have to do so elsewhere."

"Butt munch," I whisper to Dirk.

"Dumbo," he whispers over the back of the Naugahide chair, then jumps away as my fist flies up. He always has to mention the ears.

I would go after him, but ... well, the commercial is over. 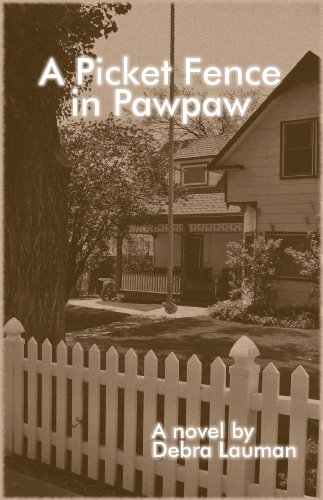 The book from which this short story came from

A Picket Fence in Pawpaw is now available on Kindle.

Picket fences can enclose not only what seem to be perfect houses and perfect lives, but also small-town thinking. In A Picket Fence in Pawpaw, thirty-six year-old Minnie Mincola takes us to Pawpaw, Pennsylvania, where this tale of the people who were part and parcel of her childhood plays out in her heart and mind. Known then as "Mouse," she thrived in the warm glow of her extraordinary relationship with her grandfather, Raymond "Pawpaw" Prine.

As Minnie looks back on events that shook her world, a child's trust becomes the woman's questions. What she had believed to be the fabric and facts of her life in Pawpaw turn out to be a network of secrets. One day, an exploration by a curious Mouse brings her grandfather, friends and events into sharp focus and sets in motion a harsh flood of reality. Youthful innocence becomes a woman's wisdom, as picket fences give way to an understanding of human frailty, forgiveness and love.