Sir Jackie Stewart is Right: Winning is Not Enough

Jackie Stewart: A champion in more ways than one

Those of you who are fans of Formula One racing are very familiar with this famous name and many of you may have already read this book.

It is a vital part of a dedicated motorsports fan's library and collection.

But this is an excellent autobiography for everyone. In it, we learn not only about his career in both racing and the business world, we also discover how a young Scottish lad learned to overcome an invisible disability.

It's astonishing to learn about what Jackie Stewart has done for the sport he loves, for Britain and for education. But when he was at school he was dismissed as a pupil who would never amount to anything. He couldn't even learn to read and write like 'normal' children.

No-one in those days understood dyslexia.

Children who couldn't make sense of letters, basic reading and writing, were simply labelled as stupid.

I'm pleased to say that I've met Jackie several times so I can vouch for something that is quite legendary about him. The man has an amazing memory. Without the ability to write notes, or a diary, he has to rely solely on his mind which is honed to perfection. My dad, who knows Jackie much better than I do, can also give testament to this fabulous ability.

There are so many stories in this book that I could tell you about but there is one in particular, not an earth-shattering event, but one that is so typical of his attention to detail.

When he became a spokesperson for Rolex, he naturally wore their famed watches at all times.

So, with typical thoroughness, he had all his shirts and jackets altered so that one sleeve was just slightly shorter than the other - just so that the watches he was promoting would always be in view. Brilliant.

Many people know, especially those who follow motorsports, that Sir Jackie is largely responsible for the improvements in the sport's safety since the days he was racing. He had a truly horrendous racing accident in 1966 and lay trapped under his car, amongst dead leaves and cigarette ends, whilst spectators tried to free him using tools from their own toolkits and all the time there was danger of fire due to the escaped fuel.

When he was eventually taken to hospital, it was on the dirty bed on a pickup truck.

He spoke out vociferously - and still does - about safety. He is quoted as saying:

'I would have been a much more popular World Champion if I had always said what people wanted to hear. I might have been dead, but definitely more popular.'

What many people do not realise is the work that he does - and funds - to ensure that no other child suffers the indignities he did, simply for being dyslexic. He shows us all that anything is possible.

Be sure to read this inspirational and entertaining book 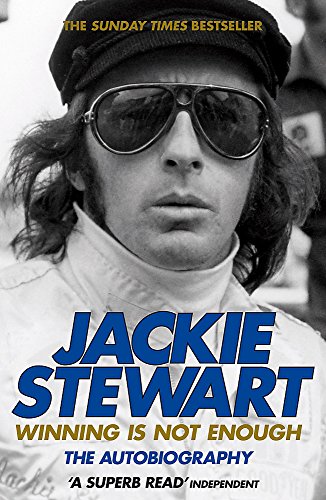 Winning is Not Enough
Buy Now

In the video below, he explains that he was forty one years old before his dyslexia was realised.

It was only when it was discovered that his son had the condition, that he realised that he wasn't stupid or scholastically inferior.

He also points out that the condition isn't necessarily a drawback, mentioning other successful people who also suffer from the problem.

If you'd like to order this inspirational book, or read more reviews about it, please use the button on the right.

The Scotsman & the Yorkshireman

In the summer of 1986, my dad was a guest of Ford Motor Company at the Detroit Grand Prix. So was an old mate, Jackie Stewart. (Oh by the way, Jackie also has a very cheeky sense of humour, particularly with the ladies but I'll go into that another time).

In his own book, my dad wrote:

'Coincidentally Jackie and I both started our careers as mechanics working for our dads,so we followed the same path for a while. How he made it to where he is today is a mystery to me but I'm convinced that he's fine inspiration to kids today who struggle with the same problems he faced'.