The Lord of the Rings as Fantasy Literature

The Beginning of Modern Fantasy

The fantasy genre of literature is becoming increasingly popular. This is due in large part to the recent best selling Harry Potter series and the blockbuster Lord of the Rings movies. The genre has existed for centuries, though the modern form dates back only a couple of hundred years. The difference between modern fantasy and its predecessor is that modern works apply a logic to the fantasy, acknowledging it as fiction rather than establishing it as truth or mixing it with folklore. For example, King Arthur is an early fantasy story.

Like many others, my great love of fantasy literature stems from J.R.R. Tolkien's Lord of the Rings. This trilogy, along with its counterpart The Hobbit, has steadily gained in popularity since the books were first published decades ago. The series is actually considered to be the first mainstream fantasy works and made the genre marketable.

Tolkien and The Lord of the Rings History

A lifetime of work

Before The Lord of the Rings, fantasy stories generally used dream frames in order to explain the existence of another world. Lewis Carroll's Alice in Wonderland is one example of a dream frame. Tolkien, however, created a fantasy world that was independent from the characters. Middle Earth did not exist in any specific character's mind; it was a real world within the context of the story.

While The Hobbit was published in 1937 and The Lord of the Rings was not published until the 1950s, Middle Earth dates much further back. Tolkien began to create his alternate world in the trenches on World War I. While the much of this content is in fact in The Book of Lost Tales , it paved the way for his more famous works.

Tolkien was a student of language and was able to use his passion for the subject to create multiple languages of Middle Earth. His ability to do this is an endless fascination to me and is an incredibly impressive achievement. While I have not learned any of the languages, there are some devoted fans who have spent hours doing just that and can now boast multilingual talents. 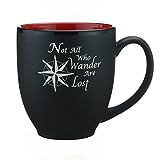 "Not All Who Wander Are Lost" with Compass Graphic - 14oz Hand Engraved Coffee Mug - Tea Cup - Anniversary or Birthday gift - By Celery Street (Bistro)
"Not all who wander are lost," is such a great Tolkien quote. What fun is life if we always know where we're going? Wandering until we find what we're looking for is half the fun of life, and this mug is the perfect reminder of that. Make a cup of hot coffee or tea and curl up with your favorite Tolkien book or movie!
Buy Now

Tolkien's Writings - There's more than you might have realized

If you're only familiar with The Lord of the Rings , you're missing out on the rest of Middle Earth. Tolkien spent years creating a fantasy world to rival every other fantasy world. He wrote decades and centuries of history for Middle Earth. Some was not published in his lifetime, but his son has collected and edited it so that Tolkien fans can enjoy more Middle Earth stories.

The History of Middle Earth - Not to be missed

Watch this absolutely fascinating video on the history of Middle Earth and how Tolkien came to create it and its languages.

The Lord of the Rings Novels

The Lord of the Rings trilogy consists of The Fellowship of the Ring, The Two Towers, and The Return of the King. While most people reading this lens have likely either read the books or seen the movies, I will keep the summary of the story sparse so as not to reveal any spoilers.

As the first book in the trilogy, The Fellowship of the Ring introduces us to the world of Middle Earth and many of the characters who reside there. In particular, Tolkien spends a great deal of time explaining hobbits and the workings of the Shire. While many readers find this portion of the book tedious, it sets up the rich history Tolkien has created and gives the reader an appreciation of just how remarkable hobbits can be.

The Fellowship finds Frodo, a young hobbit, in possession of an ancient magical ring. Through the research of the wizard Gandalf, it is discovered that this is The One Ring; it not only has the power to grant invisibility to its wearer, but it is designed by the evil Lord Sauron and corrupts its wearer. This sets Frodo on an epic quest to Mordor to destroy the Ring. However, he is not alone; his loyal friend Sam joins him, along with fellow hobbits Merry and Pippin, dwarf Gimli, elf Legolas, and men Aragorn, Boromir, and wizard Gandalf.

This Fellowship faces many dangers in their quest to destroy the Ring and as the story progresses into The Two Towers, the battle expands to encompass all of Middle Earth. It focuses on Frodo and Sam’s travels to Mordor and Aragorn’s attempts to save Helm’s Deep and the people of Edoras. It also introduces the key characters of King Theoden, Eowen, and Farimir, Boromir’s brother. As a fan favourite, Gollum plays a large part in The Two Towers and The Return of the King. The third book also tells the story of the battle of Gondor and Aragorn coming to terms with his lineage.

Through the novels, we meet ents, orcs, elves, wizards, Nazgul, and of course the memorable Tom Bombadil. Through years of a labour of love, Tolkien has created a rich and diverse world that millions of readers have found a great deal of joy in. If you haven’t read the books yet, now is the perfect time to pick up a set.

J.R.R. Tolkien 4-Book Boxed Set: The Hobbit and The Lord of the Rings
If you haven't already read the books, now is the perfect time! As fantastic as the movies are, the books are much more in depth and are worth the time it takes to read them. Remember, they have been popular for decades for a reason!
Buy Now

What is your favourite volume of The Lord of the Rings?

The Lord of the Rings was said to be unfilmable. For many directors, it probably would have been. Peter Jackson, however, has been a fan of the books since he was young and was determined to see them brought to life. He spent years working on the script and made many pitches to movie studios. His plan was to make two movies, but studios wanted the material condensed into one film. It wasn’t possible, so he kept searching. Finally, he pitched to New Line Cinemas who, instead of wanting one film, questioned why he wasn’t making three.

Thanks to New Line Cinemas, Jackson was able to re-pen the scripts to fit in more material from the beloved books. With his production team, they worked tirelessly planning how to adapt the massive works. Overall, the films were a huge success, both for the box office and for fans. There are some adaptations that die hard fans disagree with. One in particular is the exclusion of Tom Bombadil. However, difficult decisions needed to be made. Even the extended versions of the movies are over 3.5 hours, with Return of the King clocking in at nearly 4.5. While it would be wonderful if the movies could have included every single detail of the books, they would have been likely twice the length.

If you haven't seen the movies, or if you have but you just can't resist seeing clips, here's previews for each of the movies.

Favourite Movie - It's hard to choose

What is your favourite of the movies?

Which Is Better? - Move or book?

Do you prefer the books or the movies?

Lord of the Rings as Influential Books

The Lord of the Rings is not the first fantasy novel written, but it is one of the most influential. Not only did it begin the concept of creating a world separate from our own instead of a dreamscape, it inspired many other fantasy creations. Dungeons and Dragons uses many of the races found in The Lord of the Rings and this game in turn inspired many other role playing games, including World of Warcraft and Everquest. The poplularity of Tolkien's works have spawned a massive fantasy literature genre. Harry Potter, Eragorn, and Twilight are just a few examples of some of the most popular books today.

With the fantasy genre so popular today, many people can cite a fantasy book or film that they love. Many of these would not exist without Tolkien's masterpiece. Any fantasy fan should make the time to give these books a read.