If you've been to Florida, you'll enjoy this book immensely. If you've never even heard of Fort Lauderdale, you'll enjoy it if you're interested in early pioneering times, day-to-day life in the nineteenth and twentieth centuries ... and of course, this fiction-based-on-fact book features a wonderful love story in addition to hardships and heartbreak.

For this is the story of a young teenager, Ivy Cromartie, born in Florida in 1881, who left her home in what is now Miami to become the first schoolteacher in tiny hamlet of just a few families, including nine children; her new students.

This tiny village, then known as the New River Settlement, became Fort Lauderdale.

But back in 1899, when her tentative teaching career began, teenaged Ivy presided over a wooden one-room schoolhouse that had been quickly constructed by the pioneer families; often having to chase wild animals out of the building before the days classes could commence.

She soon became acquainted with Frank Stranahan, the first permanent resident of area, who ran the local trading post. Less than a year later, they married and ultimately became 'the mother and father of Fort Lauderdale', such was their influence on the growing town.

I'm an amateur local historian. The Stranahan House, where the couple lived, still stands and is now a wonderful museum and I'm honored to know the property well, plus several of the wonderful staff members.

The fact that this book is a fictionalized version of real events means that it has been misunderstood by several reviewers on Amazon.

You see, the couple had a loving, successful marriage but it was rather unconventional, that's for sure. There are reviewers who suggest that the intimate details of their marriage shouldn't have been included in the book; some going as far as to indicate that there is no substance in these stories.

The intimate details of their marriage, and the circumstances that led up to them are not fiction. I have seen videos of Ivy's own niece, who was very close to her aunt throughout her life, recalling and explaining the entire situation, as it is recorded in the book. Indeed, that niece, Alice Cromartie, is the first person that author Jane Kirkpatrick thanks in the acknowledgements section of the book. Alice even reviewed the book prior to publication. If you too want to see the video where Alice explains her aunt and uncle's unconventional marriage and the reasons behind it, click here. (It's the second video on the page).

The author's second acknowledgement was to the then director of the Stranahan House and continues with the Fort Lauderdale Historical Society - when Ivy died in 1971 she left a lifetime of personal and business documents to the society.

Frank and Ivy devoted their lives to the Fort Lauderdale area and its people. Of particular concern to them was the welfare and well-being of the indigenous Seminole Indians whose way of life was under threat from the modern developing world. They cared too about the environment - at a time when few others did. Ivy would not eat meat and performed yoga-type exercises every day, even when she was in her nineties according to her niece.

For example, Ivy's sister died in the house giving birth to a stillborn child after discovering that her 'husband' actually had a wife and children elsewhere.

But the biggest tragedy for Ivy was when Frank, worn down with severe illness and feeling responsible for this friends' financial losses in the Great Depression, took his own life by tying a weight to his leg and jumping into the New River, right outside the home he had built for his bride.

When you're ordering the book, you may wish to take a look at these too. The history of our area is absorbing. Imagine Fort Lauderdale as it is today - a huge, glittering city. Then consider that there were no permanent residents until Frank Stranahan moved here in 1896 - that's not much more than a hundred years ago. 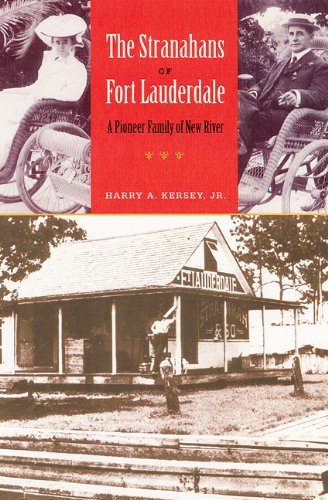 You can find out more about the Stranahan House from these videos. The second one features Marlene, a long-time docent at the house.I asked her one day how true-to-life Mystic Sweet Communion is, knowing that that she is probably the most knowledgeable person to ask. (And the book is for sale at the gift shop there, which makes it 'authorized'). She told me that she has found only one inaccuracy. Jane Kirkpatrick describes how an elderly Seminole lady died of a heart attack in the house. In actual fact, it was a young girl who died. No big deal, really...

Is the Stranahan House haunted?

There are those who believe that the house is haunted. My opinion? That's absolute balderdash.

You can see in the video above that part of the reason for this legend is that 'several people died in the house'.

That's true. But in any house that is well over a hundred years old, the same thing applies. Many of these years were the days without hospitals. (Fort Lauderdale's first 'hospital' opened in 1922 - but this was simply a small extension to a doctor's office on East Las Olas Boulevard).

Two of the 'several people' who died in the house were elderly and died of old age. Ivy Stranahan's sister.Pink, died due to the complications of a miscarriage. There was nothing mysterious about Franks death - he took his own life.

Ivy's brother Albert died in the house - of TB which was killing people with epidemic proportions in that year (1914).

The only death that could have been called mysterious was that of a young Seminole girl. But that was in the very early days when life was insanitary and medical facilities non existent. Her death could have been caused by any number of natural illnesses. Half a dozen deaths in over a hundred years is nothing remarkable.

However, this does not prevent the staff from playing up the 'haunted' theory a little - the museum needs all the publicity (and revenue for its upkeep) it can get.

I've spent hours on the property.I know staff who have worked there for many years, day in, day out.

Let's allow the gullible few to believe what they wish - but we know the truth.