The Velveteen Rabbit is the story of a toy bunny that's rewarded for his faithfulness, for loving and being loved, but only after his fur has been worn off and he's become contaminated with scarlet fever germs. Once he was real to his child companion -- that in itself was an accomplishment -- but now, by fairy decree, he shall be real to everyone!

Many of us grew up with the story of The Velveteen Rabbit. Do we ever really outgrow it? I think it's a parable for the idealist in each of us. In addition to its 'big ideas', The Velveteen Rabbit has some mature humor. Now here's another great thing about this classic tale. It's public domain! That means we can all put our own spin on it -- and many of us already have.

I enjoyed recording this tale, and I hope you -- or some small person you're fond of -- enjoy listening. On this page, I've included my own audio reading of The Velveteen Rabbit, as well as some other themed goodies: videos to watch, books to buy, lesson plans for teachers, and thoughts to reflect on. (Yes, people have written some provocative blog posts about their memories of this rabbit's tale...)

If you're looking for a professional reading of The Velveteen rabbit, you can find a link, too.

And now, without further ado, let's get real!

Listen to MP3 of The Velveteen Rabbit

Here's my audio read of The Velveteen Rabbit -- it's an mp3 version, hosted on Mediafire -- and one of the first things I recorded when I got my netbook and Logitech set (after years of not having a computer with a working sound system). You can download the story if you like.

If you want the hardcover edition -- or a DVD or bilingual version -- there are some links a bit later in the lens. But first, let's watch a play...

Some books never go out of print, but they do go through lots and lots of editions. This is a 2013 edition. Not only does it feature lush and poignant new illustrations, it features lots of illustrations. You can even find it with a (fairly) classic velveteen rabbit toy. 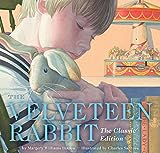 The Velveteen Rabbit: Adapted for Stage - A Charming Play

The Velveteen Rabbit has been adapted for stage more than once, and some versions take more liberties than others. In this charming stage version of The Velveteen Rabbit, Nana is the young boy's grandmother and not merely his nursemaid. This play is true to the original in many ways. You will, however, find some added scenes, like one in which the young boy is scolded for making a mess when he should be in bed... well, until Nana realizes he has been making her a Valentine. Another small moment... another lesson in love.

You can catch some key scenes from the play version here. Scene 6 is really a series of scenes that show the developing relationship between the child and the toy. The boy -- unnamed in the original, but called James here -- develops his friendship with his velveteen rabbit across the spring and summer and eventually tells his Nana with some indignation that its not a toy, it's real.

You can use different adaptations to compare and contrast... or to inspire a young actor of your own.

The Velveteen Rabbit has extended metaphors on human behavior. You might consider this quote in a classroom setting:

"The mechanical toys were very poor, and looked down upon everyone else; they were full of modern ideas, and pretended they were real. The model boat, who had lived through two seasons and lost most of his paint, caught the tone from them and never missed an opportunity of referring to his rigging in technical terms."

Children can discuss this passage and then write about it in a journal.

Guiding questions: Are those toys bragging? What are they bragging about? Is what they are bragging about... real? Have you known anyone who acted like those mechanical toys?

A Real Rabbit - Doesn't it make you wonder?

Writing Prompt: What happened before (or after)?

He was given as a Christmas present... but he is a bunny! When do you read The Velveteen Rabbit?

What season do you associate with The Velveteen Rabbit?

"Real isn't how you are made," said the Skin Horse. "It's a thing that happens to you. When a child loves you for a long, long time, not just to play with, but really loves you, then you become real."

"Does it hurt?" asked the Little Rabbit?

"Sometimes," said the Skin Horse, for he was always truthful. "When you are Real, you don't mind being hurt."

Interactive storybooks and apps allow children to listen and read along -- or read alone when they're ready. Often they use abridged or slightly simplified versions of the text. Here are Velveteen Rabbit apps for two platforms (Android and Apple).

Watch the closing scenes of the musical edition, played by children. This version is true to the original -- but for the singing rabbit and fairy. You will recognize some of the more famous lines from the book -- like when the rabbit asks, but wasn't he real before.

You can also see how the costume designer has created a design that will go from "toy" -- just little humps to suggest legs -- to "real rabbit" with dancing, prancing legs.

The Classic Story: Choose Your Edition

As a public domain work, The Velveteen Rabbit appears in many forms. You can find it with its original illustrations. You can also buy it with full color illustrations and a deep crimson Christmas "Christmas Treasury" look. The words are altered and made accessible to younger readers. But this 'classic tale' is not a young readers' edition. The words are from another era -- but not the illustrations.

The Classic Tale of the Velveteen Rabbit: Or, How Toys Became Real (Christmas Edition)
Buy Now

"Wasn't I Real before?" asked the little Rabbit.

"You were Real to the Boy," the Fairy said, "because he loved you. Now you shall be Real to everyone."

Today's toy bunnies are more realistic looking than those of 1922 -- ah, but are they more real? A number of toy makers have sought to recreate -- or suggest -- the velveteen rabbit of yore. This one is perhaps my favorite. You will find four reviews for this toy on Amazon: one by the parent of a two-year-old, one by the parent of a six-year-old... and one by a husband. Who was it who cried upon receipt of the bunny? Not surprisingly, it was the adult woman. 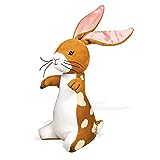 Generations of children have loved this story. A few sensitive children, though, have been so upset by the progression of events that they apparently never made it through to the happy -- and meaningful -- conclusion.

Here is an interesting blog commentary on The Velveteen Rabbit and the nature of memory.

The Velveteen Rabbit is a story for discussion as well as reading. So share this beautiful story... and make sure your little one knows it has a happy ending.

A New Twist on a Classic Story - Video

Movie makers often take some liberties. This 2009 Christmas movie is only loosely based on the old tale. In this version, a little boy goes to stay with his grandmother and discovers a velveteen rabbit that his now deceased grandmother had bought for him, but never given. There are numerous plot differences, but it's still a warm-hearted family-friendly movie. You can compare and contrast -- or just enjoy a cozy evening watching.

The picture in the second module links to Alyssa's photostream on Flickr. I doctored that same photo up a bit and used it in the opening module. She has some more rabbit-coming-to-life pictures in her photo stream, but I couldn't use them. The story she has to tell is just too sad. Yes, The Velveteen Rabbit is an evocative story for adults, as well.

The picture of the real rabbit is from bluebirdsandteapots

It is under a creative commons share alike license.

Did you read the story as a child? Have your perceptions changed along the way?

Your Own Memories of The Velveteen Rabbit?