Short Explanation: An agoraphobic is forced to give up his father's home and cross the threshold into the real world outside his front door with a little help from some unique and equally damaged people who enter his life.

Long Explanation: Thirty-six year old Jack Madigan lives at 117 Battersea Road in Boston in the town house of his deceased rock star father. Jack was nine years old when his father died as a result of a wound he received during a concert when he bit into a turtle. Not just any turtle, a snapper; a cranky one at that. It turned around and bit the mighty Baz. No it wasn't that bad a wound but it allowed entry of a common bacteria.

Before salmonella completely overtook him, Baz wrote Jack (who was at a sleepover next door) a note and stuffed it into the remains of the turtle shell after signing the underbelly. Baz believed the turtle shell would be the child's only real inheritance after he was gone. Alone, he made his way down the hall to place the turtle in one of Jack's favourite playing spots - the dumbwaiter.

Almost 30 years later, the turtle shell still hasn't been found and Jack is still living in his battered and bruised four story town house. Except today it is with his eccentric son Harlan and their creepy cat.

Growing up "the house became the strong arms that wrapped around him whenever he'd been scared, lonely, as a boy. The trousered legs he'd always been able to hide behind." A poor replacement for a father he never got to know. The town house became such a strong influence on him that he found himself increasingly fearful of leaving the safety of its perimeters. Until finally he felt he was actually going to die every time he crossed the threshold leading to the outside world.

This story covers a year in Jack's life. Probably the most importantly year since his father's death. The money has run out and Jack can barely support himself and Harlan on what he makes designing paint colors in the cellar. Now the bank is taking things into their own hands and selling Jack's town house... his supplemental father. Plus he has to deal with his ex wife's impending marriage and the fact she keeps trying to take his only connection to the outside world away from him, Harlan. 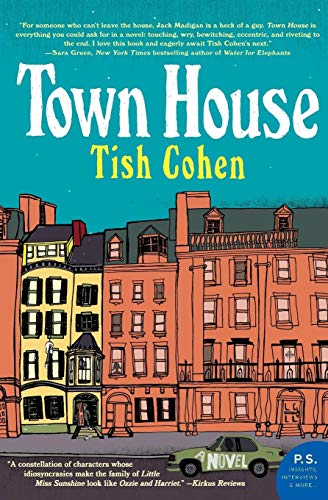 Town House: A Novel
I enjoyed this foray into the world of a romanticized agoraphobic. Jack is a likeable character that is easy to sympathize with. As are the people in his life: Dorrie the insecure realtor/love interest; quirky and secretive Harlan; Dr. Snowden, the ancient sleep deprived therapist; Lucinda the red mittened child next door who likes to bite and froth at her mother's heels; and Mrs. Brady, the one eyed cat with attitude. The characters are lively despite the dark tone of Jack's mental illness and while Jack can be sardonically amusing, the sarcasm doesn’t get in the way of the story. The opening chapter at the beginning about the missing turtle had an obvious outcome from the moment it disappeared but the characters and flow are so well written that it doesn't matter. It's easy to settle in with the characters and comfortably follow them until the end when all the pieces get nicely tucked in. I highly recommend reading Tish Cohen's Town House.
Buy Now

"Can't a man be a man, just once in his life, without being outmanned by a cat in a polka-dotted bonnet?"

Who Was Your Fave Character?

Tish Cohen and Leah McClaren - Having some fun with neurosis

Rumour has it that Town House is in development for movie production. So far it looks like it's a project for Fox 2000 with John Carney attached as the director and Ridley Scott as the producer. Doug Wright who wrote the screenplay for Memoirs of a Geisha is supposed to be writing the screen play.

Tish tells me that Zach Galifianakis and Amy Adams are set to star in the main roles.

Looking for Information on Agoraphobia?

Here are a few links that offer explanation or help for people suffering from agoraphobia. If you know of an excellent resource not listed please contact me through my bio above.

Make my day and let me know you were here. Seriously.