10 Basic Tools Everyone Should Have, And Own, Right Now. This Means You!

Elton graduated from Common Sense University, is a father, artist and is currently featured on multiple blogs, sites and even edits a few.

Living on your own is rough as it is, without things breaking. Not having the tools you need to scrap by makes it even harder. It's surprising that no one talks about tools, when discussing what you'll need when you finally do make the jump to your own place. I suppose it's seen as kind of a given. Everyone assumes everyone already knows. This, like so many things in life, is never the case.

This is hardly a comprehensive list of every tool you'll need for EVERY situation, of course. That list would be a mile long and growing. Instead, this list is...a beginners set of sorts. The most basic of tools that everyone should have. Presented for you...in no particular order.

Oh, the lowly scissors, how we always forget about you. Well, until we need you, that is. Often you'll find yourself in some cutting type of situation; a stray thread magically appearing from a shirt cuff, jutting out enough to ruin your day or convince you that everyone can see it...and thinks you're a disheveled idiot because of it. Terrified by the social implications, you scramble over to, and rummage through your junk drawer to find something sharp and crafty to off this thread; and quell your growing anxiety.

Unfortunately, you didn't read this hub until now...and must now settle for a dirty steak knife, and a steady hand.

Scissors are good for cutting paper, tape, cloth and who knows what else. People have a tendency to forget these snipping needs out of the mix when buying things for a new place. Then, find themselves (ahem) cut...short (get it) when they need them. Always have a set around for when those cutting needs arise. They're a great tool for almost any cutting endeavor. Almost.

Ah, the utility knife or X-acto knife as some might call it. It's basically a razor blade with a sturdy handle. This little beauty can cut a lot of what scissors can't handle and do it with ease. It's really useful for cutting screen, plastics, heavier fabric and delivers a more exacting cut than scissors would.

Just be careful, as with all cutting devices, it's sharp. A utility knife is really, really sharp. As was mentioned earlier, it's a razor with a handle. So, manipulate it with care and make use of all of it's safety features. Don't forget to store the blade in it's blade down, locked position, either. Reaching blindly into a messy drawer (as we're all prone to do, from time to time) and realizing your fingers found the business end of it's razor never helps your day get better. It's usually leads to a lot of bleeding and screaming.

Just so everyone feels better, here are a people demonstrating utility knife injuries, with explanations to avoid them. (Phew!) Safety First.

Oh, the mighty hack saw; as it turns out, they're not just for breaking out of old prisons any more. Sometimes, you'll find yourself in a situation that needs a quick sawing. Be it an unruly, lopsided chair, a pipe or cutting branches; hacksaws can more or less do the job.

They're small, relatively cheap and can be adapted for many uses. It's compact enough to store beneath a sink or in a drawer. Given the right type of blade, it's capable of sawing through wood, plastics, various types of metal, porcelain tile...and prison bars (should the mood strike you). Needless to say, it's pretty handy to have around.

For all of you hacksaw rookies out there; a video.

A great poet once said, "Into each life a little hammering must fall" or something...like that. Now, whether a poet actually said that or it's completely made up, it doesn't make it less true. Everyone will need a hammer at some point in their lives.

The most commonly used, and arguable most identifiable hammer is called a "claw hammer". It's "claw" portion is outstanding for pulling out crooked nails, prying up carpeting, paneling and such in a pinch.

It's extremely useful in the assembly and disassembly of anything bound together or better left smashed. Plus, it's been the weapon of choice for a thousand horror movies or more. What's not to love?

Without one, you'll be left searching for a hammer like object in the shape of a shoe, heavy lamp base or brick, all of which are extremely poor substitutes. A million cursing people with un-hung pictures and broken bookshelves can attest to that.

Who doesn't need a hammer; other than the owner of a hammer factory? Besides him, everyone else should have one. So, get one, a.s.a.p. You'll lead a happier more fulfilling life.

If you turn the volume down, this looks like an infomercial for a serial bludgeoner.

Screwdrivers, the workhorse cousin of the murder friendly ice pick. This tool would seem like a no-brainer to most, being that the entire universe is held together by screws. Still, it's surprising to find that people don't have one handy...or only own one type. That type? Fantastically, it's always, the opposite of what's needed. Damned Murphy's Law.

A Phillips screwdriver has a head with pointed edges in the shape of a cross. It neatly fits into the cross slots of it's Phillips screw counterparts.

It's flat head screwdriver partner has just that...a flat head. This type fits screws with just one slot across it's head.

Why do you need both? Because the world uses both...always. It likes to keep which one it currently favors a secret from you. As anyone who has had to repair an errant piece of anything...or baby crib; the screaming agony of not owning both will halt the progress of your life and leave you depressed in a fetal position.

So, it's best to stop those kinds of things before they happen. Do yourself a favor; get both (or a multi-set is even better).

Ladies and gentlemen, the fun filled world of screw drivers...

Many times during the course of living alone, you'll run across a bolt or nut that's begging for a good tightening or loosening, whatever you're into. Sometimes, that bolt or nut is going to need a little more "umph" than your reddening fingers can deliver or will be outside the operating parameters of an adjustable wrench that's always too big. Needless to say, it's just easier to grab a socket wrench, fit the right socket to it and have at that bolt.

Unfortunately, the bolt makers of the world and...the world in general can't agree on a "standardized way" to make bolts. So, there are two common types of measurement: standard (inches, foot, etc.) and metric (centimeters, millimeters, etc.). Naturally, there are also two types of sockets included in most sets. The more elaborate the set (and more expensive, usually) the more expansive the measurements it contains, of course.

A good mid-range set (price wise) is usually a great place to start. As with McDonalds chicken nuggets, a 20 piece is probably good to start with and might be all you'll ever need.

As stated before, this list is far from comprehensive; to illustrate that, having just two sets of pliers is at most, extremely basic. In terms of plying...things, these two kinds are very adept at handling a lot of situations that call for a set of pliers. Be it holding a bolt in place or straightening wire, these would work fine.

I bought the set below from Amazon not too long ago (as every pair of pliers went missing all at once [KIDS!]). It's a 7 piece set with a good array of pliers to suit just about (not all, I found out) every problem. They're well made for the price and comparable to the price of the same thing at a nearby "big box store" (Walmart--who am I kidding.), but I didn't have to leave the house to get them--which is always a bonus, amiright? Plus, I like getting packages. It's like Christmas. 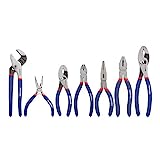 When Charles Lindberg took his solo flight across the Atlantic, he said he brought only "gasoline, sandwiches, a bottle of water, pliers and a Crescent wrench". Due to their incredible versatility, he felt he didn't need much else.

You shouldn't either. An adjustable (or sometimes called Crescent) wrench is a time honored standby for a myriad of situations. It's used in almost any tool -centric field, from plumbing to auto repair. Why don't you have one already? No, seriously, why? Everyone is worried about you. Go get one.

Never has there been a more underrated tool than the Allen wrench. It's hexagonal shape and the corresponding screws and bolts they fit, are used in manufactured goods the world over. Yet, you'd be surprised how many people still don't own a set.

If you've ever been up at midnight, Christmas Eve -- trying to put together pre-fab furniture or a child's bike, you probably know how often they're needed. You're probably apprised of how many curse words they hold at bay.

They're very cheap to obtain and are great to have when the odd "Oh, that's just great, I need an Allen wrench for this thing?!" situation arises.

If the Myth Busters have taught humanity anything over the years, it's that duct tape is essential for living. Okay, maybe not "essential", essential, but, it makes our lives run a lot more smoothly. Duct tape is good for a lot of on the fly home repairs. It can hold things in place, bind things together, it's even used to plug leaks. It's a "must have" for any tool box or household utility drawer.

These tools won't cover every mishap, but, will help with a lot of life's little foibles. I like to think of these as a "starter kit" of sorts. Enough to get by, but, you can always, ALWAYS use more.

A couple of honorable mentions I'd like to throw in here:

There isn't a rule book for life or any kind of reliable instruction manuals, which is unfortunate. A handy guide for when you're finally on your own would have saved a thousands of frustrated people from setting their almost assembled IKEA offerings ablaze.

The truth is, a lot of things slip under the radar and are taken for granted. Parents (well, some of them) tend to have the tools of everyday life on hand...for all of our lives. Yet, we never take a minute to realize that they had to get them at some point. Even then, we never wonder how they came to settle on their specific melange.

So, consider this...a starter list for your first time out of the nest.