Worm composting? You can't go wrong with keeping Red Wiggler worms for the multitude of uses they can offer in your house indoors and outdoors at your lawn. Red Wiggler worms are well known by gardeners and farmers for their efficient worm composting prowess. Red Wiggler worms are expert in aerating the soil because of their behavior being Epigeic, meaning they live near below the soil's surface. Epigeic class worms won't burrow any deeper than 12 inches from the soil's surface, making them the perfect worms for loosening the soil and thus aerating it. Their other vital roles for nature in the soil includes: moderating PH level, enhancing good microbial act within structure, breaking down minerals or plants and regurgitation of minerals. The Red Wiggle worms are in no doubt should be praised for all of the wonderful benefits they give to your garden and to the environment as a whole. 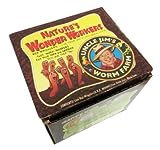 Red Wiggler worms, Red Worms, Tiger Worms, composting worms, trout worms and manure worms or whatever is it that you want to call them are versatile and very popular amongst worm species that are perfect for worm composting, fishing worms and production of worm composting. They Scientifically fall under the Eisenia genus name and they are on the specie name Fetida. Especially in captivity, these Red Wiggler worms produce large piles of organic substance through worm composting that can be naturally found in their natural habitats in: natural compost piles, animal manure, animal carcusses, decaying leaves and plants. It is also very popular on the internet as a product on online worm farms.Here are more things you need to know about Red Wiggler worms and Vermicomposting.

Red Wiggler composting worms or Eisenia Foetida are very hardy worms- easily adapting to any kind of environment. Red Wiggler worms has a wide range of tolerable temperature ranges of 16° - 28°C (60° - 80°F) and are comfortable in a PH of 7. Red Wiggler worms are quite sluggish at their lower tolerable temperature ends but when the temperature of their environment is on their tolerable higher ends, they double their activities. On the higher tolerable ends of Red Wiggler worms, as long as there's an abundance food, they can eat as much as 1 ½ times their own body weights of food in organic waste and produces worm castings equal to75% of their body mass in 24 hours. Worm Castings or worm poop are very beneficial to a plant's growth and bloom. Worm casting is much richer in nutrient as compared to ordinary garden soil. Worm poops are 5 times richer in nitrogen, 7 times richer in phosphates and 11 times richer in Potassium.

Red Wiggler worms are not that so sensitive to any form of light and heat. In captivity, Red Wigglers are very prolific. They can lay an egg case or cocoons every 7 days. An egg case contains about 2-4 baby Red Wiggler worms inside. After an incubation of 23 days, the eggcase will hatch and the juveniles that are about as thick as 4 human hairs and as long as ½ inch will emerge and in about as short as 3 months, they will become sexually mature. Red Wiggler Worms will easily multiply in great number in just a short amount of time if kept happy in their environment given that they are already hardy worms. So raise a worm may be it for worm composting, producing worm composts, as fishing bait supply and even as a family pet.