Best Emergency Power Generators and Batteries: You Got the Juice?

Don't Have an Emergency Generator? You Need One

Thanks for visiting my hub on emergency generators. The subject matter here is very much in line with that discussed in my hubs on Home Emergency Kits and Car Emergency Kits.

Typically, in an emergency situation, one of the first things to go is eletrical power. Unfortunately, we as a society have grown dependent on electricity to an extraordinary degree, so having another source of power during an emergency is paramount. Fortunately, power generators are pretty common these days, so it's merely a matter of finding one that suits your needs. Generally speaking, there are two different types of generators: battery-powered and gas-powered.

Battery-powered generators or "power packs", as the name suggests, tend to run off of a battery. In most instances, these devices can hold a charge for months, and can be recharged merely by plugging them into a standard electrical outlet. There are various brands and models to choose from, tincluding the following:

This particular model is the #1 seller in the "power packs" category on Amazon. It comes with both AC and DC outlets, and includes a built-in 5-watt flashlight, AM/FM radio and digital alarm clock. It also comes with it's own jumper cables, and is advertised as being able to run a vast array of products such as camcorders, televisions, video games, and computers.

With 270 reviews on Amazon, the Duracell 600 is typically considered to be great at powering and charging devices (eg, cameras, cell phones, laptops); excellent for jump-starting vehicles; and ideal for powering electrical devices on camping trips, at tailgate parties, and the like. However, at a tad over 29 lbs., it's considered a bit heavy.

The Cobra CJIC 350 is touted as an ideal solution for power outages, dead batteries, etc. In addition to jump-starting car batteries, it has AC and DC outlets for powering household appliances, cell phones and much more. (It even comes with an air compressor.)

After 41 reviews, it tends to get high marks for its ability to power numeorus devices for various outdoor activities, including camping, boating, outdoor wedings and more; jump-start vehicles and inflate tires without issue; and hold a charge for a long time. It's very versatile, and - at just over 18 pounds - extremely portable. 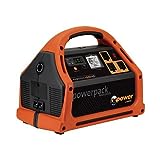 Like many other power packs, the Xantrex 600 comes with AC and DC outlets, AM/FM radio, and a digital alarm clock. Thus, as expected, it can run varius tools and devices away from traditional power sources like a wall socket. Moreover, it has a rechargeable battery that can be powered up via any standard household electrical outlet.

With 127 reviews on Amazon and a solid 4-star rating, this power pack gets praise from reviewers for being an excellent source of power during power outages. It does a great job of powering items like likes and computers, as well as recharging mobile devices like cell phones, iPods, what have you. (Needless to say, it also does wonders in term sof jum-starting vehicles.) However, tipping the scales at almost 30 pounds, it might be considered a little on the heavy side.

One thing you'll notice right away with respect to the difference between power packs and gas-powered generators is that the latter are clearly larger and more powerful. Gas-powered generators are what you'll really want in terms of powering big appliances like refrigerators, freezers and more.

This generator will provide excellent emergency power for the home or office. With 24 reviews on Amazon, it essentially has a 5-star rating, with most customers being impressed with its ability to simultaneously run multiple items (e.g., refrigerator, computer, television, etc.) during power outages. In fact, several reviewers specifically mention its usefulness during outages in the wake of Hurricane Irene. Other benefits are its easy assembly, and the fact that it is relatively quiet compared to most other gas-powered generators.

This is another well-received generator that seems to have no problem powering large appliances. Following 145 customer reviews on Amazon, it has a more-than-respectable 4-star rating, with stellar comments on the ease of assembly and it's long running time - one customer said he was able to run it for 14 days straight with no problems. Items noted as being powered by this generator (usually in the wake of a natural disaster, like a snowstorm, hurricane or tornado) include air conditioners, televisions, microwaves, refigerators/freezers and even satellite dishes - not to mention a host of smaller appliances and devices. 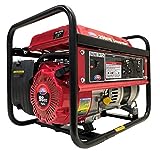 If you find that your power needs don't merit one of the bigger generators, this model is probably exactly what you're looking for. Although a bit smaller in size than some of its brethren, this generator is just as durable and more than holds its own - plus, it weighs considerably less than 4,000-watt models.

Looking at the 127 customer reviews this model has received on Amazon, it is notable for being able to power a wide variety of appliances simultaneously - e.g., refrigerator, lights, televisions, computers, sump pumps, etc. Custmers also praise its quick start-up, with many saying it worked essentially right out of the box. In additon, it received high praise in terms of price versus utility, with numeorus customers feeling they got more than their money's worth.

In conclusion, it seems that whether you wish to go with a power pack or gas-powered generator should really depend on its expected use. While it is clear that power packs can indeed power appliances and the like, they are probably better utilized for smaller jobs or short-term tasks like jump-starting vehicles or charging mobile devices. (It's probably not a bad idea to keep a power pack as part of your home or car emergency kit.) For long-term, extended use, you will probbaly want the more powerful gas-powered generator, as these have a lot of juice and can keep you living in a somewhat "civiized" state during an outage - with air conditioning (or heat), television, computers, etc. - until power is restored.

Do you have an emergency generator?

If so, is it gas-powered or electric?