There are few things nicer than mixing up your own milkshake..especially on a beautiful, warm day when the sun is shining and you're just hanging loose, enjoying some leisure time. Be it a healthy concoction of soy milk mixed with bran and lecithin or a decadent shake with full cream milk, sweet syrup amd crushed ice, a milkshake maker is just a fun and useful kitchen implement to have around.

There so many varieties of milkshake mixers on the market it's hard to know which one to buy. Things to consider are: function, ease of use (including being easy to clean), quality, looks and price.

As with most things, you get what you pay for and it's worth investing in a solidly built milkshake mixer, rather than a flimsy cheap one, even if it looks really funky. Milkshake makers take a lot of punishment, so get a solid one. 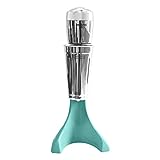 The Waring PDM112 drink mixer is a good, sturdy machine with smooth and clean, functional lines and a stylish retro feel. It's pricey but if you're serious about your milkshakes, it's well worth the money.

This model features a heavy duty 2 speed commercial motor, with a five year warranty, a large cup capacity (stainless steel) and is really eay to clean, using soap and water. It's also incredibly simple to operat - you just slip the cup over the mixing mbit and secure it onto the specially designed lips. Here's a very simple, delicious shake recipe to make in it:

The name "Hamilton Beach" is synonymous with milkshakes, since they were the first to produce those early commercial milkshake machines way back in the early days, before WW2.

This blender has classic milkshake mixer styling, large stainless steel cup , two speeds and a tiltable head for ease of use and cleaning. Great for thick shakes and soda drinlks.

Aesthetically, this is a great looking mixer and has a retro charm that would look great sitting on most kitchen benches. This is a commercial quality mixer - the kind you slip the cup under and it takes off. It's expensive but will last for years. Available

Place ingredients in a milkshake mixer and blend until combined.

If power saving is your thing, you try a hand cranked milkshake maker, which actually works very well for most milky concoctions, including smoothies. Devoid of batteries or a cord, it can also be used for beating eggs and whipping cream - very handy indeed.