Best Way To Get Rid of Fruit Flies

How to Get Rid Of Fruit Flies

At work our infestation of fruit flies started out slowly, but became overwhelming. One of the best ways to get rid of fruit flies is avoid attracting them in the first place. We believe there were two main factors that brought about our problem.

We found out the cleaning crew was not changing out the garbage bags. They were simply emptying them into larger bags. This meant there would sometimes be food particles left on the inside of the bin. There would be a swarm of them around the garbage pails at peoples desks.

Another problem was people were bringing in the food from our community garden and then leaving it sitting out on the counter. That may have even been where they came from in the first place. If it wasn't, food lying around certainly gave them a reason to stick around.

After awhile these little insects actually became a huge distraction. You couldn't go five minutes without having one fly by your face. So when people started complaining they called in the people who handle our pest control to see if they could get it under control.

The pest control company brought in Vector 960 Fruit Fly Traps and placed them strategically throughout the office. They are relatively small so when they first put them out, some people didn't even notice them. What they did notice was that within a few days we were able to get rid of the fruit flies. 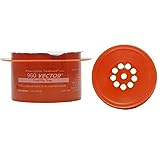 This is what the professionals chose to use at my workplace. I know they work as I saw it first hand. If you want to get them they are available to the public on Amazon.

If you want to get rid of the fruit flies you need to be strategic with where you place them. For instance, if you have an infestation in your kitchen, it would be useless to put them in your bedroom. The same is true on a smaller scale. You want to put them close to where the highest concentration of them were last seen.

You can also try making your own fruit fly trap. To do this you will need a jar, paper, tape, dish soap, and apple cider vinegar. Please note that it must be apple cider vinegar, regular vinegar will not work. They have different scents to them and the scent is what attracts the fruit fly to the trap.

Take your jar and put the apple cider vinegar inside of it. Then add a little bit of dish soap to the liquid inside of the jar. The dish soap is what will make the surface of the liquid inescapable for them.

Now roll your paper into a cone shape and tape it to hold that form. Place that into the jar with the small end inside the jar and the wide end sticking out the top. This gives them easy access to get in put difficulty for trying to fly back out.

See a sample of the design in the picture below.

The Vector and the homemade style fruit fly traps are not visually appealing. The one by Vector you might be able to hide behind a small appliance on your counter top. The homemade one would be difficult to keep out of sight.

If you need one for your home but you are worried about what your guests will think when they see it, there are prettier fruit fly traps available. There is one made by Terro that is designed to look like an apple. You could leave this out on a windowsill and people will just think it is a knick knack that you have on display.

How to Get Rid of Fruit Flies 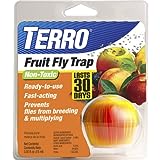 If you are worried about your trap not looking pretty or blending in with your decor, then you can get the Terro Fruit Fly Trap instead. It is very similar to the other traps however it is designed to look like an apple, so it is more visually appealing.

Which Do You Prefer, The Professional Choice, Homemade, or Pretty?