Flowers that bloom in June

Initially Hydrangea came to us from Japan. There are different varieties of this plant. All of them are absolutely gorgeous but all demand different pruning and all blossom at a different time. In our garden June is a time when Hydrangea Macrophyla and Hydrangea Serrata are in blossom. Once in a couple of years they should be cut to the roots. It encourages growth of new stems. Hydrangea loves penumbra and a good watering. As an option it can be planted in a place with morning sun. If you want to keep it safe in winter, you have to think about a good cover material. In our garden we do not have many of these plants, so they grow in pots which we hide in a basement for winter time.

Hydrangea loves an acidic soil but in our garden it is planted in a universal soil. If you plant it in the acidic soil and add some alum it will turn blue. This feature is peculiar to all species of Hydrangea except the white one. Depending on the amount of alum and acidity of soil, the coloring of hydrangea may vary from blue-sky color to pink with all shades of purple. Experienced gardeners can reach a variety of colors on the same stem. They plant hydrangea in a pot, submerge a wooden plank in a pot to a depth of 2 inches thus separating the pot into two parts. It gives a possibility to pour alum from only one side of it. I am not experimenting with color so all photos reflect their natural color.

Attracting Butterflies & Hummingbirds to Your Backyard: Watch Your Garden Come Alive With Beauty on the Wing (A Rodale Organic Gardening Book)
Buy Now

This plant also has an Asian origin and came to us from China. I was always delighted by the capacity of this plant to reach a height of 2-3 meters just in one season. Although Buddleja is a bush, it can regenerate each spring from the roots.

Buddleja won the love of gardeners by a decorative crown, abundant flowering and wonderful honey aroma. It blossoms from June till autumn. The fragrance of Buddleja attracts different insect pollinators, including a huge number of butterflies. Therefore Buddleja is often referred to as a Butterfly Bush, Orange-eye Butterfly Bush. Numerous small flowers of the plant resemble the lilac and sometimes it is also called an Autumn Lilac or a Summer Lilac.

Buddleja in not demanding in growing. It's grown normally in the nutrient and moderately moist soil in a sunny, sheltered place. It needs to be watered in the summer and covered by fallen leaves in a winter. It grows quickly and blooms on 2-3rd year after sowing. The most favorable place for planting it is a sunny place, with loose fertile soil and normal humidity.

This shrub is propagated by seeds, which will appear in October, as well as by softwood cuttings. You can also divide a bush if you wish. Buddleja is used for single and group plantings, for creating flowering hedges to mask unattractive places. This plant can be combined with other low flowering shrubs and perennials. It is also used by those who specially collect plants to attract butterflies. Last summer we saw several butterflies on one plant at a time!

This plant is named after a German botanist Adam Lonitsera, who lived in the XVI century. Today it is widely known throughout the world and has more than 150 varieties bred for decoration.

Lonicera loves sunlight and needs place on a sunny side of your yard. This pretty flower is not demanding as to the soil conditions. It grows anywhere, but you will see the best decorative qualities if you plant it in a fertile loose soil. In the spring the dry and damaged branches should be cut. If you live in a region with severe winters you should pay much attention to wrap it into textile. This winter was especially severe in Ukraine and even such precaution did not help. Lonicera Henry and Lonicera Hekroti Goldflame were fine, but we lost Lonicera caprifolium. All that was above the snow level was frozen. We cut these dry stems and did not expect much, but it gave new sprouts pretty well and hopefully we will see it blossoming again later on this summer.

The flowers and fragrance of this clambering plant are exquisite. Their fragrance can be compared to Gardenia. Different varieties of honeysuckle have different scents but all of them attract lots of bees and bumblebees.

Astilbe is a well-known traditional ornamental plant. It was imported from Japan to Europe at the end of XVIII - early XIX centuries. Astilbe blooms for a long time, 20 - 40 days, depending on a variety, from June to September. It is believed that the beauty of Astilbe largely depends on the density of the inflorescence: the higher it is, the more spectacular this plant. After the flowers fade and the leaves fall, brown panicles will continue to hang up and you can use them for winter bouquets. I love Astilbe of all shades and colors. Astilbe grows well under a direct sun, but not everyone knows that this plant is good for shady gardens too! Moreover, at home, in China, this is a typical forest plant. In our garden it is also planted in a semi-shade near hydrangea. Astilbe loves good watering especially if placed in a sunny place. Without water the tips of leaves and stems will dry.

Astilbe will grow in the same place for 4 - 5 years. It is propagated by seeds. Very small seedlings usually appear within 2-3 weeks. Seedlings will bloom on the third - fourth year. But usually it is propagated by division of roots. The best time for this - spring and autumn.

Echinacea was introduced into cultivation in 1692. The name of the plant comes from the Greek word echinos - prickly.

The Atlantic North America and Mexico are a homeland of Echinacea purpurea. It grows there wild in the fields or limestone wasteland, in dry steppes and in damp rich soils, but always in open spaces.

In Europe, Echinacea came shortly after the discovery of the Americas and has since been cultivated as a medicinal plant in Germany, France, the United States, Moldova, the European part of Russia, and Ukraine.

Bright colorful spots of Echinacea attract attention in June-August. Echinacea purpurea - a perennial herb 90-130 cm tall with beautiful flowers that resemble large daisies. As an ornamental plant Echinacea is planted on the lawn in separate groups, in combination with a low-growing perennials and near the trees. American Indians knew the healing power of Echinacea, a century ago it was cultivated and used as a remedy for various diseases.

Echinacea is said to be an excellent honey plant and attracts many butterflies and bees. I cannot prove it for sure as we have Echinacea Purpurea which apparently does not attract any of them. Echinacea prefers soil rich with organic. It likes direct sunlight, but tolerates penumbra as well. Echinacea is resistant to high and low air temperatures.

As an ornamental plant the most popular are Echinacea purpurea and Echinacea strange. Apart from the traditional pink-crimson palette, there are varieties of Echinacea with orange, yellow and white colors.

Echinacea is propagated by seeds and by dividing the rhizomes in early spring or late fall. Adult plants usually overwinter well without shelter. In one place Echinacea grows well for 5-6 years. At the end of flowering stems are cut down to the ground.

Monarda is one of my favorite plants. Monarda is often called Bergamot. But it's actually not quite true. A real Bergamot - a citrus tree which gives fragrant pear-shaped fruits with the size of an orange and a color similar to a lemon. It is grown in the subtropics (the birthplace - West Indies). It is also an essential oil plant, valued for medicinal oil extracted from the rind of fruits, flowers and leaves. This oil is used in the manufacture of true bergamot tea "Earl Grey".

This year, due to the severe frosts Monarda was frozen in our garden, but we had seedlings from previous years which survived and gave nice stems. In general it took 3 years till it started to blossom from seeds. Variety was not the same as it was in the last year but the bees pollinate it with the same enthusiasm as last year and do not care for its color :-).

Monarda is propagated in several ways: by seedling, by sowing in an open ground –as soon as the soil is ready and by dividing of bush. In the initial stage of growth this flower likes heavy but infrequent watering especially in a dry weather. 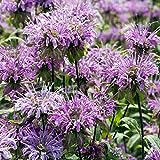