How to Grow Morning Glory

Morning Glory seeds are available in many colors. Morning Glory or Ipomoea belong to the family convolvulaceae which boasts over 500 species.

As food, especially ipomoea batatas whose tuber is known as sweet potato and originally grown in the Pacific Islands and water spinach, ipomoea aquatica used in South American and Eastern Asian cuisine.

The seeds are generally considered to be poisonous, so advise children in your neighbourhood not to eat the seeds, else deadhead the flowers as soon as they wilt to prevent the formation of seeds.

Some seed suppliers coat their seeds of 'Heavenly Blue', the most hallucogenic of them all, with a vomitting inducing substance, as a safety precaution against accidental ingestion. 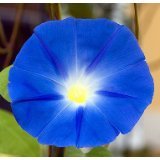 Morning Glory are so-called because their flowers unfold daily at first light and die the same day, only to replaced by new flowers opening on the plant.

Some varieties, notably ipomoea alba (with 6" white flowers) opens in the afternoon, and yet other varieties open at nighttime, the so-calledmoonflowers.

Morning Glory vines grow in a spiral and the direction they take will always be the same, no matter how much you try to get it to grow in a different direction, it won't as it has been pre-programmed to grow in one direction only.

How to Grow Morning Glory

Morning Glory are generally considered to be annuals (at least in places that get frost), though some varieties are perennial.

They are exceptionally fast growing vines and are best planted near a wall, trellis or chain-link fence that their tendrils can hang to and away they go, zooming 20' or more up the nearest structure, whether that be a street lamp or a tree.

Morning Glory vines do not like being transplanted, so it is best to plant the seed where you want them to grow, unless you live in an especially cold area and want to start them off under heat to give them a longer growing season. In this case, plant them in

peat pots that can be placed directly in the garden soil whole when the last frosts are finished.

The outer seed shells of ipomea are particularly hard so it is best to score them with a knife prior to soaking in water for 24 hours, then simply push them into the ground where you want them to to grow to a depth of roughly the same as the seed.

Germination should take place within a week, and if you planted more than one seed thin out the smaller ones leaving a planting distance of about 8" apart.

They are not particularly fussy about their soil type, in fact it may even be better to plant them in infertile soil, as added fertiliser will give you plenty of green leaves at the expense of flowers.

Do not overwater as Morning Glory prefer to be on the dry side.. A place with average rainfall should be sufficient.

They like sunshine if at all possible, so try to plant them in a position where they can at least receive morning sun.

Other Morning Glory Seeds available at Amazon include:

The wonderful thing about growing a new variety is that you get to pick it's name! 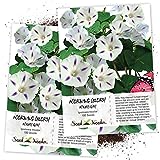 There is a fabulous range of Morning Glory seeds available at Amazon in a beautiful range of colors, that really we are spoilt for choice.

We can only thank all those growers over the years who have spent countless hours cross-pollinating different varieties of Morning Glories to reach the level we have today.

To cross-pollinate, growers have to take the pollen from one flower and add it to the stamen of another.

They would have to keep careful records of which type of flower they intermixed, and also cover each pollinated flower with a bag of some sort to prevent bees or other insects from causing cross-contamination.

Quite often, specialist growers will grow theses flowers in a commercial greenhouse under controlled conditions.

They then collect the seed head of this specially chosen flower, and grow on all the seeds.

The flowers may be identical to either one or both parents, but every now and then a brand new flower will appear, with a new color and new characteristics.

It is that flower that they will then concentrate their efforts on, and grow more the same, or interbreed them until they have enough seed to launch a brand new variety in the shops.

Quite amazing then to think of the number of man hours that goes into producing each new variety, and how many years it must take.