Accolades and Perks to living in a Resort Community

It’s no surprise that Park City, UT, was named 2013’s ‘Best little town in America’ by Outside magazine considering the mountain town’s rich history and active legacy. The resort community is no stranger to awards - the three local resorts (Park City, Deer Valley, and The Canyons) consistently rank in top slots both nationwide and worldwide for outdoor sports. In 2002 the city, along with Salt Lake City, hosted the winter Olympics. These accolades bring tourists flocking in and lend consistent strength to the community’s property value.

Whether looking to buy or build a home, property value in Park City is hard to rival. Few other places offer the feel of isolation alongside the convenience of easy access. For these reasons and more Park City has proven to be robust in both culture and value. 2013-2014 is seeing the house market healthier than ever - and signs only point up! According to Park City Associate Realtors the region was among the last in the nation to feel the effects of recession and among the best poised for rapid recovery.

Compared to other Ski Communities

As a homeowner, the tourist industry is an ideal place to own property since renting can prove to be a solid source of revenue and homes in highly sought-after markets retain their value. If looking at property in this community an advantage is having three renown resorts making the city a destination worldwide - Deer Valley, Park City, and The Canyons - at your doorstep. ‘Parkites’ are proud of these local gems which consistently rank in the top 10 resorts (via SKI magazine) and can boast of continued success in 2014 awards. This year the results are in: Deer Valley #2, Park City Resort #5, The Canyons #10.

When compared to other ski communities (via Western Mountain Resort Alliance) Park City is shown to have a distinct advantage over it’s competitors. Also note the upward trend from 2012 to 2013. This growth is consistent with the rise in tourism (view lodging stats here), paralleling property value.

An exciting market in a vibrant community

"It's an exciting time in real estate. Buyers are finding great opportunities and prices have come back to allow new sellers the opportunity to sell again."

- Jeff Spencer, President of Park City Board of Realtors.

Market trends are the highest they’ve been in 5 years for both sales and property value. Tightly linked to real estate success is the engaging environment and vibrant community. It doesn’t take long to fall in love with the former mining town. Perhaps the best people to ask are the local Olympians - after a brief visit for the 2002 winter Olympics over 100 top competing athletes have made Park City their home. Whether for training or recreational living, an active residency creates a vivacious atmosphere around and about the city.

“Everybody here either is or pretends to be a pro athlete,” says Stacy McCooey, physical therapist, “That means great job stability for me.” via Outside Magazine.

In addition to the outdoor resources that draw tourism, there’s another notable event that has put the community on the world map: Sundance Film Festival. Founded by Robert Redford in 1981 the tradition continues each January and brings thousands of moviemakers, celebrities, film buffs, and the who’s-who of global communities to the valley that is Park City. During the event the biggest movie producers and smallest stardom hopefuls celebrate in the shadows of snow-capped mountains. For renters it means high revenue. For locals it means a front row seat.

An economy back to pre-recession highs

The improving signs in real estate have been consistent in the past two years and in the last month alone prices have seen a steady incline forward - meaning a high turn-around that is forecasted to last for years to come. If looking for an investment that pays itself off then now is the time to buy in this region. During a call to Jeff Spencer, Resort West Realtors, he commented that sales have seen a 22% increase in 2013 that is expected to continue - and in fact, if sales fall at all, it is likely to be as a result of limited inventory rather than low market.

Park City is an exciting and safe area for both part time and full time residents. For families it’s important to know that quality education is available. Park City has 8 schools from grades K-12 with top marks along with private school options (visit http://www.pcschools.us/ for more information). Crime rate is low, as expected in Utah (Visit http://crimereports.com for more information). The city is now seeing additional stabilization in economy following the opening of a new Medical Center in the fall of 2009, bringing in jobs and helping to ease the fluctuations of tourist-based revenue for residents who are year-round.

Utah in general has a resilient position when it comes to the nation’s recent economic downturn, meaning it has been and continues to be a prime area for development. An insight into the recession’s impact in Utah: “Because of its relatively diverse economy, Utah remained healthy, acting as a magnet drawing new residents and businesses from neighboring states and throughout the nation. As a result, numerous economic records were shattered as its population, industries, and employment grew. Up until late in 2008, the state economy continued to set records for the longest sustained period of economic expansion it its modern economic history.” (via the Park City Chamber & Visitors Bureau Economic Profile - January 2014)

Only a 30 minute drive from SLC international airport 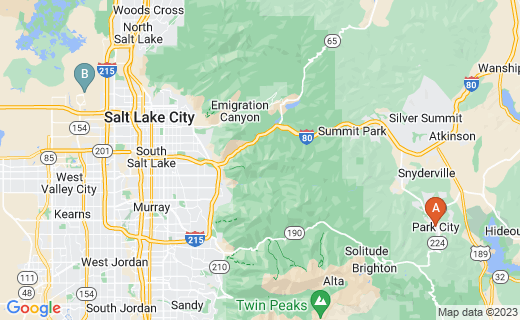 More to do & see in Park City

If Park City isn’t already on your list of prospective places to live or build - it should be! Some local must do’s while prospecting in Park City?

Have you visited Park City before?