Eliminating Smoke Odor From Your House

The Smell of Smoke

Smoking can cause some of the strongest odors in your home, and smoke odors can be difficult to eliminate.  If you live in a house that smells like smoke or if you live with someone that smokes in your house, there are ways that you can eliminate the smell of cigarettes in your house.  I was recently dealing with this problem as my roommate tends to smoke inside sometimes.  Its a very filthy habit and he opens his window which is good, but still the odor is horrendous.

Its been hard to convince him not to smoke in the house so I decided to take matters into my own hands and I took an interest in air purifiers that eliminate smoke odor or odors from smoking.  I ended up finding an air purifier that is called the "smoker cloaker".  To my surprise the company makes all types of smoking products that are high quality including the smoker cloaker.  Everything from air purifiers for smoke odor to humidifiers for cigars, they had it all.

So I took some time to look into the Smoker Cloaker made by Csonka and I decided to order it.  I've been using the Smoker Cloaker for several days now and I'm really happy with it.  It does a great job of eliminating odors, including odors from people smoking.  Plus, the air smells a lot cleaner.  The Smoker Cloaker operates smoothly and quitely so that was nice too.

If you've had this problem too and your dealing with odors from people smoking cigarettes, I strongly recommend you take a look into getting one of these air purifiers.  It does a great job of cleaning and filtering out the air and now I'm so relieved that I don't have to feel embarrassed about a house that smells like smoke.  I would rate the smoker Cloaker 4.5 stars! 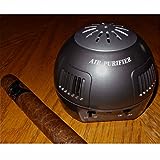