Go Green: Lavender laundry detergent you can make yourself

Get on the band wagon and Go Green! For just pennies a load, you can make your own easy, inexpensive and environmentally-friendly lavender laundry detergent. I've used this for my own laundry and was not only amazed at the monstrous cost savings but also at it's ability to clean my clothes and care for my fabrics better than the harsher and more expensive soapy store brands. You'll notice there isn't even any "soap" in it! The combination of these simple ingredients does all the work and does it well.

After you mix your ingredients, store them in any reusable plastic container you may have lying around. I used plastic milk jugs. The benefit of this is less garbage being hauled out to your local landfill and you're not bearing the cost of new container every time you refill it.

The ingredients are so gentle to the environment, the smell is wonderful, and it's so easy to make why not give it a try? Go green with this lavender laundry detergent and take pride in knowing you whipped it up yourself! 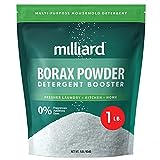 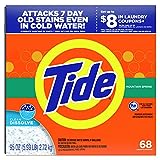 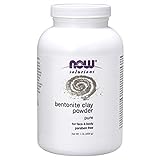 What Are the Ingredients?

Borax is a salt of boric acid and a mineral also known as sodium borate, sodium tetraborate, or disodium tetraborate that dissolves easily in water. Borax has a wide variety of uses. Some of these uses are in detergents, cosmetics, insect repellant, fire-retardant, and as a texturing agent in food. It's a substance which is naturally occurring to certain evaporating lake beds. It has many properties which act to produce a basic solution in water, boosting the cleaning ability of other substances and maintains a stable pH balance. It also inhibits the metabollic processes of many organisms, killing and ridding your laundry of unwanted pests.

Washing soda is an alkaline known as sodium carbonate. It isn't the same as baking powder although the two are closely related. It's not the same thing as washing powder, which is soap, so be sure not to confuse the two. It can be derived from plant ash or common table salt. Washing soda will not only remove stains, it will also adhere to minerals in the wash water, softening the water and allowing easier rinsing of residue. It also cares for the dyes in your fabrics, helping them to adhere.

This is, believe it or not, the primary ingredient in OxyClean. It's an oxidizing agent which is an excellent cleaning agent. It's found in many household cleaning products. It dissolves easily in water eventually decomposing into water and sodium carbonate. I have purchased it online in bulk from soap making suppliers. It's not hard to find. If you can't locate any, you could substitute OxyClean, although the original form is better.

Another natural ingredient, bentonite consists mostly of montmorillonite clay and is formed by weathering volcanic ash. It helps to bind to oils and impurities in your fabrics so they can be rinsed out and acts as a medium for dispersing the lavender essential oil.

Lavender essential oil is the pure volatile oil which remains after lavender flowers and plants have been distilled. It not only smells clean and fresh, it's also an excellent anti-fungal, anti-viral and antibacterial to ensure your clothes are clean and germ-free. Another nice side effect of the lavender oil is the fragrance also imparts a wonderful calming effect. You can read more about the benefits of lavender here.

Combine the washing soda, borax and sodium percarbonate carefully into a plastic container. Be careful not to inhale as this will dust up. In a separate container, mix the bentonite clay and the lavender essential oil. Mash this mixture around until the lavender has been evenly incorporated into the clay. It should still be mostly powdery. Add this to your powders in your container, cap it and shake well to mix everything thoroughly.

Use ¼ cup per standard size load.

Medicinal Value and Other Uses of Saffron

Hubbing is fun! If you enjoy writing and want a great community to be part of at the same time, sign up!