Household Safety: How You Can Protect Your Home And Family With Fire Extinguishers, And CO And Smoke Detectors

Few things are as important in life as keeping yourself and your family safe. Every day there are things in your home or office that can cause life or health hazards, including those that can cause fire. You may have old appliances, old wiring, fautly wiring, cooking, a fireplace or any number of items that could cause a disastrous event.

Planning ahead and preparing yourself and your home or office to best deal with a fire emergency is the only way to give your family or your coworkers the ability to survive such an event. Part of that planning should include purchasing and installing or servicing smoke detectors, CO (Carbon Monoxide) detectors, and fire extinguishers. Below you will find some information on each of these items, how or where they should be placed, and when they should be serviced.

The Ionization detector works by using a small amount of low level radioactive particles. These particles allow a small electrical current to pass through them which is interrupted if even the smallest amount of smoke particles pass through it. Ionization detectors are prone to false alarms due to their sensitivity and ability to be set off by dust and other particles in the air. They are, however, more likely to alarm earlier in the case of a rapid burning fire and are less expensive.

Smoke detectors can also be either hard wired or strictly battery powered. The hard wired detectors also generally have a battery backup. Another option is to buy detectors that communicate with the other detectors in the house through a wireless connection. If you are not going to have an alarm system installed, this option is great. When one of these detectors is in alarm, all of the detectors sound, thereby making it easier for everyone in the house or office to hear the alarm and evacuate. 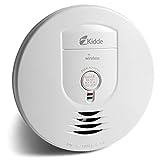 While smoke detector placement requirements are much more strict for new construction, placing detectors in a home without them should still be done with certain things in mind.

Be sure to consult with your local building inspector or fire inspector for laws on new buildings or placing detectors in places of business.

Do You Have Smoke Detectors, CO Detectors, Or A Fire Extinguisher In Your Home Or Office?

CO Detectors are alarms that detect small amounts of Carbon Monoxide in the air. These detectors have several different designs that measures CO through different methods. CO detectors, for the most part, will begin to sound an alarm at low levels of CO after a few minutes, or quickly if a larger amount of CO is detected.

The importance of having a CO detector is largely due to both it's deadliness and its physical properties. CO poisoning can cause symptoms ranging from headache and nausea to death. Along with Hydrogen Cyanide, CO is considered the most common killer in smoke, and thereby the most common killer in fire deaths. More commonly, people will have effects of CO poisoning when CO is produced through fireplaces, heaters, and other appliances that burn fossil fuels. Because CO is both colorless and odorless, it can be building in your home and you may not know it until it is too late.

Because CO is more likely to be coming from fossil fuel burning appliances, it is best to place CO detectors near these appliances. Please consult your local building code to learn of any other requirements on the placement of CO detectors.

For years Americans have been encouraged to have a fire extinguisher in their home, preferably in or near the kitchen. Most homeowners place great importance on the installation of smoke, heat, or even CO detectors, but many forget about having a fire extinguisher. Sadly, many fires in the home or office are in their initial stages when found by the inhabitants or detected by alarm systems and could be put out or slowed enough to avoid a large amount of damage if only there were extinguishers nearby or if there were people there who knew how to use them.

Extinguishers used in the home are generally Drychem extinguishers that use a dry powdery chemical to stop the fire's ability to continue. These extinguishers must be sprayed at the base of any fire, not at the flame, and therefore must be used at a shorter distance than what some people would feel comfortable with. However, if a person uses the extinguisher from too far away, or does not properly aim it, the fire still may be weakened or slowed.

Fire Extinguisher Use And Placement

For placement of fire extinguishers in new homes, please be sure to consult local fire safety laws. If you are looking to place one in your home, it is best to place it near or in your kitchen. Some people place them in a kitchen cabinet, which may not be a good idea due to the fact that you may not remember it if you don't see it. A good place for one would be by a pantry, in or near the entrance to the laundry room, or in a entrance way near the kitchen.

If you have an extinguisher in your home, be sure to check your extinguisher periodically. The extinguisher should be free of damage, without any powders leaking from it, and the gage on near the handle should be fully upright in the "charged" area. Be sure to inspect your extinguisher every time you change the batteries in your smoke detector (recommended every 6 months, or when the time changes to and from daylight savings time).

How Does This Household Safety Info Rate?

More Hubs By This Author