How Does Esio Home Beverage Dispensing System Compare with the Popular Keurig Models?

This year, 2012, the Esio Beverage Company unveiled its new home dispensing beverage system called Esio Hot and Cold Countertop Beverage System. Established in 2005, the company has now seized the opportunity to enter the popular home dispensing systems’ market. But how does their kitchen appliance compare with the favorite Keurig models?

- Esio has the patented dropndrink technology, which allows users to switch from hot to cold beverages or vice versa quickly without crossing over flavors. The Keurig Company, founded in 1998, has the Single-Serve Brewing System. It allows users to make one beverage –hot or cold. However, they have recently introduced the new Vue Brewing System with upgraded and additional features.

- The Esio unit features: two built-in reservoirs or tanks, one for hot water, which takes five minutes to heat up (though some users say its more like 15 minutes) then remains piping hot, and one for cold water, which takes 30 minutes to chill (though some users report it takes 45 minutes) then remains ice-cold. The tanks hold about two gallons. All Keurig units have one built-in tank with water capacity ranging from 48 ounces (oz.) to 74 oz.

- Other features of the Esio Beverage System include color-coded hot (red) and cold (blue) selection buttons; a 15-setting strength selector dial, so you can control the strength of your beverage; the ability to use any type and size container of your choice; and a child safety lock.

- Other Keurig features include buttons to make hot beverages and one iced beverage. The new Vue unit allows you to make multiple hot and cold beverages, and control the strength with the strength control button. This series also has buttons to control a wide temperature range, and to adjust water pressure, timing, and air flow (for froth). The buttons on most Keurig models including Vue are LCD touchscreens. Some as the B70 Platinum and the B155 models have digital clocks. The B155 also has multiple language control: English, French, and Spanish. They all have a removable drip tray, which accommodates one to eight brewing sizes, depending on the model of the single-serve system. Brewing time ranges from under one to two minutes. They also have a drainable tank and an auto on/ off indictor.

- Esio’s beverages come in their patented MultiServe E-Paks. Each pak has an insertion pump; is reusable; reseals automatically; needs no refrigeration after opening; has a one-year shelf life; and does not take up much storage space (measures 3 square inches). The Keurig K-Cup and Vue Pack/ Vue cup have filters, bags, aluminum foil lids; are non-reusable; and have a three to twelve months shelf-life, depending on beverage.

- One E-Pak makes about 14 8-oz. servings, according to the company. The Keurig K-Cup and Vue Pack are both single-serve –one use.

- E-Pak beverages and water from the reservoirs blend in mid-air (some users complain of splashing with small containers). K-Cups and Vue Packs beverages brew within the unit.

- Both units are simple and user-friendly.

- Both companies offer a one-year warranty with purchase.

- Purchases could come as packages with E-Paks for Esio and K-Cups or Vue Packs for Keurig. 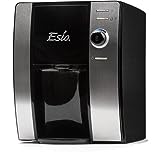 Which is your favorite Keurig Single-Serve Home-Brewing System model?