How Does My Garden Grow And Grow

Hi my name is Carolyn, I have always loved gardening and wildlife. I even spent 15 years working in a garden centre, I loved it!

It's September 2015 and my beloved husband has just died. The world has gone to "Hell In A Handbasket".

But with help, from friends and family, Christmas comes and goes and a new love enters my life. Yes I know it's quick, but he was one of our dearest friends when we were young, and it is good.

I want to get my neglected garden back to what it once was many years ago, and my dear man Eamonn is more than ready to help me.

The quote below is so very true to me,

This is the story of how we are making it happen.

The glory of Gardening:

Hands in the dirt, head in the sun, heart with nature.

To nurture a garden is to feed not just the body, but the soul.

The front Garden Before

Overgrown And Full Of Broken Things

The front garden was once lawn and flowers. Then we had one of the most destructive dogs on the planet. The only surviving plant, a Myrobalan Plum, self set from a stone.

I did tidy up once more, but over the years, and with total lack of interest from hubby, and then ill health, it deteriorated to an overgrown dump for rubbish. Lovely!

Important Note to Self, Remember To Set the Date Correctly On The Camera.

Sorry but I always forget and many of these photo's may be years apart in date, but I assure you not in time. Ooops

Fuchsias hardy or not, are much loved by Bumble Bees and flower for months

Other than the plum,

A wonderful evergreen shrub with tiny flowers that hang down like catkins in the late winter and early spring. It will grow just about anywhere, and fast! Good job you can cut it back hard. Pruning just after flowering stops you losing next years tassels. I have had this one for years and have never seen so much as a nibbled leaf on it.

Cannot remember the variety, but it is happy in the shade, the house faces North, and it flowers most of the year. The bees love it.

Came up from seed. This needs no explanation as they are often weeds, but so easy to look after, just cut back hard in the autumn.

All the rubbish, unwanted plants and as many weed roots and suckers as you can.

Do not dig deep all over, you will make it soft. Just scrape and rake it flat.

This is IMPORTANT ! It stops weeds, allows water to drain away, and stops your gravel mixing with the soil. There are many types and sizes, and as many prices. What you must do is allow a good overlap between the sheets.

Choose your gravel carefully, if you need to walk on it small, or pea, gravel gets stuck in the soles of your shoes, and cats often go poo in it. For large areas buy in bulk. We did. A cubic meter bag covers about 20 square meters to 5 cm depth. (But I do not rate my maths very highly) We found having the bags put on the ground we wanted to cover and scooping and throwing with plastic buckets the easiest method. It is hard work and you get dirty, so look for volunteers to help.

We chose this river gravel from the upper Nene Valley Pits as they are only a few miles from where we live. We decided it was more appropriate than say, Slate from Wales, or Scottish Black Sea cobbles

We chose to just place the gravel around the edge of the garden and plants, this is so we can add bulbs at a later date.

But against the paths we used some long branches we had available. No one wants to be constantly sweeping stones back into place. You can get special mowing edges to use around lawns.

My House. The one with all the trees 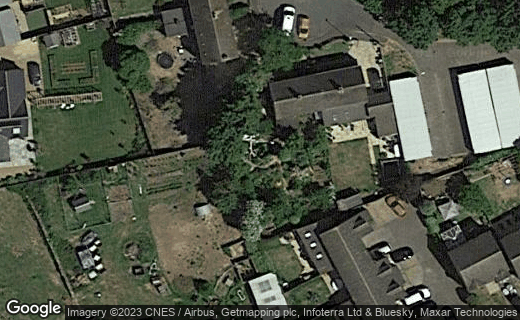 Ah, Sigh, it used to be full of vegetables and herbs but was later filled with shrubs and flowers.

Then it went the same way as the front garden, only more so. The rubbish could not be seen under the growth, ivy, brambles and shrubs covered everything, including the flat roof.

It was so bad even the thistles and bindweed struggled to survive.

Back garden and flat roof

A beautiful deciduous shrub, arching branches carrying clusters of lilac/purple flowers along it's branches. The smell good and attract bees and other insects. It needs to be kept in hand or it will overtake every thing. This is another plant that will happily spread suckers around if you let it. It flowers on the growth from the previous year, so we are looking forward to many flowers after hard pruning it after it flowered. It has many new shoots.

We Left Enough To See Them Flower

First the shrubs had to be cut back hard.

Literally we started at the out side edges and worked in.

You need good thick boots, gloves, tops and trousers to tackle this sort of overgrowth. Not to mention some kind of eye protection.

The shrubs were cut back really hard, the brambles and ivy hacked to the ground and dragged away. We were lucky enough to be able to have bonfires, very big bonfires.

When the digging began, as many weed roots as possible were pulled out and burnt.

This does not mean they did not keep coming up, blackberries go a Looong way down. But constant hoeing keeps them down.

I even managed to grow some vegetables this year. Yum

One of our many Bonfires. Twisted Fire Starter

Check your local rules on bonfires

I really thought we may have killed the Grape Vine, but no. It clambers up the apple tree once more

Ode To The Spring

Oh! What a dull and dismal scene

No sunshine lately has there been,

Just lots and lots of rain have shed.

But look around you and you may,

See signs that spring is on it's way.

The snowdrops now are shining white

and the daffodils have found the light.

The Robins sing their cheery song,

To help the winter days along.

So let us all be of good cheer

For sunshine days will soon be here

Some Of Our Home Grown Vegetables and Flowers

Loads more work to be done in this part of the garden, but at the moment it's all hands on deck for the side piece

If we have a bit of ground, even a window box, we are savers of the planet

Isn't it enough to see that a garden is beautiful without having to believe that there are fairies at the bottom of it too?

The Side Of The House

We have Reached This Stage

Trees Taller Than The House

Six conifers taller than the house and 2 totally overgrown shrubs ruled over nettles and ivy. But my intrepid adventurer Eamonn bit the bullet and hacked them down!

This was no easy task, hiring professionals was an option we could not afford. Eamonn does not do well with heights, all offers of help and a larger chain saw never came to fruition. But we did it together, with help from a strong rope.

Unfortunately I could not take photos of us landing on our bums (more than once) when the branches came down, but by tying ropes and cutting and pulling in the proper direction, we missed the house and fences.

Courage is being scared to death... and saddling up anyway

Dealing With The Slope

A slight slope was on the garden, and what better way to level the soil, than to hold it back with tree branches.

After all we had plenty to go round.

We buried them down a few feet or they would just fall over.

Eventually they will rot but hopefully the plants we are adding around will take the strain by then.

After leveling the ground we put down rubble for a firm base.

We were lucky enough that our neighbour had just demolished some old barn walls.

The bricks were perfect for the task. The pigs were highly amused by Eamonn wheel barrowing them across their paddock!

Then we laid a good cover of sharp sand over the top.

A few basic tools are required for this task, a good spirit level, a trowel, piece of strong plank and some thing like a sledge hammer. Oh and knee pads are a REALLY good idea.

Eamonn sprinkled a little dry cement under each slab, made sure it was level with the others. Then placed a board over it and GENTLY tapped it flat with the hammer.

These slabs break quite easily, but we only had a couple of accidents!

He put a slight slope on the area to let the rain run off in the required direction, a must do thing.

November In The Garden

Well it's November, the year has flown away.

We have memories of hard work, bruises and bumps, but also of laughter, smiles and sunny days.

I also have garlic bulbs growing ready for next year and still some flowers around.

The photo's are below.

My View Of The Park

In pictures so far!.