Have you seen this thing? This is a potty that is fit for a king. They call it the Infinity XLC-3000-EW Bidet Toilet Seat, I call it amazing. What can I tell you about this toilet seat? Okay, First if you are looking for a run of the mill toilet seat under $35, this is not for you. It has an on-demand heating system. Yep, if you want a real hot seat this one is for you. It doesn't have to be hot but it will be heated with this ceramic system.

It is packed full (excuse the pun) of exclusive unique features that are sure to please. Hot and cold cycles and a Sitz bath feature too. With the adjustable temperature, soft close seat and dryer you have all the cool new items that every toilet seat should have.

This toilet seat is so much more than that, really it is. There are so many features on this one it could take forever to talk about everyone. I really like it and I got to use one, which was very fun. When was the last time you could say that going to the potty was fun? 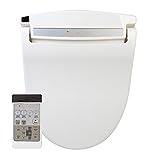 My Buddy Has Too Much Time On His Hands, He Bought One.

I would not have known about this new toilet except my buddy Jack bought one. Yep, that's right. I went over to his house and stayed there for a week and I got to use his throne of kings. Jack was telling me that he had to call the company because they sent him the wrong seat. He needed the round seat and they sent him the elongated one. He was also upset because his remote control was scratched. Now, if you are like me, you are thinking...what the heck does a toilet need a remote control for?

Yep, that was my first thought....well until I sat on it and Jack showed me how the remote worked. I have to tell you this thing is amazing. Look, I don't care if you buy one or not, just go look at it and if you know my buddy Jack, stop off and tell him you have to use the potty. Jack will be more than willing to let you read the manual, make you coffee or tea and let you use his throne of kings. Jack is a people person, he is kinda friendly like that. I know, it's a little weird.

More About This Thrones Of Kings

People who have bought this thing, including Jack seem to like it. Heck, even I like it. Now, at just under $350 to $400, I'm not buying one. However, I have no problem using Jack's. The remote uses 2 tripple a batteries and Jack tells me the toilet is rated at 1250 watts. That made me a bit nervous. I mean, who rates a toilet seat or a toilet in watts?

One feature I really loved is that the seat closes with ease and it is very quiet. No slamming of the seat on this model. That is really awesome in the middle of the night when you are trying to keep quiet. My first thought was: Jack won't even know I'm using this King Throne with the seat that silent. I almost forgot that I had to flush it.

You can use the water shut off feature too. You can do this without reaching under the toilet. It's quick and easy to use, turn the water off if you need to with ease. This is perfect for older people or someone who needs to turn the water off before vacation and stuff like that. You can turn it back on just as easily. Both Jack and I like that idea too.

Jack's dad seems to love it too. As an older man, it was often hard to get his bottom clean (or so he tells us) with this model of the throne, it is much easier. When dad has his back operated on and was recovering, when he was allowed out of bed, this toilet made it much easier on him and Jack too.

How Much Would You Pay For A Toilet Seat?