How to change an outdated room into a modern, classic design using vintage design elements.

Recently, I remodeled my first floor powder room from a distinctly Victorian design style to what I thought was a more modern design style. But when I showed the completed room to my artistic aunt she said in one breath, "Wow, this looks really updated!" Then in the second breath, she told me her grandmother had bead board in her bathroom. My aunt is in her 70's. I wondered, how does a Victorian design instantly become updated to modern while encompassing vintage elements at the same time? As I researched design styles, I became more confused. I found a furniture store online selling "classic" furniture that looked like something from 16th century France. This is not what I consider classic. Can it really be so arbitrary? What is the magic formula? Lets take a look at the power room in question. 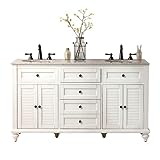 When I decided to take my powder room from builder grade chic to the style I was infatuated with at the time, I set out to create the perfect Victorian Powder Room. (Never mind the fact that Victorians did not have powder rooms). I scoured wall paper books for hours hunting for the perfect flower motif that would set my powder room apart. I finally settled on a paper that had beautiful pink roses on a sage green background. This was the only paper I could find that gave me that Victorian "feeling." (Could feelings be the thing that defines styles?) Anyway, this was the one, I decided, and soon the walls were covered with an English garden. For the vanity, I wanted something that looked like a piece of furniture. That style is popular now, but 10 years ago it was only popular with antiques enthusiasts who would turn an actual dresser into a bathroom vanity by retrofitting it with a sink basin. If one did not want to go to all that trouble, it was almost impossible to find anyone manufacturing this style of vanity. By sheer luck I think, I was able to find one in, of all places, a big box store. It was the only one they had, literally. Made of cherry wood, it is a beautiful piece to which I lovingly added green glass knobs in order to further enhance the look I was after. But the piece de resistance, was the sink basin, a custom piece I found at a high end plumbing store. It is a ribbed basin with an offset drain and lovely pink roses painted around the top. It literally took my breath away when I first laid eyes on it. I placed a beveled frameless oval mirror above it with wall sconces on either side that were converted from a light bar. The fixtures were brass, of course, even the toilet handle and the cherry hardwood floors completed the look. We finished the day before our Christmas day celebration and I was thrilled with the end result. For many years the powder room was source of pride for me. I was so surprised when one day I found myself apologizing for it. Evidently, my tastes had changed and an update was in order

I recently visited the gulf coast and was inspired by a friends beachy white designed home. It felt so fresh and relaxed even though everything was white. (There are the "feelings" again). As soon as I got home I began planning the changes I would make to my home. Just like I had Victorian style on the brain before, it was replaced with coastal style. Really, I wasn't altogether sure what that was. The all white look was over the top for me, but I thought something in the middle would work beautifully. I tried the style out first on my office and studio remodel and believed I was successful when my niece said, "It looks so beachy!" My office was painted a light gray, with rustic grey/brown laminate flooring and I pulled together as much white furniture as I could. The desk took months to find and was ordered from Overstock. It wasn't exactly what I wanted, but it suffices and is very functional. Besides a white wicker table and leather easy chair that I already had, the rest of the pieces were sourced from craigs list, TJ Max and Tuesday Morning. I went with a distinct color pallet for the first time ever. Even the artwork was carefully chosen with one piece created just for the space. I had a built in made which had bead board on the doors and I also put bead board on the stair risers. That's when my love affair with bead board began. I decided I would replace the English Garden in my powder room with bead board.

How To Remove Wallpaper

I was a little daunted at first by the task of removing of the wall paper, but then I discovered a trick that I wish I had known about years ago. Have you ever had the delightful task of removing wall paper? If you have, you will relate to the sheer effort and time it takes to accomplish the job. Following the advice of experts in the past, I tried to remove both layers of the wallpaper at the same time, the top layer which is normally vinyl and the backing which is what originally held the glue. I used the scoring tool, which typically left marks on the wall because I always pressed to hard, but no matter how much I scored, the wall paper was stubborn to come off with this technique because the glue dissolving solution can not penetrate the vinyl layer very well. This often resulted in tiny pieces coming off and therefore taking FOREVER to do one wall.

This time, I abandoned the wall scoring tool and instead began removing the vinyl layer first. It came off fast in large pieces, sometimes one whole panel at a time. Starting at the top of the wall, I applied the glue dissolving solution on the backing layer using a spray bottle with stripper that I purchased at a big box store. (I prefer the spray bottle verses the bucket and sponge technique because I don't like the wet solution running down my arm into my armpits). Some experts recommend using fabric softener and some say just plain water or steam will work. I chose the glue dissolving stripper because I wanted it done fast and easy which is what happened after waiting only about 2-5 minutes for the stripper to work. Using a putty knife, began lifting the backing from the wall in large pieces. I had the whole room done in about 2 hours. I was thrilled. This was the easiest wall paper removal I had ever done.

The next step is to wash the walls in order to get as much glue off as possible. But, no matter how many times the sponges passes over the wall, the glue will still be there, all slimy and gooey. Therefore, it is important to use an oil based primer on the walls before applying paint. If this step is skipped, it could result in the latex paint reacting with the glue causing buckling and peeling. Fortunately, there are no low order oil based primers these days. Traditionally, they stink to high heaven.

How To Remove Wallpaper

My Love Affair With Beadboard

With the wallpaper gone and the walls primed, I am now ready to start adding the new design elements to the room. I installed beadboard with a trim piece at 41 inches high along with a wider 5 inch baseboard painted out with dove white trim paint. The walls were painted a medium gray in a satin finish. I kept my beautiful cherry wood vanity and sink basin with the pink roses but updated the faucet to chrome. Chrome knobs also replaced the green glass knobs on the vanity. The oval mirror was rehung but the wall sconces flanking it were also changed out to chrome. Yes, even the toilet handle went chrome. I kept the rest of the design elements to a minimum, using chrome or mercury glass. On one wall, I added a large 20x30 black and white print of a 200 year old oak tree dripping with Spanish moss. It doesn't seem like I did that much, but the difference was staggering. My busy Victorian powder room became updated instantly using classic design elements.

In my opinion, classic means a sophisticated style that never goes out of favor. It can transition into many different styles like, modern, coastal, shabby chic, cottage, farmhouse, rustic and traditional. It is not fussy, but streamlined with clean lines. This is how my powder feels updated yet has the design element of wainscoting used a century ago. Is it any wonder why I am in love with bead board? I have also taken it into the hallway. It won't be long before it's found it's way to my dining room. Is there such a thing as too much? I guess I will find out.