What Can I Do to Help the Environment?

Susan May Gudge has always been an advocate for a cleaner, better planet by writing articles and giving speeches about relevant topics.

Is Global Warming Real or Propaganda?

I don't know if you are all sick and tired of hearing "Go Green!" or "Stop Global Warming!" I know I am. I have always been a tree-hugger but we are really going too far with all the hype. People, including politicians and media, are jumping on the bandwagon for glory and riches.

It seems like everyone is being pushed towards fighting global warming because they have nothing really to demonstrate anymore. There are no great wars to report, pulp and paper companies are replanting, factory smokestacks are forced to filter air, cars no longer use leaded gasoline and they have to have pollution devices. What is left for a society of people that like to demonstrate and hold up signs? Global Warming gives the politicians something to stand for, news reporters something to report, gives people something to talk about and it causes people to get involved in something they want to believe is important.

Ice ages come and go. They always have and always will. They cannot be predicted. There is no pattern to it. None at all. The planet has warmed up and cooled down continuously since the beginning of time. Scientists know this. If it is time to melt, the ice caps will melt. If it is time to freeze and cover the land in mile high ice sheets, it will happen. And that, is fact.

Trees are extremely important in maintaining the quality of the air we breathe. Long ago, we protested the stripping of the forests and the complete stripping of mountains for the lumber. We need wood, that is a fact. We knew, even way back then, that the trees were our air filters and although we needed them as wood or paper, we needed to make sure they were a renewable resource. We protested, we yelled and screamed, some people chained themselves to trees that were to be cut. Lumber companies were finally forced to replace trees that they took.

Now, we do not really need to recycle paper. The pollution from the 'factory' that recycles is worse than actually cutting another tree and replacing it. We won the war to save the trees, yes. That war is over. Now we need to educate the people on how to use less paper products, reducing the need to recycle.

One reason we are forced to recycle glass is that it takes a lot of room in the landfills. Empty space, a bubble. We are seriously running out of space in those landfills to put all our garbage.

Sand is melted to form glass. Sand is a natural renewable resource. It takes more energy resources and chemicals to clean the used glass, melt it down and form it into a new bottle. It be better for the planet to just smash the glass before putting it into the trash and not recycle it.

We have these companies here that deliver little plastic bags filled with store flyers, advertisements, free newspapers and magazines. In the winter, I save all my recycle things in a back room, hating winter and refusing to go out there. After four months, I had three piles...three inches of personal paper (envelopes from bills etc), three inches of advertisements delivered by Canada Post and three feet of those bags of flyers. The advertisement delivery company brags about having over one million customers in my city. That would be one million customers producing three feet of scrap paper each, a tower of paper three million feet high three times per year.

I tried for over a year to stop them from delivering the store advertisements. I called. I wrote. They still delivered. I put small signs on my mailbox saying "Canada Post Only" and "No Adverts" and they were ignored. So for about a month, on the times they came, I stood guard at the end of my driveway until they knew I was serious and they stopped delivering. It is a bit sad that I had to act crazy to get my point across.

It is not about recycling, it is about abusing a resource. We should not accept all that spam, without a thought. Now, we just shrug and say "Oh, well, it will be recycled." Sure it can be recycled, but is that really a good thing when we just use too much for no reason?

My city politicians incorrectly corrected the problem of all this waste paper, plastics and cans. They replaced our foot high recycle boxes with new and improved four foot high boxes. And so, like all politics, they solved the problem by making it worse. They think we have nothing to complain about since it all fits neatly in the box. They should, instead, try thinking "out of the box".

The city, trying to solve the problem, gave us bigger boxes with lids. They have these trucks now that have no men hanging off the back. There is just a driver who runs a claw type thing that lifts and empties the boxes. Problem is they only put the claws on side of the truck. That means that the truck has to go up the street and then down again. I live in a big city. Imagine the gas and pollution of those trucks doing thousands and thousands of small roads twice.

Recently, they introduced the recycle boxes for composting materials. This means another truck doing the same routes, again twice.

Following the same recycle routes are the garbage trucks. For safety reasons they only pick up on one side of the road. I can see a garbage man being wiped out by cars impatient to pass the truck, so I can understand that. Unfortunately, those garbage trucks now go up and down the streets like the recycle trucks.

Now, counting recycle and garbage pick-up, that comes up to six trips by three trucks for thousands of streets. There is a simple solution but either nobody has thought it out yet, the million dollar studies are not in yet or they know people are going to complain more about having to walk 10 ft than they would about bad air, overuse of expensive gas and us paying more for those trucks.

Solution: Put all garbage and recycles on one side of the street, depending on address numbers like we do for watering our lawns. We can only use water outside for gardens and car washing on the days of the month that coincide with our house address number. Even number houses use water on even numbered days, odd number houses can use water on odd numbered calendar days. For garbage and recycling, if the pickup day (Monday here) falls on an odd number then it goes out onto the odd numbered side of road. It is only a matter of walking across the street to deposit your garbage cans or recycle bins. Then you have three trucks going by just once. 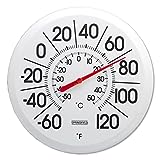 Springfield Big and Bold Thermometer with Mounting Bracket, Indoor Outdoor Thermometer with Large Numbers for Patio, Pool, and Indoor Areas (13.25-Inch)
I have a thermometer like this out in my garden. I can see it from inside the house. It is always nice to know how hot it is (or cold) before I go outside. This one has both Fahrenheit and Centigrade with large, easy to read numbers.
Buy Now

They can scream Global Warming all they want. As a Canadian, I really don't see the problem when I sit here in four feet of snow and -20C (-8F) temperatures.

The last two winters have been gentle. I find that most of the people screaming global warming are the ones who have for decades enjoyed the heat and are now finding out what it is like to live with cold weather, while us Canadians are finally enjoying the tropics without having to travel. Last summer had to have been one of the most beautiful I have seen in years. This winter we have only received about a foot of snow, compared to four or five feet regularly received in a Canadian winter. If this is global warming, I say bring it on.

Are you worried about Global Warming?